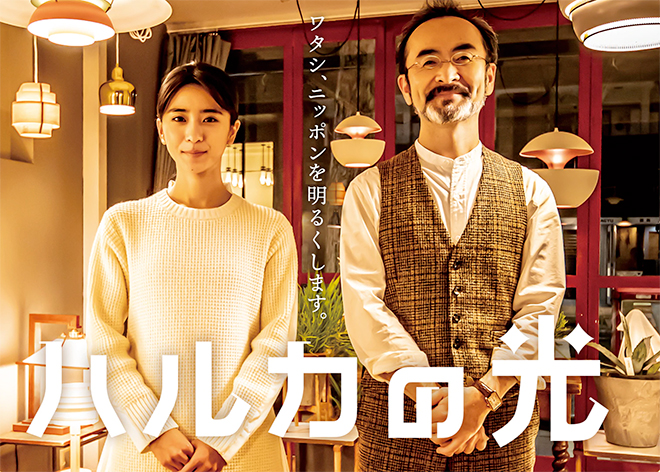 Story
Komoto Haruka only thinks about lights the whole day. Lighting is more important to her than romance. She works as a shop assistant at éclat, a shop in Tokyo managed by Nishitani Shinichi that brings in iconic lights. One day, Okabayashi Ichiro who is the chef of an established sushi restaurant visits the shop and repeatedly asks them to sell him a light bulb. However, Haruka flatly refuses and tells him, “Coming here demanding only a light bulb is like asking for tapioca at a sushi shop.” The chef angrily leaves the shop but several days later, he visits again for some reason. In fact, he confesses that his wife recently died all of a sudden and even the light bulb in the restaurant blew. What caught Okabayashi’s attention was a pendant light from Finland. It is a piece that the Finnish architect and designer Alvar Aalto created together with his wife. But the chef’s wife Aino died at the relatively young age of 55. Made of brass, the pendant light has more character the more it is used and she tells him that it is a light that attracts people even though it is not a light that illuminates a large area. All sorts of people visit the shop every day. While Haruka turns down customers with the attitude that “any light is fine”, she feels a sense of mission to wholeheartedly serve those who seek light, dispel their anguish and enrich their lives by illuminating their lives. In the process of telling people about the beauty of lights and choosing the right lights for them, light is brought to people’s lives. Haruka herself begins to overcome her own emotional scars and find a ray of hope through her numerous encounters.

Characters
Kuroshima Yuina as Komoto Haruka
An enthusiast of lights who is a shop assistant at éclat, a shop in Tokyo that brings in iconic lights. She is a native of Miyagi Prefecture and lost her house and many friends during the Great East Japan earthquake. When her father who is a fisherman returned from his first fishing haul one year after the earthquake, she felt saved by the fishing lights in the dark sea.

Furutachi Kanji as Nishitani Shinichi
The shop manager of éclat. Komoto Haruka was enchanted by a certain light that she encountered at this shop when she moved to Tokyo and ended up working as a shop assistant.

This blog contains information and musings on current and upcoming Japanese dramas but is not intended to be comprehensive.
View all posts by jadefrost →
This entry was posted in NHK, Winter 2021 Dramas and tagged Furutachi Kanji, Haruka no Hikari, Issey Ogata, Kuroshima Yuina. Bookmark the permalink.