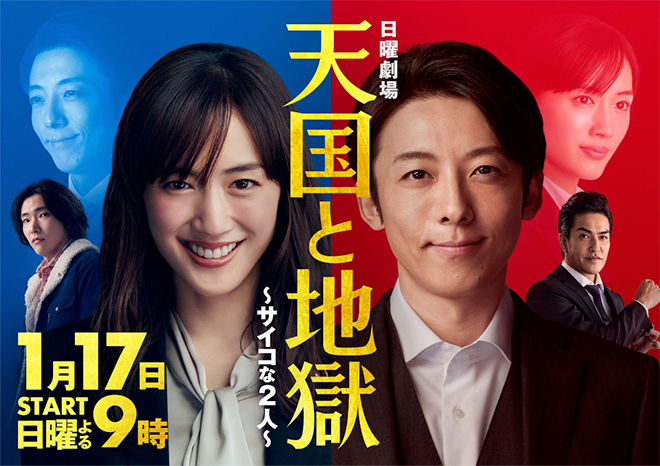 Story
35-year-old Mochizuki Ayako is a detective who is a hard working, righteous and ambitious. She is the type who irks bosses and the people around her with her personality and focus on how things “should be done”. One day, a bizarre murder happens and Ayako, who has been suspended for a mistake in an earlier case, rushes to the scene to find pachinko balls packed inside the dead person’s mouth. She finds the horrible nature of the crime at odds with the freshness of the crime scene which seems to have just been cleaned. The easygoing Watanabe Riku, her housemate who survives on part-time work and is a complete leech, clears her doubts. He works part-time in a cleaning job and knows about special industrial cleaning agents that have no smell. The manufacturer of such cleaning agents is a start-up called Co Earth. The CEO of Co Earth Hidaka Haruto is the very man who had given Ayako a mask on the train a few days ago when she realised that she was the only one not wearing one after hurrying out of the house. Armed with this knowledge proving that Hidaka is a material witness in the murder case, Ayako goes to meet him in the hope of redeeming herself as a detective. Little does she know that Hidaka, a chemistry researcher and shrewd entrepreneur with a smart, nice guy persona, hides a psychotic, murderous nature. Unfortunately, Ayako somehow swops bodies with him. Will Riku who is the only one that she can lean on be able to detect the changes in Ayako? Furthermore, Ayako has to contend with a senior detective Kawahara Mitsuo who can be called her nemesis. He is very capable and will do anything in order to get results. Now that Ayako and Hidaka have switched places, they are filled with anxiety every day over the possibility of a momentary error of judgement as their status, personality, use of words and behaviour are complete opposites. Over time, their values are shaken to the core. They are also in for an unanticipated truth and romance.

Characters
Ayase Haruka as Mochizuki Ayako
A detective with the Tokyo Metropolitan Police Department’s First Investigation Division. She is hardworking, righteous and also ambitious but panics easily. She has failed many times and is considered a burden by fellow detectives because she goes headlong into something once she gets an idea into her head. While scrambling to solve a bizarre murder, she unexpectedly swops bodies with Hidaka Haruto.

Takahashi Issei as Hidaka Haruto
A capable young entrepreneur who launched a start-up and the son of the wealthy family that owns the large food company, Sunrise Foods. He is an extremely smart and nice guy who is completely unlike the typical intelligent and condescending people. However, this hides his true nature as a psychotic cold-blooded murderer. While being pursued as a suspect in a murder case, he ends up swopping bodies with Mochizuki Ayako.

Emoto Tasuku as Watanabe Riku
A part-time cleaning staff employed on a daily basis. However, he does not pay rent, utility bills and food expenses, and is only in charge of housework. He is completely financially dependent on Mochizuki Ayako. But to Ayako who regularly has many enemies, he is her only emotional support.

Kitamura Kazuki as Kawahara Mitsuo
Mochizuki Ayako’s senior and natural enemy. He is a competent detective and produces results but has an air of danger due to his willingness to do anything for that. It is rumoured that he has dirt on the higher ups and dispenses favours. This does not sit well with Ayako who has a very strong sense of justice.

Mizobata Junpei as Yamaki Hideo
Mochizuki Ayako’s junior and partner. He is typical of his generation in considering himself lucky that work is easy even if he gets stuck with miscellaneous tasks such as taking orders for lunch boxes and wanting to go back on time every day. He keeps getting reprimanded “leisurely Yamaki” by Ayako.

Nakamura Yuri as Itsuki Juri
A secretary at Co Earth, the start-up that Hidaka Haruto runs. As a university schoolmate of Hidaka, she knows the most about him and is his right-hand person. She wishes to be of some help to Hidaka who needs her, and has absolute faith in him.

Nomaguchi Toru as Igarashi Kohei
The director of Tokyo Metropolitan Police Department’s First Investigation Division. He always checks out his surroundings and his decisions depend on which way the wind blows. He considers Mochizuki Ayako, who gets enthused each time a case occurs and tries to distinguish herself, a nuisance.

This blog contains information and musings on current and upcoming Japanese dramas but is not intended to be comprehensive.
View all posts by jadefrost →
This entry was posted in TBS/MBS, Winter 2021 Dramas and tagged Ayase Haruka, Emoto Tasuku, Kitamura Kazuki, Takahashi Issei, Tengoku to Jigoku. Bookmark the permalink.