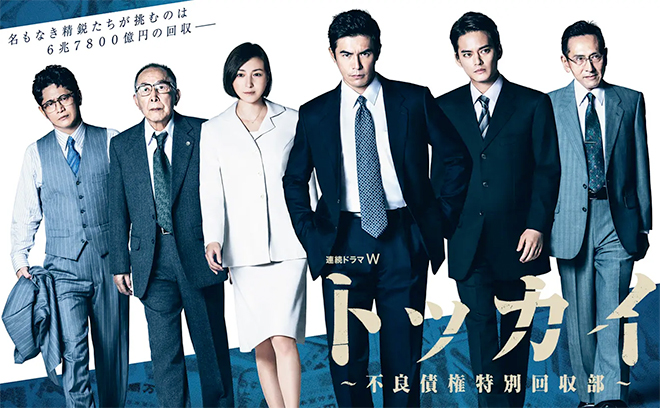 Story
In 1996, Shibasaki Akira who works for the Loan Department of Aoba Bank’s Yotsubashi branch, is seconded to the Home Financing Credit Management Organisation. Besides Tsukano Tomohiko who was also transferred from a bank just like Shibasaki, the former employees of failed home financing companies including Hayama Masato, Tamura Rei and Iwanaga Hisashi have been gathered at this government corporation aimed at collecting the bad debts of these companies that have gone under. The top priority of their CEO Tobo Heizo is to recover every single yen in non-performing loans and they are saddled with a staggering amount of 6.78 trillion yen. When the bubble economy collapsed, the government injected 685 billion yen of taxpayers’ money in order to settle the bad debts of the failed home financing companies, incurring the wrath of the people. That misstep 11 years ago will greatly shake the government’s monetary policy, the Japanese economy and Shibasaki’s life as a banker. The ones assembled at the frontline have to risk their lives facing off against vicious debtors including real estate tycoons and organised crime group order to protect taxpayers’ money.

Characters
Ito Hideaki as Shibasaki Akira
He is ordered by Aoba Bank on a secondment to the Home Financing Credit Management Organisation. He has strong ideals and intense anger, and takes command of the Non-Performing Loans Special Recovery Department, known as Tokkai for short, to go after the recovery of the 6.78 trillion yen.

Nakayama Yuma as Hayama Masato
He not only lost his job but also his girlfriend because Nikkoku Housing Loan, the home financing company he worked, for went bankrupt. However, he became a member of the Home Financing Credit Management Organisation and actively works at recovering the money. He is secretly in love with the older Tamura Rei.

Hirosue Ryoko as Tamura Rei
After First Loan Service, the home financing company she worked, went bankrupt, she became a member of the Home Financing Credit Management Organisation. She sticks to her convictions in the male-dominated environment and is passionate about her work.

Hagiwara Masato as Tsukano Tomohiko
Like Shibasaki Akira, he is a banker seconded from Sangyou Shinkou Bank. Because of his great pride as a banker, he is contemptuous of Hayama Masato and the others from home financing companies who have no positions to return to in two years but … …

Sakurai Yuki as Kosaka Mikie
A newscaster for the news programme Inside Focus. She objectively questions the changing times from the beginning of the bubble economy to its collapse and the subsequent fight by the Tokkai.

Yoshizawa Hisashi as Nishioka Junji
A hotshot lawyer with the Deposit Insurance Corporation. He is a strong ally who collaborates with the Tokkai in investigating assets in order to recover the non-performing loans.

Sasai Eisuke as Sudo Ryohei
A managing director of the Home Financing Credit Management Organisation. Before he joined the organisation he was with the National Tax Agency and has kept an eye on Kanamaru Takeo and Nishina Makio from that time. He supports the unknown organisation like Tobo Heizo’s right-hand man.

Watanabe Hiroyuki as Hakamada Toshio
The president of Aoba Bank. After the collapse of the bubble economy, he took the position of going all out to recover the non-performing loans and is highly sensitive to the people’s image of the bank.

Dan Jiro as Fuwa Seizo
The Chief Cabinet Secretary. He colludes with Nikaido Yoriaki and devises a scheme in the shadows of the people’s growing anger at the decision to inject 685 billion yen in taxpayers’ money to settle the non-performing loans of the seven home financing companies.

Sano Shiro as Nikaido Yoriaki
The head of the Ministry of Finance’s Banking Bureau that controls the financial industry. He is a key figure who worked out monetary policy to restrict total volume which may be one of the factors to cause the collapse of the bubble economy and steers the economy, which has been roiled by the home financing companies’ issue, behind the scenes.

Issey Ogata as Kanamaru Takeo
The king of Naniwa Real Estate, he covets money and women. He is quite an exhibitionist who calls attention to himself such as taking photos after dining with prominent figures. He is an upstart and at the peak, he obtained a trillion yen in loans from the home financing companies.

Nakamura Toru as Nishina Makio
He shot to fame after playing the role of negotiator in the Kyoto Buddhist Federation’s tax controversy. He gets a thrill not from acquiring wealth but of beating powerful people in mind games.

Hashizume Isao as Tobo Heizo
After making a name for himself as a righteous lawyer, he becomes the CEO of the Home Financing Credit Management Organisation at the request of the Ministry of Finance. He is a mainstay to the every member of the Tokkai.

This blog contains information and musings on current and upcoming Japanese dramas but is not intended to be comprehensive.
View all posts by jadefrost →
This entry was posted in Winter 2021 Dramas, WOWOW and tagged Hashizume Isao, Hirosue Ryoko, Issey Ogata, Ito Hideaki, Nakamura Toru, Tokkai. Bookmark the permalink.