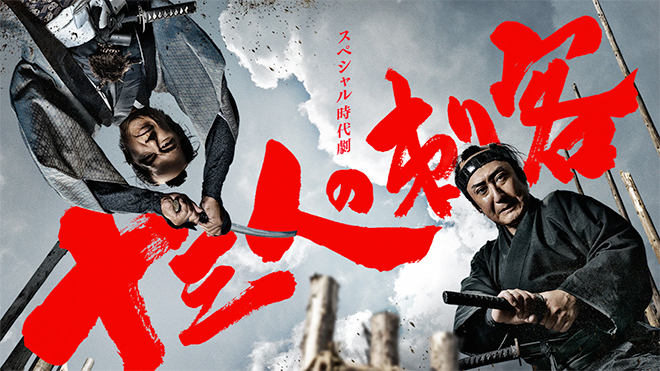 Date: From 9.00 p.m., 28 November 2020
Original Work: 13-nin no Shikaku by Ikemiya Shoichiro
Scriptwriter: Dobashi Akihiro (Oedo Great Journey)
Director: Kin Yuhiko
Cast: Nakamura Shikan, Satomi Kotaro, Fukushi Seiji, Oshima Yuko, Katsuno Hiroshi, Watanabe Dai, Kamio Yu, Okamoto Rei, Katayama Moemi, Iida Kisuke, Yamaguchi Shogo, Nakamura Fukunosuke, Tsuruta Shinobu, Watabe Gota, Ishibashi Renji, Nishimura Masahiko, Takahashi Katsunori
Synopsis: During the Tenpo era towards the end of the Tokugawa shogunate, the Akashi domain’s chief retainer Mamiya Zusho commits ritual suicide in front of the residence of Doi Oinokami (Satomi Kotaro) who is a member of the shogun’s Council of Elders. His death is a desperate act in protest against Matsudaira Naritsugu’s (Watanabe Dai) tyranny. Naritsugu is the younger brother of the shogun Ieyoshi and his informal appointment to the Council unsettles the shogun’s cabinet at the time. In response to this, Doi decides that emergency measures are necessary and orders the shogunate’s inspector Shimada Shinzaemon (Nakamura Shikan) to assassinate Naritsugu. Shinzaemon had considered leading a quiet life free from worldly cares and firmly turns him down. But he eventually decides to carry out the assassination for the sake of the people and begins to gather strong and trustworthy men whom he can trust. Someone catches wind of the plot that has been progressing in absolute secrecy. He is Naritsugu’s aide Kito Hanbei (Takahashi Katsunori) and a match for Shinzaemon in the sword. A little more than a month after Mamiya’s suicide, the Akashi domain abruptly leaves for their residence in the capital as part of the shogunate’s system of alternate residence. The group of assassins pursue the procession on the Nakasendo route which connects Edo to Kyoto but their surprise tactics are thwarted by Hanbei’s clever plan and their attempt ends in failure. Shinzaemon changes strategy and buys Ochiai, one of the post towns along the Nakasendo, which he converts into a stronghold to intercept the Akashi domain’s procession. On that fateful morning, the 13 assassins lie in wait as Naritsugu and his men enter Ochiai amid a thick fog. The front is blocked by a wall and the bridge that is their path of retreat in their attempt to fall back, crumbles with a loud noise. The deadly combat between the 13 assassins and 50 horsemen begins. Will Shinzaemon be able to defeat Naritsugu or will Hanbei be able to protect his lord until the end?
Official Website: www.nhk.jp/p/ts/9L6P4P6GPR

This blog contains information and musings on current and upcoming Japanese dramas but is not intended to be comprehensive.
View all posts by jadefrost →
This entry was posted in Fall 2020 Drama Specials, NHK and tagged 13-nin no Shikaku, Ishibashi Renji, Nakamura Shikan, Takahashi Katsunori. Bookmark the permalink.