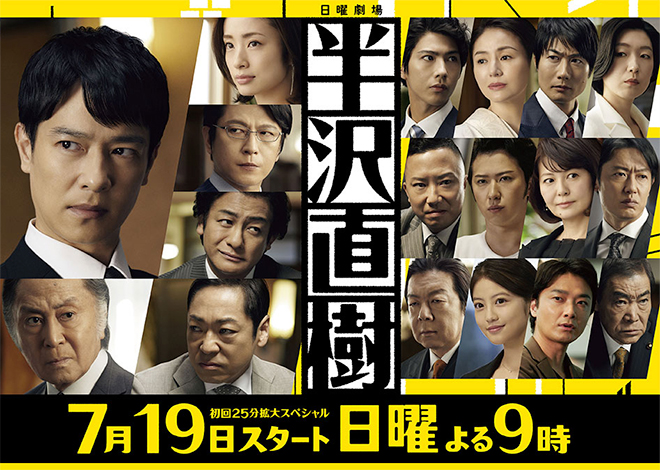 Story
The banker Hanzawa Naoki is ordered by his president Nakanowatari Ken to transfer from Tokyo Chuo Banking Corporation to a subsidiary, Tokyo Central Securities, even though he exposed the misdeeds of his nemesis, the managing director Owada Akira. He becomes the manager of the corporate planning department. The financial product development that he handles here is insignificant and no comparison to his time at the bank. In addition, he is shoved bad deals from the bank. The “proper employees” such as Moriyama Masahiro feel a deep-rooted inferiority to the “bank secondees” including the CEO Oka Mitsuhide and Deputy Director Morota Shoichi which foments antagonism and rebellion. Meanwhile, Owada has changed factions and makes use of the organisation to rebuild his position to protect himself while his loyal subordinate Isayama Taiji schemes to crush Hanzawa. One day, Tokyo Central Securities gets a big deal. Moriyama’s client, a large IT company called Cyber Acrobatics, offers to acquire Sena Yosuke’s Spiral which is one of the leading companies in the industry. With the cost of the share purchase expected to amount to over 150 billion yen, it is a deal on an unprecedented scale for Tokyo Central Securities. Seeing this as their chance to return to the bank, Hanzawa and the others are all fired up. What he has yet to realise is that there is some conspiracy behind this and it will trigger a new battle with the bank. Will Hanzawa be able to overcome the problems that keep happening at Tokyo Central Securities and inflict twice the pain on the people who make unreasonable demands?

Characters
Sakai Masato as Hanzawa Naoki
The manager of Tokyo Central Securities’ Corporate Planning Department. Even though he produced outstanding results at the bank, he was dispatched to its securities subsidiary after a struggle against the bunch focused on self-interest and self-preservation. He remains compassionate and always puts clients first. He is a person with mettle and sticks to his belief in giving double payback to any opponent for unreasonable things. However, in contrast to his energetic manner at work, he is no match for his wife Hana at home.

Ueto Aya as Hanzawa Hana
Hanzawa Naoki’s wife. She is the only person that the persuasive Hanzawa is no match for because she is the type who would immediately say what is on her mind. She had a job doing flower arrangement but became a full-time housewife when she got married. Although she usually nags Hanzawa, her cheerfulness is a balm for him.

Oikawa Mitsuhiro as Tomari Shinobu
The deputy director of the planning group at Tokyo Chuo Banking Corporation’s Loans Department. He joined the bank at the same time as Hanzawa Naoki and they are also alumni of Keio University. He makes full use of information from equities sales as well as loans to support Hanzawa from behind the scenes. There are moments when he worries about Hanzawa who faces off against their superiors and stands his ground, and wants him to come back to the bank as quickly as possible.

Kaku Kento as Moriyama Masahiro
An assistant at Tokyo Central Securities’ Corporate Planning Department. Although he is serious about work, he does not think well of the company which is dominated by the bank’s secondees and is also curt to his boss Hanzawa Naoki.

Imada Mio as Hamamura Hitomi
A young employee who belongs to Tokyo Central Securities’ Corporate Planning Department and admires Hanzawa Naoki. During the new employee training programme, she was assigned to an internal project team to put a new system in place and had experience working with Spiral, an IT company that developed a search system. She is passionate about her work.

Furuta Arata as Mikasa Yoichiro
The Vice President of Tokyo Chuo Banking Corporation. Although he is quiet, he definitely does not have a mild personality. He is an extremely ruthless man who will nonchalantly discard his subordinates. He leads the anti-Nakanowatari Ken faction. He has a strong rivalry with Owada Akira who changed sides and lies in wait for Nakanowatari’s downfall.

Ichikawa Ennosuke as Isayama Taiji
The head of Tokyo Chuo Banking Corporation’s Equities Sales Department. Owada Akira was once his target and he was called Owada’s beloved disciple by Owada and the people around him. However, Owada fell from grace in a showdown with Hanzawa Naoki. He still resents Hanzawa because of this matter. Although he is great at his job and shrewd, he will stop at nothing to get what he wants and vindictively blocks Hanzawa.

Kitaoji Kinya as Nakanowatari Ken
The President of Tokyo Chuo Banking Corporation. He values people and is still committed to harmony within a bank where factionalism still prevails. He took an interest in Hanzawa Naoki’s performance and it was because he had a high regard and faith in him that he assigned difficult deals that would determine the fortunes of the bank but … …

Kagawa Teruyuki as Owada Akira
A director of Tokyo Chuo Banking Corporation. Hanzawa Naoki previously exposed his misdeeds and it seemed that his life as a banker was over. However, he brilliantly switched loyalties to Nakanowatari Ken’s faction and remained at the bank by supporting Nakanowatari’s efforts to promote harmony internally. A shrewd man who was the youngest person to be selected for the position of managing director, he is good at making deals and winning people’s hearts. But he is hard-nosed and would mercilessly discard subordinates who oppose him.

Kataoka Ainosuke as Kurosaki Shunichi
A senior inspector with the Financial Services Agency’s Inspection Bureau. He believes banks are money lenders to begin with and treats them like the enemy. He had several run-ins with Hanzawa Naoki over cases that he was in charge of in the past and continues to bear a grudge against him to this day. A very proud and overbearing man, he will send the people whom he does not like over the edge with the tone of his voice.

Onoe Matsuya as Sena Yosuke
The CEO of Spiral. He struggled financially as he grew up and dropped the idea of going to university to work for a small software development company. After the company went bankrupt, he formed Spiral with two colleagues Kano Kazunari and Kiyota Masanobu. They developed a search system called Spiral, which led to their meteoric growth as one of the leading companies in the IT industry. He later opposes Kano and Kiyota who call for business expansion and are in the midst of parting ways when the company is targeted for acquisition by the IT company Cyber Acrobatics which has an eye on their search system. In fact, he was a former classmate and good friend of Moriyama Masahiro.

Tsuchida Hideo as Hirayama Kazumasa
The CEO of Cyber Acrobatics. As entrepreneur who resigned from a general trading company at the age of 35 and built Cyber Acrobatics from scratch together with his wife Miyuki. He approaches Tokyo Central Securities to acquire Spiral with the intention of strengthening the foundation of his company.