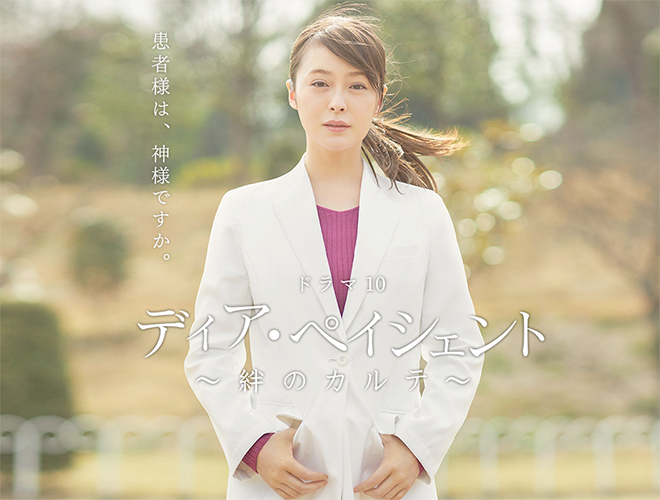 Story
Sasai Memorial Hospital is a private general hospital in the Tokyo metropolitan area. A young doctor Mano Chiaki, her trusted senior Hamaguchi Yoko and other doctors are swamped with consultations every day. One day, an elderly couple comes to the hospital, suspecting that the wife has cancer. The husband is demanding and complains to Chiaki. Although his wife is concerned about him, she does not say anything. Chiaki hands over aroma oil that her mother made, to the woman. Since the management regards a hospital as the hospitality industry and advocates that “patients are priority”, the doctors have all sorts of problems. Chiaki gets stalked by an unreasonably demanding patient Zama Atsushi who suddenly appears one day and persistently harasses her. Yoko, has a cheerful personality and is liked by patients but worries about a huge medical lawsuit. Another fellow doctor Kaneda Naoki seemed to be doing well by keeping a certain distance from patients but still gets embroiled in a dispute. Will these doctors be able to find hope?

Characters
Kanjiya Shihori as Mano Chiaki
A physician who works at Sasai Memorial Hospital, a mid-sized private general hospital. She moved here six months ago after resigning from a university hospital. Wanting to go back to being a simple doctor who examines and treats patients, she chose Sasai Memorial Hospital which has a reputation of caring for its patients. However, this is slightly different in reality. She finds herself at the mercy of the hospital’s philosophy of putting patients first and competition for patients and is in a dilemma about 3 minute medical consultations. She barely has time to sleep every day with outpatient, ward and night shift duties. To top it all, she is plagued by the most unreasonably demanding patient Zama Atsushi. She is skilled at getting a sense of patients through auscultation and palpation, and she has excellent intuition as a doctor.

Uchida Yuki as Hamaguchi Yoko
Mano Chiaki’s senior and a physician. She has been working at Sasai Memorial Hospital for four years. She is always cheerful and frank. As Chiaki tends to get twisted around by patients, she gives her sound advice and also stands up for her. She has many admirers among the hospital staff and patients. Her husband was a fellow student at medical school and now works as a researcher at their alma mater’s department of cellular immunology. He is currently in America for overseas training. Five years ago, a patient that she was treating died due to a medical error caused at the Aomori hospital where she used to work before she came to Sasai Memorial Hospital, and she was sued by the family.

Tanaka Tetsushi as Zama Atsushi
An unreasonably demanding patient who suddenly shows up in front of Mano Chiaki one day. His demands escalate from his initial request for her to prescribe medicine again because his has run out. He harasses her and she plunges into the depths of fear. He is a creepy person who somehow knows Chiaki’s personal information. Furthermore, he takes things from her desk, infiltrates the hospital while she is on night shift and even strikes her – actions that are criminal in nature. He quit his job to take care of his mother who has been bedridden after suffering from a stroke. He himself is being treated for diabetes, back problems and angina.

Asaka Kodai as Kaneda Naoki
Mano Chiaki’s colleague and a physician. He has been working at Sasai Memorial Hospital since he finished his internship and is Chiaki’s senior in the hospital. He nonchalantly opposes the hospital’s philosophy of putting patients first, questioning whether complainers are considered patients. He says offensive things, speaks his mind and fearlessly disagrees with the hospital’s policy. Although he is skilled as a doctor, he is resented by many patients because of his bad mouth. In fact, there are currently three lawsuits against him. He has masculine charm and female patients have even taken a fancy to him. This eventually develops into an unexpected incident.

Takanashi Rin as Mano Mari
Mano Chiaki’s younger sister. She helps out in reception work at their father’s clinic in Yamanashi Prefecture. She lives with their parents and has been taking care of their mother Yuko who suffers from dementia. She is a little jealous of Chiaki who fulfilled her dream to become a doctor after leaving for Tokyo. As their mother’s condition worsens and she is admitted to a nursing home, she presses Chiaki to come home and take over the clinic since their father is thinking of retiring. The sisters were originally on good terms. She is proud of Chiaki and wants to respect her feelings. However, she swamped with work at the clinic and taking care of their mother back in their hometown and feels that he own life is meaningless. Comparing herself to her sister is depressing too.

Ishiguro Ken as Sasai Soichiro
The director of Sasai Memorial Hospital. His grandfather and father were also doctors at this hospital and he is the third-generation hospital director. He is well-known as an expert in neurosurgery even at academic conferences and has certain convictions as a doctor. He respects his father very much and honours his policies. As a result, he leaves the management of the hospital to Takamine Shuji who has been running the administrative office since his father’s time while he focuses on medicine. Because of that, even though he has misgivings about Takamine’s way of doing things, he cannot oppose him.

Ibu Masato as Mano Toru
Mano Chiaki’s father. He was on the career track at a university hospital in Tokyo. However, he grew weary of constantly writing theses about incurable illnesses. Around that time, Yamanashi Prefecture was in need of doctors who would open clinics. He moved over to open Mano Clinic. As his wife Yuko’s dementia gets progressively worse, he considers closing the clinic to spend time with her. He has no intention of forcing Chiaki to take over his clinic. She respects him as a doctor and he has also been supporting her growth as a doctor. Using the mountains and nature as a analogy, he tells her what matters most as a doctor such as the relationship between patient and doctor as well as a person’s life and death.

Theme Song
PS I Love You by Miyamoto Hiroji

This blog contains information and musings on current and upcoming Japanese dramas but is not intended to be comprehensive.
View all posts by jadefrost →
This entry was posted in NHK, Spring 2020 Dramas and tagged Dear Patient, Hamano Kenta, Ibu Masato, Ishiguro Ken, Kanjiya Shihori, Uchida Yuki. Bookmark the permalink.