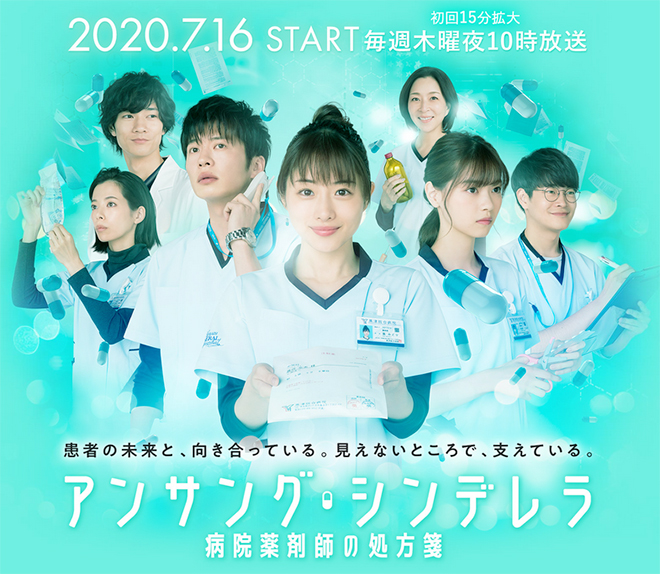 Story
Aoi Midori is a pharmacist at Yorozu General Hospital’s pharmacy department. Together with Hagura Ryunosuke and Kudo Nijiko, she checks each prescription under the directions of Kariya Naoko, a senior pharmacist, and speedily handles the huge task of preparing, auditing and dispensing medicine. One day, a newcomer called Aihara Kurumi joins the pharmacy department which has been suffering from a manpower shortage. Midori is supporting Seno Shogo, the deputy head of the pharmacy department, in dispensing medicine for a patient who was brought to the emergency unit for a bee sting when their boss Handa Satoko brings Kurumi over. Midori is assigned to instruct Kurumi and while she takes her around the hospital, a patient suffering from cardiac arrest arrives at the emergency centre. Kurumi sees how a pharmacist works with the doctor and nurses for emergency treatment. In the middle of performing a heart massage, Midori discovers the medicine that the patient takes daily and informs the doctor. The patient’s heartbeat recovers. Kurumi is touched that a pharmacist saved the patient. However, the patient’s family only thanks the doctor. Midori tells Kurumi that she is not cut out to be a pharmacist if she is looking for gratitude. As medication will affect the rest of a patient’s life, Midori believes it is essential to learn about the patient. She sincerely engages with every patient in the hope of helping them regain the everyday life that they had taken for granted.

Characters
Ishihara Satomi as Aoi Midori
A pharmacist at Yorozu General Hospital’s pharmacy department. She has been a pharmacist for eight years. She believes it is essential to learn about a patient because medication will affect the rest of the patient’s life, and considers this the first rule for a pharmacist. Although she wants to save as many patients as possible, she tends to get too involved and spend extra time on them. As a result, she gets told off by other pharmacists who want her to be more efficient in her work. However, she is doing all of this to help patients to return to their “normal lives” and she sincerely supports each of them.

Nishino Nanase as Aihara Kurumi
A rookie pharmacist at Yorozu General Hospital’s pharmacy department. She chose to become a pharmacist for a rather negative reason. While it seemed impossible for her to be a doctor, she could become a pharmacist and would not have the level of responsibility of a doctor. But her attitude toward work begins to change as she watches Aoi Midori up close.

Narita Ryo as Onozuka Ryo
A mysterious young man who shows an interest in the fact that Aoi Midori is a hospital pharmacist for some reason, and frequently shows up in front of Midori. How will he get involved with her and the other pharmacists?

Sakurai Yuki as Kariya Naoko
A senior pharmacist at Yorozu General Hospital’s pharmacy department. She is a professional among professional for dispensing medicine. She is the type who puts emphasis on work efficiency and coolly does her work without unnecessary talk. Her working style is the complete opposite of Aoi Midori who gets too involved and spends too much time with patients. Although she frequently scolds Midori for being slow in her work, she shares the same deep desire to save patients.

Maya Miki as Handa Satoko
The head of Yorozu General Hospital’s pharmacy department. She cares about her subordinates and gives Aihara Kurumi, the rookie, her full attention. Even though she is the model boss who epitomises a modern era conscious of harassment, she is also somewhat calculating.

Tanaka Kei as Seno Shogo
Handa Satoko’s deputy in Yorozu General Hospital’s pharmacy department. He always seems gruff and unfriendly. However, he is actually kind-hearted and cares about patients more than anyone else. He is often cold towards Aoi Midori but he acknowledges her sincerity towards patients.

Theme Song
Yes And No by Dreams Come True

This blog contains information and musings on current and upcoming Japanese dramas but is not intended to be comprehensive.
View all posts by jadefrost →
This entry was posted in Fuji TV, Spring 2020 Dramas and tagged Ishihara Satomi, Tanaka Kei, Unsung Cinderella. Bookmark the permalink.