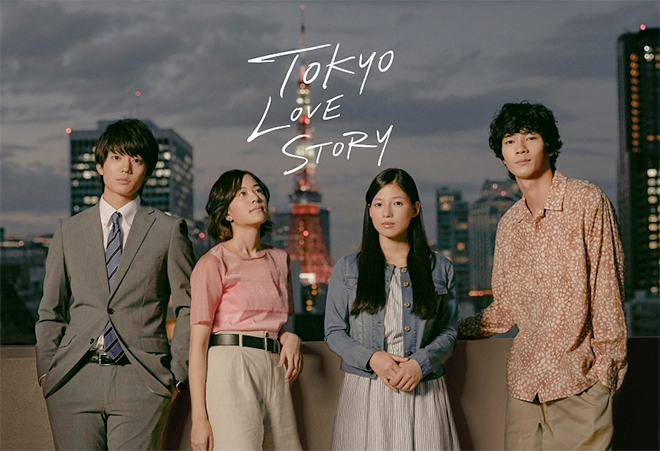 Broadcast
From 29 April 2020 (updated on Wednesdays)

Story
Nagao Kanji works for an advertising agency in his hometown of Ehime Prefecture. He is assigned to the sales department of its Tokyo headquarters. He is introduced by the department manager Waga Natsuki to a colleague Akana Rika who is assigned to help him with his work. Kanji is immediately invited to drinks by Mikami Kenichi, a former high school classmate from his hometown who is now in Tokyo. Sekiguchi Satomi whom Kanji has always had feelings for also comes, and he yearns for this reunion. However, Rika calls him about delivering his wallet which he had left in office. She ends up joining them when she comes over. On the way back, Rika tells Kanji out of the blue, “Shall we kiss?” and he is rattled. She offers to buy him lunch in exchange. However, there have been rumours in office that Rika is in a relationship with their boss Waga. That night results in the three ex-classmates to start interacting again while the gentle but indecisive Kanji’s relationship with Rika gradually evolves from mere workplace colleagues to something more … …

Characters
Ito Kentaro as Nagao Kanji
He comes from Ehime Prefecture and works for an advertising agency. He is transferred to the agency’s Tokyo headquarters and comes up to Tokyo. He has had an unrequited crush on his ex-classmate Sekiguchi Satomi since high school days. When he meets her again in Tokyo, he is secretly excited.

Ishibashi Shizuka as Akana Rika
Born in Shibuya in Tokyo, she has gone straight on from kindergarten to a private university without having to take an entrance exam. A naive young lady who behaves with abandon and lives according to her feelings. At first, she gets involved with Nagao Kanji out of curiosity and then proactively goes after him.

Kiyohara Sho as Mikami Kenichi
Nagao Kanji’s childhood friend. He comes from Ehime Prefecture and is a medical student attending medical college in Tokyo. He is flashy and the type who gets women’s attention because he has a way with them. Although he seems like he is successful in life, he has all sorts of internal conflicts.

Ishii Anna as Sekiguchi Satomi
Nagao Kanji and Mikami Kenichi’s high school classmate. She comes from Ehime Prefecture and is working at a nursery school in Tokyo. A serious, sincere, sensible and conservative A student. Although she will not admit it herself, she has secretly liked Mikami Kenichi since high school days.

This blog contains information and musings on current and upcoming Japanese dramas but is not intended to be comprehensive.
View all posts by jadefrost →
This entry was posted in Amazon Prime, Drama Digest, Fuji TV, Spring 2020 Dramas and tagged Kiyohara Sho, Tokyo Love Story (2020). Bookmark the permalink.