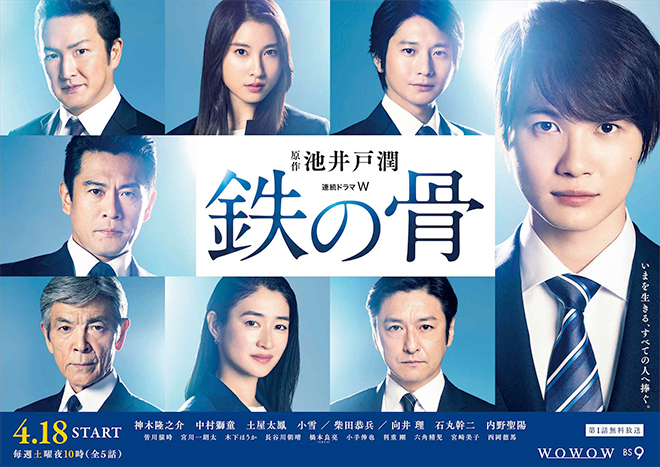 Story
Tomishima Heita is a young employee who has been with a mid-sized construction company for four years, and loves construction site. One day, Heita is suddenly ordered to transfer to the General Affairs Department which is a different line of work. It is a unit in charge of winning large public works contracts and mocked as the Bid-Rigging Department. Together with a weary-looking department manager Kanematsu Iwao, senior colleagues Nishida Goro and Shibata Risa, and a shrewd but inscrutable managing director Ogata Soji, Heita aims to secure a public works contract worth 200 million yen. Is bid-rigging a necessary evil? As his interactions with a fixer deepens, he sees desire and obligatory ties with his own eyes. Even though Heita struggles between his ideals and reality, he finds his work, which controls the company’s fate, rewarding. Meanwhile, their company is in the lead with a bold technical innovation in its bid. However, the experienced management of a rival company stands in their way. To make matters worse, the Special Investigation Department of the Tokyo District Public Prosecutors Office starts to look into collusive bidding involving influential politicians and the investigation even extends to Heita. What will happen to him and the company?

Characters
Kamiki Ryunosuke as Tomishima Heita
A young employee who has been with Ikematsu-gumi, a mid-sized construction company for four years. He is awkward but works conscientiously at construction sites. Then one day, he is transferred to the General Affairs Department. He has been dating his girlfriend Nomura Moe since university but their relationship starts to get strained after his transfer to the General Affairs Department.

Nakamura Shido as Nishida Goro
The deputy manager of Ikematsu-gumi’s General Affairs Department. He has been in the same department for a long time and has vast experience in contracts. He is a dependable senior and like Tomishima Heita’s mentor. He joined the company at the same time as Shibata Risa.

Tsuchiya Tao as Nomura Moe
Tomishima Heita’s girlfriend. She works at the sales division of Hakusui Bank’s Shinjuku branch as a teller. She worries about Heita will become complicit in bid-rigging. She consults her boss Sonoda Shunichi about her relationship with Heita but … …

Koyuki as Shibata Risa
The only woman in Ikematsu-gumi’s General Affairs Department. She is well-informed because she has been in the same department for a long time and eases the friction with superiors. She joined the company at the same time as Nishida Goro.

Shibata Kyohei as Mitsuhashi Manzo
A fixer who operates behind the scenes in bid-rigging in the construction industry, and the consultant to the construction company Yamadate-gumi. He is the younger brother-in-law of the influential politician Shiroyama Kazuhiko who supports highway construction interests. He grows close to Tomishima Heita whom he met through Ogata Soji because they are from the same hometown.

Mukai Osamu as Sonoda Shunichi
The deputy manager of the loans division at Hakusui Bank’s Shinjuku branch. He has a promising future. He becomes the confidant of his subordinate Nomura Moe.

Uchino Masaaki as Ogata Soji
The managing director of Ikematsu-gumi. He was headhunted by Ikematsu-gumi’s previous CEO to join the company when he was a member of the board at a major construction company. He is a formidable man who supports the company and it is said “Ikematsu-gumi has Ogata”. He is the one who brought Tomishima Heita over to the General Affairs Department.

This blog contains information and musings on current and upcoming Japanese dramas but is not intended to be comprehensive.
View all posts by jadefrost →
This entry was posted in Spring 2020 Dramas, WOWOW and tagged Kamiki Ryunosuke, Koyuki, Mukai Osamu, Nakamura Shido, Shibata Kyohei, Tetsu no Hone, Tsuchiya Tao, Uchino Masaaki. Bookmark the permalink.