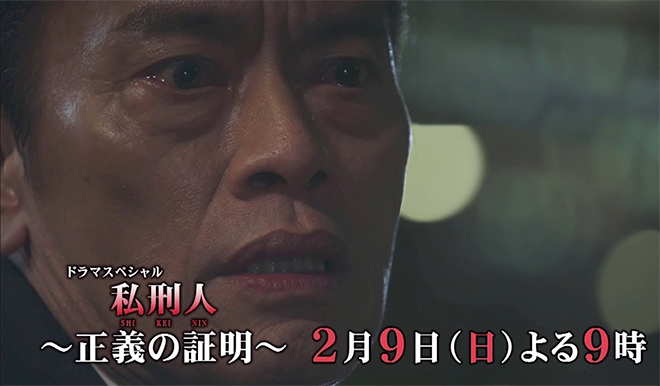 Date: From 9.00 p.m., 9 February 2020
Scriptwriter: Hisamatsu Shinichi (Final Life, Kinpika, Temisu no Kyuukei)
Original Work: Seigi no Shoumei by Morimura Seiichi
Cast: Endo Kenichi, Kitamura Yukiya, Uchiyama Rina, Hamatsu Takayuki, Sakai Miki, Asano Kazuyuki, Takenaka Naoto
Synopsis: The appearance of a vigilante who takes the law into his own hands causes an uproar among the people. Fearful of being “sentenced” by this person who uses a tranquiliser gun to shoot at targets, a steady stream of people pour out the truth and apologise. Tatsuoka Yasukuni (Takenaka Naoto), the Minister of Health, Labour and Welfare, becomes the next target. Right after a party, someone points a gun at Tatsuoka. However, Matsunaga Yuichi (Endo Kenichi) from the Tokyo Metropolitan Police Department’s shields him in the nick of time and he gets away unscathed. From that day on, the vigilante vanishes all of a sudden. Three years later, Matsunaga is working as a uniformed police officer at a police box while he takes care of his younger sister Kotono (Sakai Miki), who is being treated for aplastic anaemia, and her daughter Shizuku (Takenoya Saki). Meanwhile, a university student (Yokoyama Ryo) has been arrested for sexually assaulting someone who was intoxicated, but his case is later dismissed. He is shot with a tranquiliser gun by someone. Yoshio Emi (Uchiyama Rina), a reporter for a weekly magazine who had witnessed the scene, is surprised that the missing vigilante has resumed activities. A series of press conferences are given and the reappearance of the vigilante creates turmoil yet again. The vigilante’s target is the university student’s uncle Konaka Shigeyoshi (Ida Kunihiko), a Democratic Liberal Party lawmaker. Konaka is an influential figure who belongs to the faction of Tatsuoka – the very man who was targeted three years ago. With the reputation of police on the line, an office is created within the Tokyo Metropolitan Police Department to do whatever it takes to arrest the vigilante. Soma Akihiro (Asano Kazuyuki) who has become the head of the summons Matsunaga and an investigation is launched to identify this vigilante. Tatsuoka is expected to be the next Prime Minister now. However, the shooting incident by the vigilante three years ago has been covered up by the police. As a result, Ezaki Teppei (Kitamura Yukiya), who was Matsunaga’s partner at the time, lost faith in the police organisation and left to make a fresh start as a taxi driver. Matsunaga is once again assigned to be Tatsuoka’s security police. Emi questions why he would risk his life one more time for scum that is driven by self-interest after hiding the truth even though he sustained critical injuries back then. In fact, Emi’s article about the bullet that Matsunaga took was suppressed by the prime minister’s official residence. She is not sure how she feels about the vigilante. However, when Tatsuoka’s secretary Yamaha Fumio (Hamatsu Takayuki) sacrifices himself for Tatsuoka and is gunned down, public opinion turns against the vigilante. The First Investigation Division soon arrests someone. But Matsunaga and some others are unconvinced and as the continue their investigation, unexpected facts come to light.
Website: www.tv-asahi.co.jp/seiginoshoumei

This blog contains information and musings on current and upcoming Japanese dramas but is not intended to be comprehensive.
View all posts by jadefrost →
This entry was posted in TV Asahi, Winter 2020 Drama Specials and tagged Endo Kenichi, Kitamura Yukiya, Shikeinin, Uchiyama Rina. Bookmark the permalink.