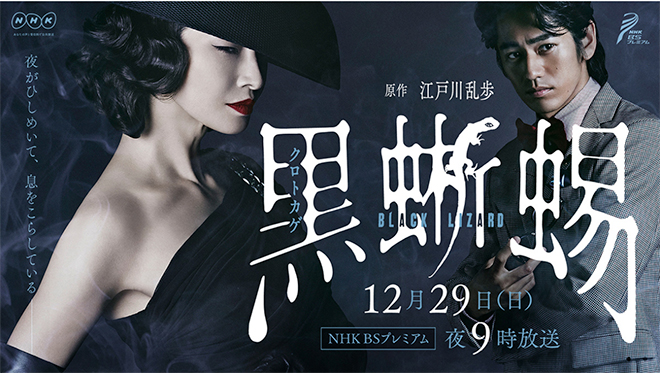 Date: From 9.00 p.m., 29 December 2019
Scriptwriter: Nagatsu Haruko
Original Work: Kurotokage by Edogawa Ranpo
Cast: Ryo, Nagayama Kento, Fukumoto Riko, Sakuma Yui, Yoshimura Masato, Kazama Toru, Sano Shiro, Nakamura Baijaku
Synopsis: Set in the not too distant future where it is commonplace for high tech crimes to get through cyber defences, Iwase Shobei (Nakamura Baijaku), a man of great wealth who is also a well-known collector of gems, asks private investigator Akechi Kogoro (Nagayama Kento) to provide personal protection for his daughter Sanae (Fukumoto Riko). Iwase has been warned that she will be kidnapped. The mysterious phantom thief Kurotokage, who has a reputation for deftly replacing precious gems with imitations, stands in Akechi’s way. However, Kogoro catches on that Madam Midorikawa (Ryo), the owner of an exclusive hotel who has come forward to give shelter to Sanae, is actually Kurotokage, and prevents Sanae’s abduction. However, he is hampered by a trick laid in the entire hotel and fails to catch her. However, at that moment, the thief and famous investigator secretly fall in love. Akechi chases Kurotokage and eventually learns about her tragic past and surprising identity. Although they are swayed by forbidden love, the two of them have a final showdown at Kurotokage’s secret museum which houses her collection. Who will be the victor?
Official Website: www4.nhk.or.jp/P6023

This blog contains information and musings on current and upcoming Japanese dramas but is not intended to be comprehensive.
View all posts by jadefrost →
This entry was posted in Fall 2019 Drama Specials, NHK and tagged Kurotokage, Nagayama Kento, Ryo. Bookmark the permalink.