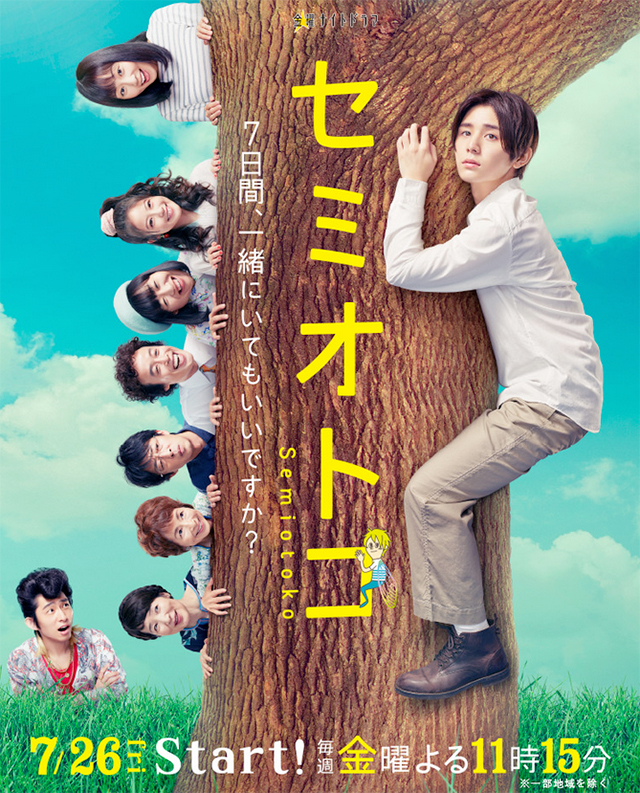 Story
Semi, the cicada, is waiting for the moment to break out of his shell in the garden grounds connected to Utsusemiso, an apartment building in the outskirts of Tokyo. He spent several years in the soil and is impatient for the moment when he can finally come up to the ground to live his last seven days. He wants to take a look the residents of Utsusemiso whom he has been preoccupied with the whole time he was underground. He has only been able to hear their voices and wants to know what kind of people they are. The moment for him to emerge eventually arrives. When Semi finally crawls out onto the surface, he sees a woman about to fall on him. He resigns himself to die without ever flying about after emerging above ground. But the woman skillfully avoided him and landed on the ground a slight distance away. Semi has a narrow escape from death. This woman is Okawa Yuka, a resident of Utsusemiso. Yuka works for a food company and has never had a day when good things happen to her. Semi is touched that she saved his life but senses her loneliness. Out of a burning desire to make her smile, he transforms into a human and appears before her. Semi proposes to be with Yuka for seven days and do anything to repay her for saving his life. This is the beginning of their limited time together, but … …

Characters
Yamada Ryosuke as Semi
He emerged as a cicada this summer but turned into a human. As he was about to break out of his shell, a woman fell from above and he was trapped under her and thought he was finished. However, was saved from death by Yuka’s quick wits. Concerned about the kind but seemingly lonely Yuka, he thinks of doing something for her to thank her for saving his life and wants to make her smile. And so he transforms into a (very beautiful) human and comes to live with Yuka at Utsusemiso for a mere seven days at the risk of his own life. The entire world above is dazzling and he adores it. That is why his favourite phrase is, “What a wonderful world! He loves maple syrup. Since he is a cicada, he knows little of the norms of the human world and his speech and behaviour are frequently out of this world.

Kinami Haruka as Okawa Yuka
A resident of Utsusemiso. She works at a food factory. Because she is hopeless at communicating well with people and proactively mixing with people, her own voice is hardly heard. She has had rotten luck in her life so far … … She comes from the countryside and her parents are hardcore delinquents. Her irresponsible older brother Kenta is also a legendary delinquent in her hometown. One day, she reported Kenta’s crime to the police and felt disapproval from her family and people around her. As a result, she found it difficult to stay on and came to Tokyo. She is profusely thanked for saving Sami’s life and they end up spending just seven days together without her knowing why.

Imada Mio as Kumada Minako
A resident of Utsusemiso. She came to Tokyo from Fukuoka with the dream of becoming a designer. She attends a fashion college and often gets Okawa Yuka to help with sewing that has to be submitted. She gives samples of her own designs to Yuka and the residents of Utsusemiso but they are hardly worn. She is the type of girl these days who speak their mind. She hates huge cicadas.

Miyake Ken as Okawa Kenta
Okawa Yuka’s older brother. He is a well-known legendary delinquent in their hometown. But what this really means is that he is foolish enough to become a legend … … He unknowingly committed theft because he was too idiotic. This was reported to the police by his younger sister Yuka of all things and he was arrested. However, he is somehow impossible to hate.

Kitamura Yukiya as Ogawa Kunio
A resident of Utsusemiso. His occupation is unknown and he often stays in his room. He keeps repeating “weak constitution” and “short life” but it is already many years later. Anyway, he is a man of many mysteries. He will often shout something strangely musical in the middle of the night.

Sagawa Sawako as Shono Nejiko
One of the two landladies of Utsusemiso. The younger of two sisters nicknamed the “Kokubunji sisters”, she is somewhat detached from the real world. In contrast to her impatient older sister Kugiko, she is very calm and does things at her own pace. At times, she fires sharp words.

Dan Fumi as Shono Kugiko
One of the two landladies of Utsusemiso. The older of two sisters nicknamed the “Kokubunji sisters”. Because she is a very impatient person, she always complains about her younger sister Nejiko who does things at her own pace. Even though they constantly argue, they are actually close sisters.

This blog contains information and musings on current and upcoming Japanese dramas but is not intended to be comprehensive.
View all posts by jadefrost →
This entry was posted in Summer 2019 Dramas, TV Asahi and tagged Kinami Haruka, Okada Yoshikazu, Semi Otoko, Yamada Ryosuke. Bookmark the permalink.