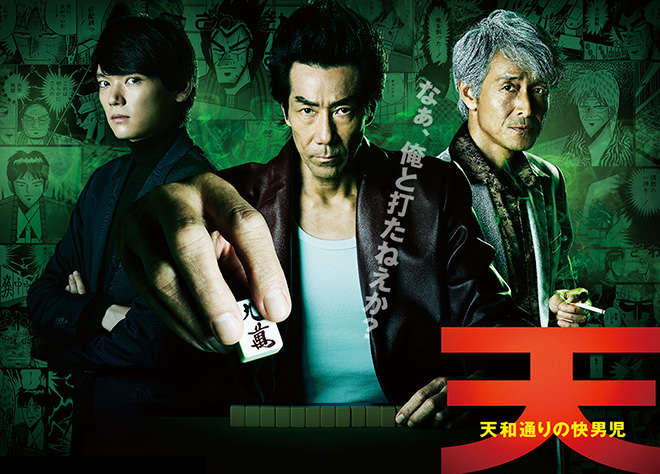 Story
Igawa Hiroyuki is well-versed in mahjong and makes a killing from novice opponents at a mahjong parlour. One day, he meets Ten Takashi who runs a mahjong contracting business. In other words, a pinch hitter. Ten is unrivalled in his ability to win and his strong will. He is asked by the regulars to be a substitute and proposes a half-game consisting of an east and south round to Hiroyuki. Although Hiroyuki loses, he admires Ten and gets immersed in the underworld of mahjong. The two of them soon encounter Akagi Shigeru, the legendary mahjong player, Harada Katsumi, currently one of Kansai’s strongest mahjong players, and Soga Mitsui as they battle it out to determine who is the top of Japan’s mahjong underworld.

Characters
Kishitani Goro as Ten Takashi
A gambler who runs a mahjong contracting business. Unrivalled in his ability to win and his strong willpower, he is a loyal and compassionate man. He battles it out with Akagi Shigeru, Harada Katsumi, to determine who is the top of Japan’s mahjong underworld.

Denden as Soga Mitsui
An extraordinary mahjong player from the Kansai region, he had been at the top of the mahjong underworld almost 10 years before Akagi Shigeru hit the scene.

Furukawa Yuki as Igawa Hiroyuki
At first, he plays against novices and earns extra spending money at the mahjong parlour. However, he meets Ten Takashi and learns about the world of pinch hitters who play for keeps, and he transforms into the mahjong player who seeks stronger opponents. He likes mahjong for its logic.

Matoba Koji as Harada Katsumi
Currently Kansai’s strongest mahjong players, he is the head of one of the region’s greatest organised crime groups. He plays a game consisting of an east and west round with Ten Takashi to decide the best player of the country’s mahjong underworld.

Yoshida Eisaku as Akagi Shigeru
A talented mahjong player who has never lost a match. He is feared as the devil because of his cool-headed mahjong play where he simultaneously attacks and defends at the same time. He is called a man in the realm of gods and a talent who comes once every 100 years, and there are countless legends about him.

This blog contains information and musings on current and upcoming Japanese dramas but is not intended to be comprehensive.
View all posts by jadefrost →
This entry was posted in Fall 2018 Dramas, TV Tokyo and tagged Furukawa Yuki, Kishitani Goro, Ten Series. Bookmark the permalink.