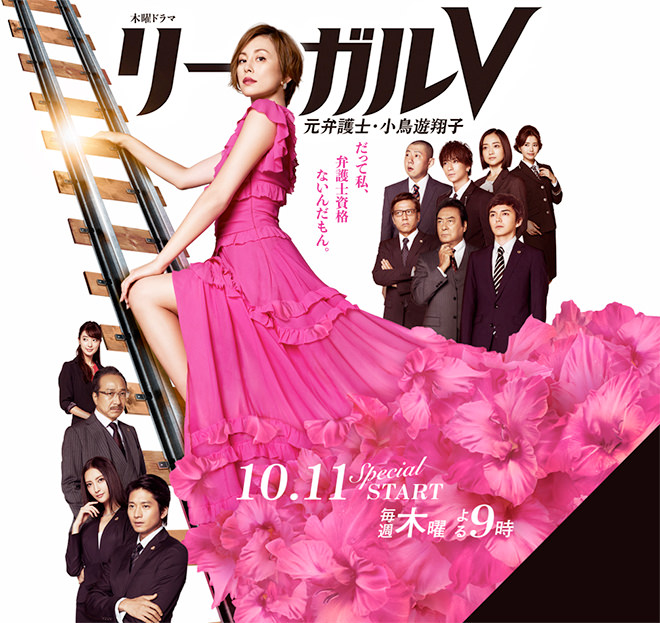 Story
A mother was driven to suicide because she lost her case and a young lawyer Aoshima Keita stands on a sheer cliff with an expression of despair. A woman dressed in mourning appears all of a sudden. “You cannot die until you’ve fought and won,” she says. This woman is Takanashi Shoko who has come to recruit Aoshima. She talks passionately about fighting together at a law firm to help the weak, and leaves word that he should come the next morning. Meanwhile, university professor Kyogoku Masahiko who is a lawyer on paper, has reached his day of retirement. In fact, he has been invited by Shoko to start a law firm together and is about to embark on a new chapter in his life. However, he has trouble contacting Shoko. It turns out that not only has Shoko had her lawyer’s licence revoked, she has also been fired by leading law firm, Felix & Temma. Otaka Takashi, a former public prosecutor turned lawyer, hears about this from Kyogoku who was his university professor. Suspecting fraud, he conducts an exhaustive search for Shoko. However, when he finally visits the address he has traced, the name Kyogoku is inscribed on the nameplate and signboard. Otaka is wary of Shoko who is awfully ingratiating but Kyogoku is in very high spirits to be welcomed as the representative lawyer. At this moment, Aoshima is headed for the address that Shoko had specified. He comes across a commotion over molest at a train platform. Yasuda Tsutomu, an employee of a top company, has been accused by a young woman Mishima Mao of touching her buttocks. He vehemently maintains his innocence. Aoshima cannot turn a blind eye to this matter and takes Yasuda’s case but … … Yasuda is subsequently sent to the prosecutors. However, the molest case is overwhelmingly in the victim’s favour. Even Shoko who has been supposedly been praised for helping the weak cuts off Aoshima, telling him that this case pays little and is trash that a struggling lawyer takes on. However, the look in her eyes changes at a word that Yasuda casually said … …

Characters
Yonekura Ryoko as Takanashi Shoko
The manager of Kyogoku. A former lawyer who makes sport of the people around her with her carefree behaviour. She belonged to the leading law firm Felix & Temma in the past but her lawyer’s licence was revoked for some reason. There are also dark rumours that she seemed to be hanging out with a criminal syndicate and blackmailing, but the truth is shrouded in mystery. She persuades Kyogoku Masahiko who is a lawyer on paper to open a law firm and she shrewdly becomes its manager. Although the office’s philosophy is “Everyone under the law is free”, she is a free spirit who has deprived everyone of their freedom. She works the lawyers and paralegals hard while she does nothing on the grounds that she is not a qualified lawyer. On the other hand, she will not forgive people who use the law to cheat and people who try to take advantage of the law. She has the ability to distinguish clients who are genuinely in need.

Mukai Osamu as Kaizaki Hayato
An ace lawyer who works for Felix & Temma. Takanashi Shoko’s ex-colleague and rumoured boyfriend. He is a very proud and ambitious man. His family is wealthy and he has been good in both his studies and sports from a young age. He has an arrogant personality with absolute confidence in his strategy in court. His mentality is that he must win at all cost and he will even use illegal means to win sometimes. He is willing to do dirty work to live up to the expectations of Tenma Soichiro, the head of Felix & Temma.

Hayashi Kento as Aoshima Keita
A lawyer who works for Kyogoku. He tried to get a job at Felix & Temma, the country’s largest law firm, but he failed the interview because he suffers from extreme stage fright. He has been working at a mid-sized law firm as a lawyer. One day, he is recruited by Takanashi Shoko who shows up all of a sudden, and decides to work at Kyogoku. He is serious and competent. However, he cannot act convincingly because he is too serious. He continuously loses cases as he keeps losing in court and in negotiation tactics which are his weak points. He questions his suitability to be a lawyer and has a tendency to slide into self-loathing.

Nanao as Shiratori Minako
An associate lawyer in her second year at Felix & Temma. She works under Kaizaki Hayato. Although she is gentle in demeanour, under that is an ambitious woman. She steals Kaizaki’s techniques and looks for a promotion to partner. She makes use of everything and schemes to get to the top. She has the ability to deal with Tenma Soichiro. She feels a sense of rivalry with Takanashi Shoko both as a lawyer and a woman, and also loathes her.

Adachi Yumi as Ito Rie
A paralegal who works for Kyogoku. She is a former bank employee who worked at a major bank for 13 years. However, she embezzled 100 million yen for the man she loved. She received a prison sentence and served three years. Her soft-heartedness is her only flaw. She is thorough and quick in her work. She holds all the necessary qualifications for a bank employee including bookkeeping, securities brokering and life insurance. Because she is penny-pinching and good at managing money, she is put in charge of Kyogoku’s safe

Miura Shohei as Kayano Akira
A paralegal who works for Kyogoku and is currently a host. He is good looking and a good young man but a little silly. He is popular with men and women of all ages because he is a natural at endearing himself to people. He meets Takanashi Shoko at a host club and they somehow hit it off. He adores Shoko as an elder sister. He is unexpectedly good at investigations such as getting information by interviewing people due to his friendliness but he does not listen to difficult things.

Katsumura Masanobu as Otaka Takashi
A a former public prosecutor turned lawyer with a condescending attitude. He was a former elite prosecutor who was even assigned to the Special Investigation Department. He faced off Takanashi Shoko in court when she was still a lawyer and was trounced. He became a lawyer for a reason but he has no clients because he is very proud so he is basically free. He thinks that his university professor Kyogoku Masahiko has been tricked by Shoko and spends a lot of time at Kyogoku in order to keep an eye on her.

Kohinata Fumiyo as Tenma Soichiro
The head of Felix & Temma. He is also the president of the bar association and a powerful man in Japan’s legal circles. Takanashi Shoko’s ex-boss. He is known as a lawyer who advocates human rights but he will do everything he can in order to win. He is ruthless man who will not forgive a person who has gone against him. He used to consider Shoko who was an outstanding subordinate, as his right-hand, but now he shuns her.

Takahashi Hideki as Kyogoku Masahiko
The head of Kyogoku. After he graduated from the law faculty, he stayed on at the university and became a law expert as a professor. Although he has has been admitted to the bar, he has no practical experience and is just a lawyer on paper. In fact, he has had a go at all sorts of certification exams and holds many qualifications. Takanashi Shoko talks him into putting 5 million yen for the office opening and entrusting the officially registered seal to her. He aspires to make his debut in court.

This blog contains information and musings on current and upcoming Japanese dramas but is not intended to be comprehensive.
View all posts by jadefrost →
This entry was posted in Fall 2018 Dramas, TV Asahi and tagged Adachi Yumi, Hayashi Kento, Katsumura Masanobu, Kohinata Fumiyo, Legal V, Yonekura Ryoko. Bookmark the permalink.