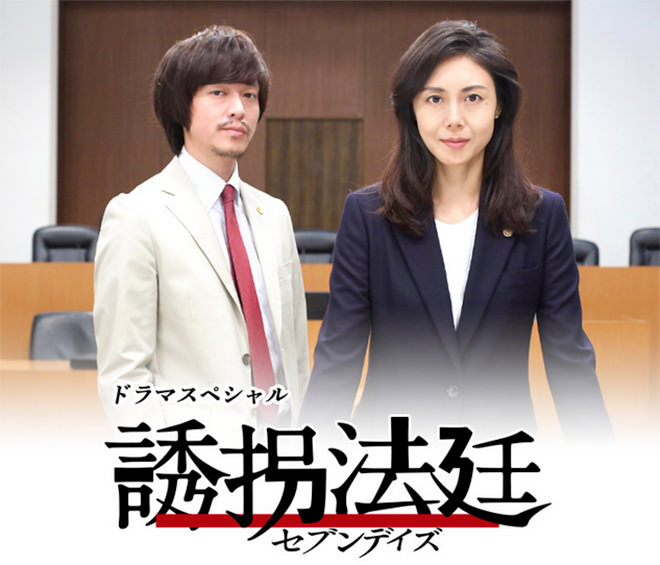 Date: From 9.00 p.m., 7 October 2018
Scriptwriter: Izumi Yoshihiro (Todome no Kiss, Aogeba Toutoshi, Death Note)
Genre: Legal
Cast: Matsushima Nanako, Maruyama Ryuhei, Sugimoto Tetta, Itoyo Marie, Emoto Tokio, Masaki Reiya, Denden, Yashima Norito, Ibu Masato, Fubuki Jun
Synopsis: Lawyer Amabuki Meiko (Matsushima Nanako) has made the decision to divorce her estranged husband Aizawa Goro (Sugimoto Tetta), who is a top police official. She promises herself that she will never let Aizawa have custody of their 9-year-old daughter Mai (Takamaru Emiri). At this point, an incident occurs that drains Meiko’s face of colour. Mai has been kidnapped by someone. In addition, the kidnapper has made an outrageous demand in exchange for her life. It is to defend Kunimitsu Eiji (Emoto Tokio), the suspect in the killing of a student artist and win a not guilty verdict. Kunimitsu has been insisting on his innocence, however he is undoubtedly guilty. Furthermore, there are only seven days left before the trial concludes. It is obviously a difficult situation no matter how outstanding Meiko is. Her maternal instincts drive her to take this on with grim determination. She immediately tries to negotiate directly with Utsui Hideki (Maruyama Ryuhei), the court-appointed lawyer in charge of Kunimitsu, with the request to replace him. However, Utsui makes an unexpected suggestion. It is to defend Kunimitsu together. There would not be enough time to switch lawyers before the trial. Utsui has a point there. He is also the person most familiar with Kunimitsu. Meiko has no choice but to take his offer. She runs around gathering evidence to acquit Kunimitsu. Utsui chides Meiko, but she carries on doing whatever it takes such as entering the crime scene without authorisation. Meanwhile, Kunimitsu’s trial finally begins. The victim’s mother Takamine Fumiko (Fubuki Jun) wants severe punishment for him. As she and other people in court watch on, Meiko asserts that the real criminal is someone else who was acquainted with the victim based on new forensic results. However, this criminal … …
Official Website: www.tv-asahi.co.jp/yuukaihoutei

This blog contains information and musings on current and upcoming Japanese dramas but is not intended to be comprehensive.
View all posts by jadefrost →
This entry was posted in Fall 2018 Drama Specials, TV Asahi and tagged Fubuki Jun, Ibu Masato, Matsushima Nanako, Yuukai Houtei. Bookmark the permalink.