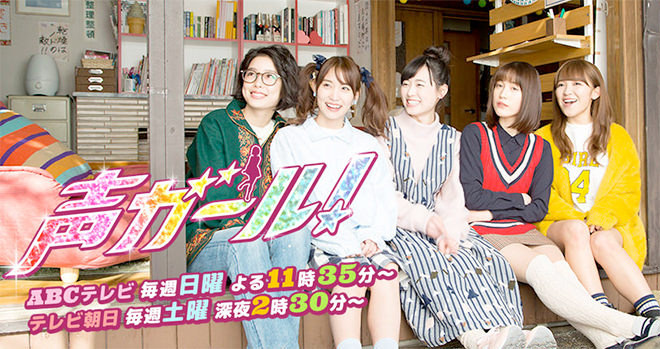 Story
Kikuchi Makoto is the only daughter of the grocer on the shopping street in front of the train station. She has gained popularity for her eloquence in explaining fruits and vegetables while standing in front of the shop. However, she does not know what she should do after graduating from high school and has been agonising over it. Makoto has no experience or knowledge of voice acting but one day, she is suddenly scouted by Oshima Yuichiro, the manager of a talent agency called Ihara Office, and plunges into the world of voice acting without really thinking about it. When she goes to the recording studio, other aspiring voice actresses Kuriyama Asami, Inaba Ren, Morimoto Konatsu and Ochiai Ryoko who were scouted by Oshima are there. They immediately take a voice test tailored to the anime series HappinessCharge Precure! but … … Makoto sets her sights on becoming a professional voice actor as she lives with her four rivals.

Characters
Fukuhara Haruka as Kikuchi Makoto
A grocery shop idol with a natural smile and a spirit of service. She is scouted by Oshima Yuichiro but has no knowledge or experience as a voice actress.

Nakamura Yurika as Kuriyama Asami
She has talent and the highest level of professionalism. She is bad at cooking.

Nagao Maria as Inaba Ren
She has loved Precure since young and that is her favourite phrase.

Amaki Jun as Morimoto Konatsu
She came up to Tokyo from Kansai to become a voice actress. She hates to lose and is the life of the party.

Tomatsu Haruka as Tomatsu Haruka
A popular voice actress whom everyone idolises and she becomes Kikuchi Makoto’s confidant.

This blog contains information and musings on current and upcoming Japanese dramas but is not intended to be comprehensive.
View all posts by jadefrost →
This entry was posted in Spring 2018 Dramas, TV Asahi and tagged Koe Girl!. Bookmark the permalink.