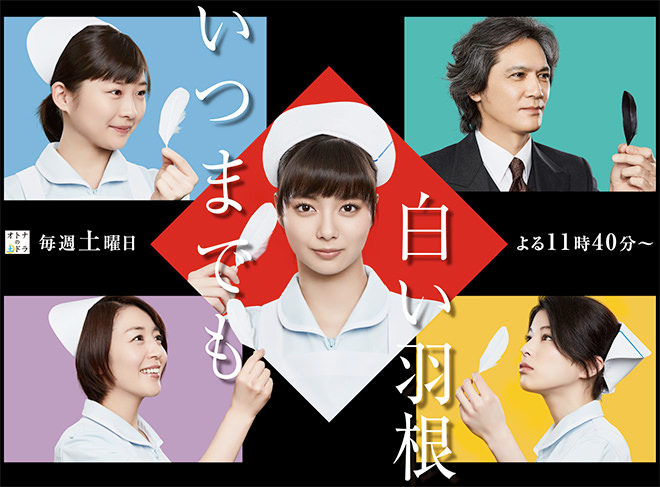 Story
Kizaki Rumi looks up at the statue of Florence Nightingale next to the entrance of a nursing school in Tokyo. She turns her back on it and is about to leave but gives up on the idea and enters the school building. Rumi did not really want to become a nurse in the first place. She failed the university entrance exam and has no choice but to attend nursing school which was her backup in case she failed to get into university. Her classmates are of different ages and come from different backgrounds. They include the outgoing Yamada Chinatsu; housewife Saeki Noriko; and law faculty graduate Tono Fujika. There are a lot of practical sessions such as bed bath, washing hair, making beds … … Despite her awkwardness, Chinatsu has the strongest desire to be a nurse. Rumi has to stay behind every day to practice with her. One day, a reluctant Rumi is dragged to a matchmaking party by Chinatsu. She ends up spoiling the mood by bluntly complaining about a female university student’s repeatedly sarcastic remarks. Chinatsu’s childhood friend, Hino Shunya, stares at Rumi in stunned silence. After they leave the party, Chinatsu happily says, “I feel that I can become a little stronger with someone strong beside me.” Rumi somehow senses Chinatsu’s feelings for Shunya. When Rumi gets home, her mother who has come back from her part-time job, and her father who has been shutting himself away in the room after losing his job, are in. One day, Rumi and the rest have to observe and practice in a lung cancer surgery. They are overwhelmed by their first time seeing an actual operation. At that moment, Fujika, who is always outstanding and seems unfazed, collapses. When Rumi leads her outside, a houseman Hishikawa Takumi who happened to pass by, lends a hand. This encounter would later have a big significance to Rumi. Rumi goes through training with the intention of eventually sitting for the university exam again. However, as she meets colleagues of different generations and faces first love and dying patients, she becomes aware of a new self and eventually aspires to be a nurse. Rumi constantly speaks up about what she thinks is right. At times, this creates a gulf between the people around her. However, she grows bit by bit as she sincerely engages her colleagues with courage and conviction. Will the day come when she can spread her wings?

Characters
Shinkawa Yua as Kizaki Rumi
A student of a nursing school. She failed the university entrance exam and ends up attending nursing school which was her backup in case she failed to get into university. She is the type who will must say what she thinks is right. She has few friends from her high school days and is not good at getting along with people. Because of that, she wonders whether a person like her can become a nurse and keeps thinking of resigning every day. However, she changes little by little as she leads her school life.

Ito Sairi as Yamada Chinatsu
A student who attends the same nursing school as Kizaki Rumi. She aimed to become a nurse after her mother died of illness when she was young, and is awkward but diligent. She and her younger sister help their father who runs an eatery. She has a cheerful and friendly personality, but she has no confidence in her own appearance and is also has difficulty telling other people her opinions.

Sakai Miki as Saeki Noriko
A housewife with two children. Her relationship with her husband has broken down.

Sato Honami as Tono Fujika
A student who attends the same nursing school as Kizaki Rumi. She graduated from the law faculty of a top university. A taciturn young lady with both intelligence and beauty.

Kiyohara Sho as Hishikawa Takumi
A houseman training to be a pediatrician. Kizaki Rumi’s first love. He falls in love with Tono Fujika whom he helped to look after when she collapsed from anemia.

Kato Masaya as Bansho Kotaro
The principal of the school which Kizaki Rumi and the other students attend. He always gently encourages his students and has many fans among them. A former heart surgeon. 12 years ago, he caused the death of a patient due to a mistake during a heart surgery and covered it up in order to save himself. He has been terrified of performing operations since then. He married the daughter of the head of the department of surgery and was adopted into the family, but went back to using his own surname after divorce.

This blog contains information and musings on current and upcoming Japanese dramas but is not intended to be comprehensive.
View all posts by jadefrost →
This entry was posted in Fuji TV, Spring 2018 Dramas and tagged Itsumade mo Shiroi Hane. Bookmark the permalink.