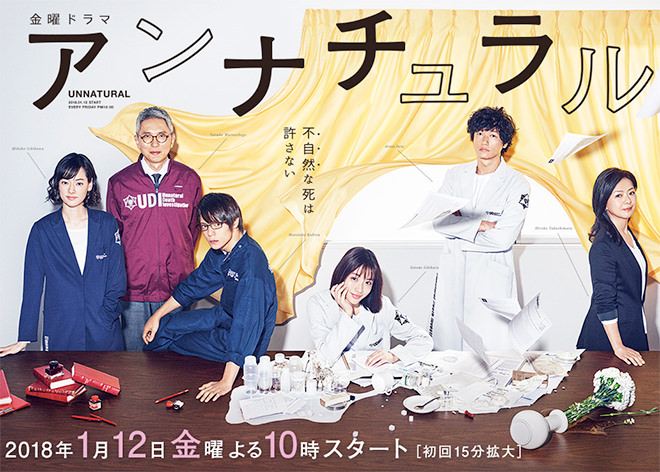 Story
The newly established Unnatural Death Investigation (UDI) Lab in Nishi Musashino City, Tokyo accepts the dead bodies of people who died of unnatural causes which are discovered all across the country. On average, they get 400 bodies from the police and local governments annually. The role of the UDI Lab is to dissect these dead bodies and determine the causes of death. It has two teams of specialists – Team Misumi and Team Nakado. Team Misumi consists of forensic pathologist Misumi Mikoto, lab technician Shoji Yuko and records officer Kube Rokuro while Team Nakado consists of fellow forensic pathologist Nakado Kei and lab technician Sakamoto Makoto. Kamikura Yasuo, the director of UDI Lab, leads them. One day, a middle-aged couple visit the UDI Lab. They cannot accept the cause of death of their only son Wataru who lived alone and suddenly passed away. The police medical officer had diagnosed ischemic heart disease, in which narrowed heart arteries decrease the amount of blood reaching the heart muscle. However, their son was still young. He was also strong and healthy enough to climb mountains as his hobby. Even from a layman’s perspective, ischemic heart disease is questionable. Although the couple asked the police to look into the cause of death a little harder, but they are flatly rejected since there is no foul play. Mikoto’s team dissect the body right away. Instead of abnormalities of the heart, they discover symptoms of acute kidney failure. They suspect Wataru died by drug poisoning. However, they cannot identify the drug that caused his death despite a detailed examination. Meanwhile, the team finds out that a young female colleague who worked together with Wataru suddenly died of unknown reasons the day after he passed away. When Mikoto, Rokuro and Yuko are inspecting Wataru’s apartment, his fiancee Baba Michiko who was also the first person to discover him dead, shows up. Her job is to develop powerful medical toxicants. They are unable to detect the nameless poison using current tests for poisonous substances which can only do a comparison with existing poisons. In other words, it is the perfect crime. She calmly smiles as she tells the team, “Do I have an alibi when he died? No. I was alone at home so I have no alibi.” What will Mikoto and the rest do?

Characters
Ishihara Satomi as Misumi Mikoto
The forensic pathologist of Team Misumi. One out of approximately 170 registered forensic pathologists in Japan, she has 1,500 autopsies under her belt and trained as an associate professor at medical school. She arrived at the newly established UDI Lab in Nishi Musashino City four months ago. Because she has a rational personality, she prefers to getting over any problem that occurs with brains and smiles rather than pointless fights. She wishes to live happily with everyone but reality is harsh. She is fiercely opposed to jeopardising the human right to life due to some incident. She believes there is no beautiful death in this world, death is the end.

Iura Arata as Nakado Kei
The forensic pathologist of Team Nakado. He has has about 3,000 autopsies under his belt. He used to be in Nisho Medical University’s department of forensic medicine, but it is rumoured that he was dismissed because of trouble. Even though it has been a year since he came to the UDI Lab, his lab technician immediately resigned and he has no records officer because of his bad attitude and bad mouth. He repeatedly clashes with Misumi Mikoto because he has crushed his values is capable of doing anything to achieve his goals. He has a network of funeral parlours and seems to be making them search for something but … …

Kubota Matsutaka as Kube Rokuro
The records officer of Team Misumi. A medical student. He was hired to work part-time. He is responsible for photographing and documenting autopsies. He is the third son of a family of doctors. He finally entered a third-rate medical college on his third try but he has been indifferent up until now. He gradually begins to learn about the world of forensic medicine by tagging along on autopsies at the UDI Lab and investigations at the scene. He is good with the internet and gadgets. At times, he displays the deductive skills and energy of a detective, but he is not exactly precise.

Ichikawa Mikako as Shoji Yuko
The lab technician of Team Misumi. A pharmacy graduate. She has been with the UDI Lab from the time it was established. Before that, she worked at the medical examiner’s office. Her personal life comes before work. Her immediate problem is that there are no encounters when she works, only dead bodies in front of her. She is intense in her likes and dislikes. She does not want to be involved with people she does not like as much as possible. This is why she practically does not talk to Nakado Kei but is candid with other people. She has been acquainted with Misumi Mikoto since her days at the medical examiner’s office and they get along.

Matsushige Yutaka as Kamikura Yasuo
The director of the UDI Lab. He was a former staff member of the Ministry of Health, Labour and Welfare’s Health Policy Bureau. There is talk that he decided to be reassigned to the UDI Lab in the wake of investigating the unidentified dead bodies in the Great East Japan Earthquake but there are also rumours that he was simply parachuted in. As a large part of the UDI Lab’s finances are subsidies from the National Policy Agency and Ministry, he constantly feels a sense of crisis since it could close down anytime. However, he does not convey this to his members and lets them do whatever they like.

Fukushi Seiji as Sekiya Satoshi
Misumi Mikoto’s boyfriend. They have been dating for three years and he wants to get married.

Yakushimaru Hiroko as Misumi Natsuyo
Misumi Mikoto’s mother. A lawyer who works for a law firm, she is in charge of civil cases such as divorce. She has a straightforward personality and will immediately act on what she thinks is good which may embarrass her children Mikoto and Akihiko.

This blog contains information and musings on current and upcoming Japanese dramas but is not intended to be comprehensive.
View all posts by jadefrost →
This entry was posted in TBS, Winter 2018 Dramas and tagged Ishihara Satomi, Iura Arata, Kubota Masataka, Matsushige Yutaka, Unnatural. Bookmark the permalink.