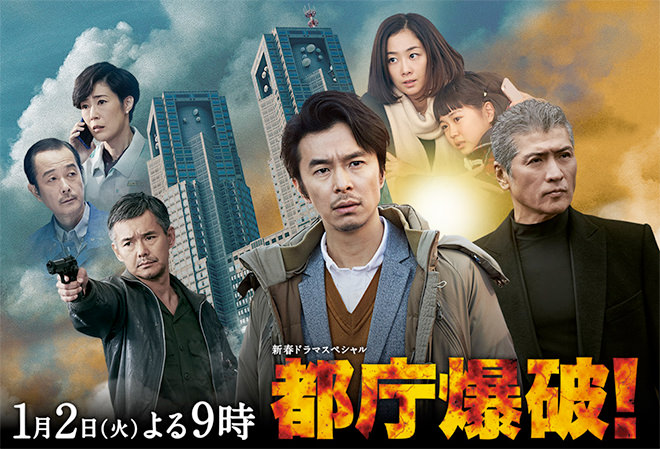 Date: From 9.00 p.m., 2 January 2018
Scriptwriters: Yamaura Masahiro (Zenigata Keibu Series, Zenryoku Shissou, Umi ni Furu), Ushio Kentaro (Chiisana Kyojin, Mutsuu, Heat), Tsuchiya Ken
Original Work: Tochou Bakuha by Takashima Tetsuo
Cast: Hasegawa Hiroki, Kikkawa Koji, Yuka, Wada Masato, Hayami Akari, Maiguma Katsuya, Hirasawa Kokoro, Lily Franky, Ozawa Yukiyoshi, Terajima Shinobu, Watabe Atsuro
Synopsis: On Christmas Eve in the bustling Shinjuku district, former Self-Defence Force officer Hongo Yuji (Hasegawa Hiroki) parts with his wife Mayuko (Yuka) and their daughter Asami (Hirasawa Kokoro) who are going to the Tokyo Metropolitan Government Office building’s observation deck. He meets his friend Cain Takamura (Kikkawa Koji), a third-generation Japanese American who is an undersecretary of state at the US Department of Defence. The two men have been friends ever since Cain’s subordinate was saved by Hongo when they were in Iraq. Cain asks why Hongo quit the Self-Defence Force. Hongo is evasive in his reply. Some incident led him to lose confidence in his work and at the same time question whether he can make his family happy. At that moment, a thunderous noise reverberates through the streets of Shinjuku. Hongo and Cain rush outside and cannot believe the scene they are seeing. The Tokyo Metropolitan Government Office building was blown up. They head to the building in the midst of the panic. Desperate to learn whether his wife and daughter are safe, Hongo discovers that the worst has happened. An international terrorist organisation IF was behind the blast and members of the public have been taken hostage including Hongo’s wife and daughter and a pregnant Sakurai Yui (Hayami Akari). A terrorist called M (Watabe Atsuro), the man at the centre of IF, has rallied fanatic supporter. Both fireman Ebihara Minoru (Wada Masato) and detective Maruyama Naoto (Ozawa Yukiyoshi) of the Tokyo Metropolitan Police’s Public Security Department who rushed to the scene, are speechless in the face of this situation which they never thought would happen. Learning that his daughter believes that he will come and save her, Hongo decides to infiltrate the Tokyo Metropolitan Government Office building together with Cain. IF claims responsibility for the explosion and makes demands on the Japanese government. If the government does not comply, they will blow up the building further with the bombs in the building. The governor Oike Yukiko (Terajima Shinobu) sets up a task force but Prime Minister Misono Sakutaro (Lily Franky) says the government will lead the response, and the two of them clash. However, the IF is about to set off another terrible act of terrorist which will embroil Tokyo.
Official Website: www.tbs.co.jp/tocho-bakuha