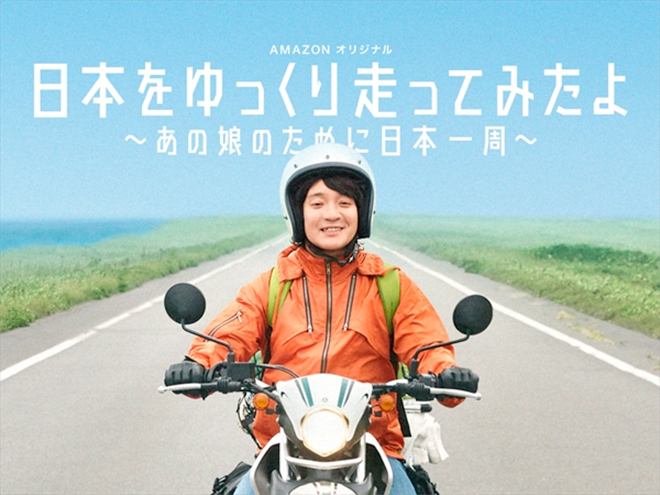 Broadcast
From 20 October 2017 (updated on Fridays)

Story
32-year-old Yoshimoto Koji is a manga writer. In Utsunomiya, He made a promise to Eri whom he likes, that he will go around Japan and come back to town by her birthday. Koji is stuck in his life but aims to make a circuit of the country on motorbike to become a strong man suitable for Eri and then confess his feelings. He takes off from the foot of Tokyo Skytree and on the third day, he finally arrives at Mt Fuji. However, Koji cannot even pitch a tent well and is nothing but anxious as he looks at the map of Japan spread out in front of him. Even so, he goes to Mie Prefecture where he visits Sada and Miyuki, a couple who were his seniors in university, and sees that they have become fine parents and homeowners. When asked by Sada as well as a talkative camper whom he met at Mt Fuji why he is making a circuit of the country, he says he had declared to Eri, “I want to be strong.” The next morning, Koji races off from Ise Shima. But he runs into problems with his motorbike. The gasoline stand employee he seeks help from is completely unhelpful and he gets caught in the rain in a streak of bad luck. Koji somehow makes it to a ferry bound for Shikoku after getting his motorbike repaired. What awaits him is the very loud monologue of a boring man Totsuka who is staying in the same passenger cabin. During this journey around Japan, Koji meets other school friends and clumsily overcomes incidents in his own way.

This blog contains information and musings on current and upcoming Japanese dramas but is not intended to be comprehensive.
View all posts by jadefrost →
This entry was posted in Amazon Prime, Fall 2017 Dramas and tagged Hamada Gaku, Motokariya Yuika, Nihon o Yukkuri Hashitte Mita yo. Bookmark the permalink.