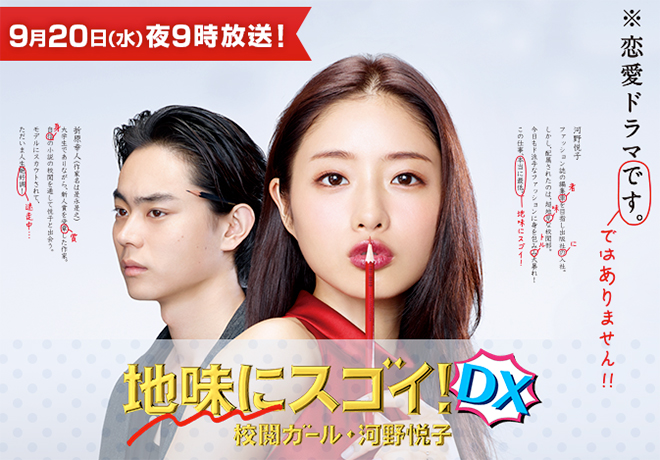 Date: From 9.00 p.m., 20 September 2017
Scriptwriter: Nakatani Mayumi (Dear Sister, Sono Hi no Maeni, Last Cinderella)
Original Work: Kouetsu Girl Series by Miyagi Ayako
Cast: Ishihara Satomi, Suda Masaki, Honda Tsubasa, Wada Masato, Eguchi Noriko, Aoki Munetaka, Kishitani Goro, Kimura Yoshino (guest star), Sano Hinako (guest star)
Synopsis: It has been one year since Kouno Etsuko (Ishihara Satomi) transferred to the editorial department of the fashion magazine ‘Lassy’ from the proofreading department. She is also dating non-fiction writer Orihara Yukito (Suda Masaki) and living life to the fullest. One day, a new chief editor Nikaido Rin (Kimura Yoshino) comes to Lassy. She has gone from one publishing company to another and turned around many magazines. Lassy’s circulation has been sluggish due to the slump in the publishing industry and Nikaido has been brought in to shore it up. She gives the staff of the editorial department notice that the contracts of veterans who have been involved from the time of the inaugural issue, will be terminated. Etsuko protests but this falls on deaf ears. Morio Toyoko (Honda Tsubasa) warns her not to go against Nikaido but Etsuko ignores her advice and points out the inconsistencies in a special feature article on an excursion to Okutama to Nikaido. However, Nikaido asserts that a fashion magazine does not need strict proofreading. A very stressed Etsuko visits the proofreading department after a long absence. The department head Takehara Sho-on and the other members warmly welcome her. Etsuko decides to tour Okutama with Yoneoka Mitsuo and Fujiiwa Rion to confirm the article’s contents. While they are there, she thinks of a new feature. Her idea is adopted by Nikaido who begins to have expectations of her. She is told to go with her on a business trip to Milan. Meanwhile, Yukito is introduced by Kaizuka Hachiro (Aoki Munetaka) to a new editor Tachibana Karen (Sano Hinako). Kaizuka has been tasked with being the editor in chief of a commemorative book for the 50th anniversary of the founding of their company and is busy. He says Karen will serve as Yukito’s editor instead. Karen is a big fan of Yukito and wait on him hand and foot. The two of them quickly become close and Etsuko is deeply concerned. In the middle of this, Nikaido announces that Lassy will cease print publication and become completely digital. Nikaido wants to make Etsuko the deputy editor of the digital publication. However, Etsuko opposes the discontinuation of the magazine and is told by Nikaido that she is fired. Faced with crisis in her work and romance, what will Etsuko do?
Official Website: www.ntv.co.jp/jimisugo

This blog contains information and musings on current and upcoming Japanese dramas but is not intended to be comprehensive.
View all posts by jadefrost →
This entry was posted in NTV, Summer 2017 Drama Specials and tagged Aoki Munetaka, Eguchi Noriko, Ishihara Satomi, Jimi ni Sugoi! Series, Kimura Yoshino, Suda Masaki. Bookmark the permalink.