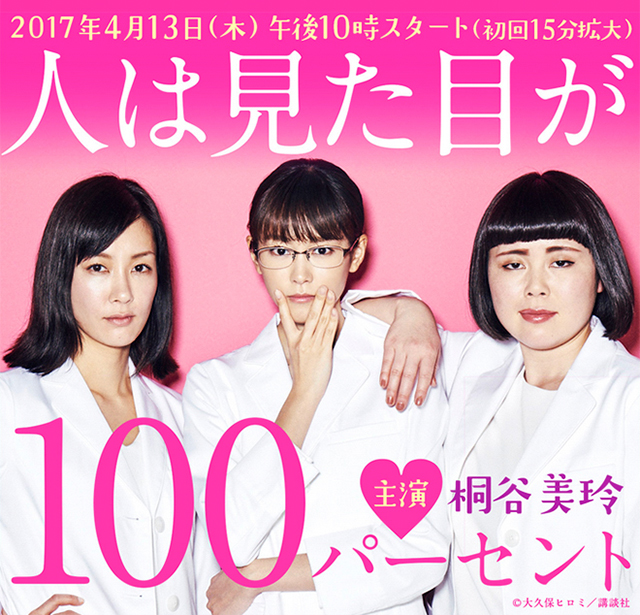 Story
Jounouchi Jun is a researcher who analyses materials to make paper at a paper manufacturer, Hachioji Paper. She has never been interested in fashion and makeup since she was a child and at some point, she ended up at the bottom rung of stylishness; left behind by the girls around her. Jun lacks self-confidence, is unpopular with men and also poor at girls talk. One day, it is announced that the third research lab, which Jun and fellow researchers Maeda Mitsuko and Sato Seira belong to, will be absorbed into the large cosmetics company Clairella Japan. Clairella has an office in Marunouchi with the popular Hair Salon Luce staffed by handsome hairstylists on the first floor. It is a company in a fashionable world that has never been a part of Jun’s life so far. Clairella has taken notice of the moisture-rich cellulose nano fibre which Jun and the others have been researching and seems to want to apply it to a new foundation. When Jun, Mitsuko and Seira attend the company’s New Year’s party to get acquainted, they are overwhelmed by the glitz. On top of that, Jun wins Clairella’s popular cosmetic product in a lucky draw but ends up feeling extremely embarrassed on stage because she does not know to use it. In an attempt to flee the stage, she misses a step and loses consciousness. Kunikida Osamu, the head of the Marunouchi research centre who had been watching this with a cold look, together with Clairella’s general manager Matsuura Eiko, tells Jun bluntly to pay more attention to her appearance in the future precisely because appearance is everything. A greatly embarrassed Jun, Mitsuko and Seira decide to learn about the beauty previously unknown to them and improve their skills. They quickly start to research trendy makeup. After some difficulty, the three of them finish their makeup and stand in front of their colleagues Maruo Takuma and Misawa Motoki, but … …

Characters
Kiritani Mirei as Jounouchi Jun
A researcher who works at a paper manufacturer. She is earnest but lacks self-confidence, is unpopular with men and practically does not wear makeup or stylish things. Because she has not done her best and been too caught up in research that she has ended up at the bottom rung of stylishness. She realises that she is possibly not a woman but a pseudo one because of work.

Mizukawa Asami as Maeda Mitsuko
Jounouchi Jun’s colleague, She is married and has a child. When she was young, she wore the loose socks and mini skirts that were in fashion at the time and wore gaudy makeup. But ever since she got married and had a child, she has been busy with household chores and child rearing and ended up out of touch with beauty and trends. She laments that she is a wife and mother but not a woman.

Buruzon Chiemi as Sato Seira
Jounouchi Jun’s colleague. She has overwhelming confidence in herself but has not had any dating experience. A plump woman who loves eating. She thinks she will be cute if she is fashionable but does not know how to do it. She wears unique makeup.

Narita Ryo as Sakaki Keiichi
A handsome hairstylist whom Jounouchi Jun meets by fate and falls in love with.

Machida Keita as Maruo Takuma
A boring researcher who works in the same company as Jounouchi Jun, Maeda Mitsuko and Sato Seira. He marvels at Jun, Mitsuko and Seira’s special research on beauty which takes place after work ends and makes mercilessly incisive quips to the girls who are dead serious about beauty and female power.

Suzuki Kosuke as Kunikida Osamu
The head of Clairella’s Marunouchi research centre and Matsuura Eiko’s right-hand man. He begins to coach Jounouchi Jun and the others who are ignorant about beauty and female power, the latest makeup and fashion.

Muroi Shigeru as Matsuura Eiko
The general manager of Clairella. She believes that a person’s appearance is everything more than anyone else and is feared by employees. She is involved in the work of Jounouchi Jun, Maeda Mitsuko and the rest.

This blog contains information and musings on current and upcoming Japanese dramas but is not intended to be comprehensive.
View all posts by jadefrost →
This entry was posted in Fuji TV, Spring 2017 Dramas and tagged Hito wa Mita Me ga 100%, Kiritani Mirei, Mizukawa Asami. Bookmark the permalink.