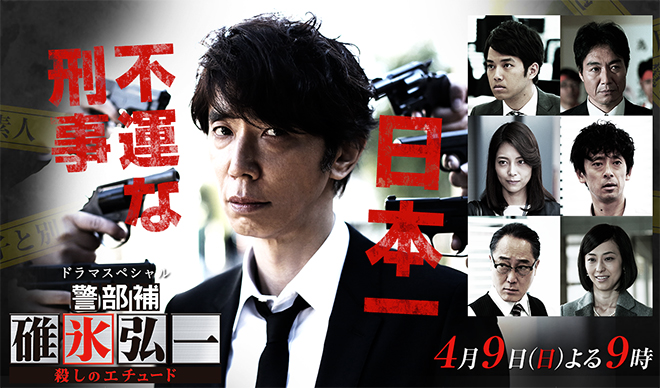 Date: From 9.00 p.m., 9 April 2017
Original Work: Etude by Konno Bin
Scriptwriter: Ikegami Junya (Higanbana, Deiri Kinshi no Onna, Gokuaku Ganbo)
Cast: Santamaria Yusuke, Aibu Saki, Takito Kenichi, Miura Takahiro, Hata Mei, Konno Mahiru, Haba Yuichi, Sano Shiro
Synopsis: A crowd has gathered for a popular band’s live performance but a woman in the crowd is stabbed to death, and a man called Ishigari (Igarashi Kento) is overpowered by eyewitnesses. The next day, while Usui Koichi (Santamaria Yusuke) is accompanying his daughter Haruna (Hata Mei), who lives separately with his estranged wife Yoshiko (Konno Mahiru), to a piano competition, he witnesses the stabbing of a woman at a train station. A male suspect called Noma (Shibuya Kento) who had been subdued by commuters is quickly arrested. Usui has transferred from the First Investigative Division to the Equipment Division in order to spend more time with his family, but he is ordered by Nishikawa Shusaku (Haba Yuichi) to participate in the investigation into the series of fatal stabbings because he was a witness in this case. Haruna is thankfully unscathed but the incident leaves Yoshiko fuming. As a result, the possibility of an end to their separate living arrangement looks increasingly far off. Usui is disheartened. He joins the First Investigative Division’s Fifth Section for the first time in a long while. Although the section head Suzuki Shigeru (Sano Shiro) welcomes him good-naturedly, detective Takagi Ryuichi (Takito Kenichi) who joined at the same time as Usui, bluntly declares his refusal to “work with a fellow who fled to the Equipment Division”. Even Usui’s junior Nashida Yotaro (Miura Takahiro) wears an expression that suggests that he shares Takagi’s thoughts. Then Nishikawa brings Fujimori Sae (Aibu Saki), a profiling expert from the National Research Institute of Police Science. The suspects of the two fatal stabbings were arrested at the scene but both deny their crimes. Because there are also no clear motives, the Fifth Section is put in charge of the investigation. The detectives are very unhappy about gathering physical evidence for the cases which are almost solved and resent Usui’s participation. Nishikawa proposes pairing Usui with Sae to improve the atmosphere and Suzuki is quick to back it. A gloomy Usui begins to get into action with Sae. She shows him a strange comment on a forum, “The etude is not over yet. The real thing is going to happen next. The etude is indeed the piece that Usui’s daughter Haruna had said she would play at the competition. According to Sae, it means a practice piece and also an improvisation in music terms but … … Through Usui and Sae’s investigation, it is determined that all eyewitnesses in both cases, including Usui, did not see the moment that the victims were stabbed. Moreover, Ishigari and Noma’s connections to the victims and motives are not known. Sae suggests that the two suspects are innocent and the cases were committed by the same criminal. In front of Takagi and the rest of the detectives, she points out the possibility that Usui had mistakenly arrested a man and even analyses that Usui and the other eyewitnesses had been lulled into that fuzzy conclusion because of their sense of justice. Even though Usui’s pride has been shattered to pieces, he agrees that Sae has a valid point. He calmly recalls that there was a “well-meaning citizen” at both crime scenes who arrested the suspect at the outset and left without giving a name. Is the real criminal this “well-meaning citizen”?
Sae nods in response to his question. Usui and Sae take a fresh look at the two cases from their meeting with the people connected to the victims. As unexpected facts gradually begin to emerge, an eyewitness appears and says he saw the face of the real criminal who was not Noma at the second crime scene. Although it seems that the real criminal’s arrest is near because of this new eyewitness, the investigation progresses in an unanticipated direction due to Sae’s keen analysis.
Official Website: www.tv-asahi.co.jp/usuikoichi

This blog contains information and musings on current and upcoming Japanese dramas but is not intended to be comprehensive.
View all posts by jadefrost →
This entry was posted in Spring 2017 Drama Specials, TV Asahi and tagged Aibu Saki, Keibuho Usui Koichi Series, Miura Takahiro, Sano Shiro, Santamaria Yusuke, Takito Kenichi. Bookmark the permalink.