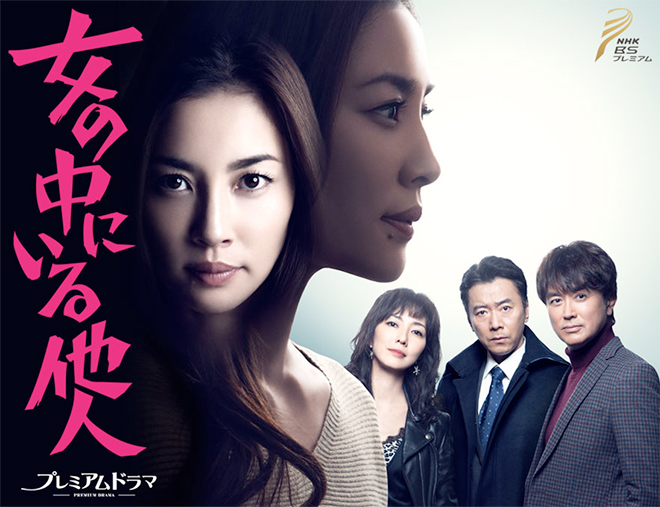 Story
Tanuma Yuriko is a housewife who lives peacefully with her husband Kazuo, their two children and mother-in-law Hatsue. One day, news breaks that Saori, the wife of Kazuo’s friend Kusumoto Masafumi, was strangled to death. From that day on, Kazuo starts behaving peculiarly and Yuriko becomes suspicious of what he is hiding. He confesses that he had been having an affair with Saori. Yuriko suspects that her husband murdered her. Realising that he cannot escape, Kazuo acknowledges that he killed Saori and tries to give himself up to the police. However, Yuriko desperately holds him back. She decides to cover up his crime to protect their peaceful family life. People trying to expose the truth appear in Yuriko’s way including a former friend Ito Michiko who obsessively clings to her, Kazuo’s devious subordinate at work Kuroki Yasunari, and the detective Hirose Shinya who is pursuing Saori’s murderer but has no conclusive evidence. Michiko had seen Kazuo come out of Saori’s apartment and starts plotting to corner Yuriko whom she hates because of their history. Before Yuriko realises it, another self whom she was not aware of, starts taking action for the sake of protecting her beloved family … …

Characters
Seto Asaka as Tanuma Yuriko
An ordinary housewife who is married Tanuma Kazuo. She has two children and has a happy family life. However, she learns about her husband’s crime and transforms to protect the family.

Omi Toshinori as Tanuma Kazuo
Tanuma Yuriko’s husband. A department manager in a construction company. He is having an affair with Saori, the wife of his friend Kusumoto Masafumi, and ends up strangling her to death in the middle of their fling.

Ishiguro Ken as Kusumoto Masafumi
Tanuma Kazuo’s good friend and Kusumoto Saori’s husband. He runs a publishing company. He gives the police a false statement about his actions before and after the time of the murder for some reason.

Kino Hana as Tanuma Hatsue
Tanuma Kazuo’s mother. She lives in harmony with her daughter-in-law Yuriko and two grandchildren. She makes her son frustrated with her many unnecessary comments.

Itaya Yuka as Ito Michiko
Tanuma Yuriko’s former friend. She runs a wine bar and shares an apartment with the late Kusumoto Saori. She hates Yuriko because of something in their past.

Nishiyama Mayuko as Kusumoto Saori
Kusumoto Masafumi’s wife. She does flower arrangement. She is having an affair with Kazuo and dies in the middle of their fling.

This blog contains information and musings on current and upcoming Japanese dramas but is not intended to be comprehensive.
View all posts by jadefrost →
This entry was posted in NHK, Winter 2017 Dramas and tagged Ishiguro Ken, Itaya Yuka, Komoto Masahiro, Omi Toshinori, Onna no Naka ni Iru Tanin, Seto Asaka. Bookmark the permalink.