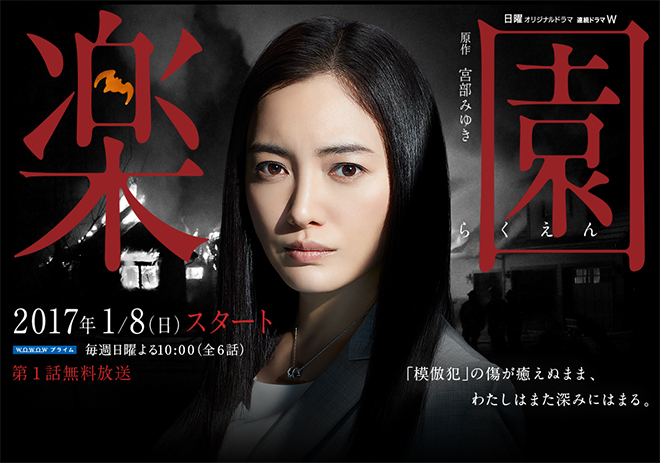 Story
One day, as the case of the Doisaki couple who murdered their 15-year-old daughter Akane and hid her body under the floor of their home for 16 years is creating a stir in the news, a housewife named Hagiya Toshiko comes to visit Maehata Shigeko, a writer working for a small editorial production company. This lady says her 10-year-old son Hitoshi may possess the special ability to see the memories of other people and presents a drawing that he had illustrated. It shows a young lady with an ashen face lying down inside a home with a distinctive weather vane in the shape of a bat which closely resembles the case of the Doisakis. Shigeko accepts Toshiko’s request to investigate the drawing even though she only half believes it. However, Hitoshi dies in a traffic accident. Meanwhile, Takahashi Harumi, the lawyer for Doisakis, starts to take action to protect the couple. Seiko, their second daughter, is told by Harumi that her parents are about to severe ties with her and is bewildered. At that time, a female high school student is held captive in some neighbourhood.

Characters
Nakama Yukie as Maehata Shigeko
A writer working for a small editorial production company. She was traumatised by her involvement in the “Death Villa” case nine years ago, but accepts Hagiya Toshiko’s request to investigate a new case and embarks on gathering information to break free of the trauma of the past.

Kuroki Hitomi as Takahashi Harumi
A capable lawyer who has a strong sense of justice and is aways cool headed. She becomes the contact person for reporting and gathering news on the Doisakis. The interests of her clients are her priority and she strives to protect them from the mass media.

Kaho as Inoue Seiko
The second daughter of the Doisakis and younger sister of the murdered Akane. She is pursued by the mass media because of the case and has also cut ties with her parents. She wrestles with the thought that she has no place of refuge.

Kobayashi Kaoru as Doisaki Hajime
The father of Akane and Seiko. He confessed to a house fire, murdering his daughter Akane 16 years ago and hiding her under the floor of the house. He is released because the statute of limitation has already passed. He and his wife Sakiko are now hiding from the public.

Kaneko Nobuaki as Miwa Akio
A mysterious man who has confined a female high school student in his house.

Matsuda Miyuki as Doisaki Sakiko
Doisaki Hajime’s wife. She and her husband have lived with a secret under the floor of their house. She became ill after the case came out in the open and has been sick in bed.

Nishida Naomi as Hagiya Toshiko
A single mother who lives with her 10-year-old son Hitoshi. She believes Hitoshi has a special ability and approaches Maehata Shigeko about it.

Ikeda Narushi as Akitsu Shingo
A detective of the Tokyo Metropolitan Police Department. He was in charge of “Death Villa” case the nine years ago. He is Maehata Shigeko’s informant.

Riju Go as Nozaki Eiji
The company president of Noah Edition the editorial production company that Maehata Shigeko works for.
Hosoda Yoshihiko as Inoue Tatsuo
Inoue Seiko’s husband. After the case involving his in-laws comes to light, he is forced to live apart from Shigeko even though he is worried about her.

Oshinari Shugo as Amikawa Koichi
A criminal on death row. He was the main culprit in the “Death Villa” case that claimed many victims nine years ago.

This blog contains information and musings on current and upcoming Japanese dramas but is not intended to be comprehensive.
View all posts by jadefrost →
This entry was posted in Winter 2017 Dramas, WOWOW and tagged Kaho, Kobayashi Kaoru, Kuroki Hitomi, Miyabe Miyuki, Nakama Yukie, Rakuen. Bookmark the permalink.