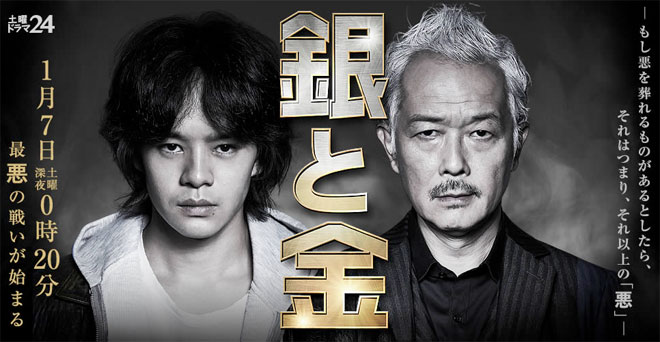 Story
Morita Tetsuo is a good-for-nothing who can never get ahead and has been venting his anger through gambling. He keeps losing until he is penniless. One day, Tetsuo meets Hirai Ginji, an influential fixer who controls the underworld, at a race track. Drawn to the charismatic Ginji’s villainy and genius at making billions easily by wringing money from villains, Tetsuo dreams of becoming a person called “Kin” to surpass “Gin” and makes the decision to set foot into the underworld where money is everything. Risky, extreme money games between evil and evil that pulverise both financially and mentally unfold. The targets are banks, big corporations, wealthy people and politicians. Thousands, millions and billions are waged and plundered from the powerful who show their selfishness.

Characters
Ikematsu Sosuke as Morita Tetsuo
A good-for-nothing who can never get ahead and has been venting his anger through gambling. While he is on a losing streak, he is accosted by Hirai Ginji at the race track and that leads to his decision to live in the underworld where villains hold a lot of money. He moves on instinct without regard for profit and has good luck. His ambition is to become a person called “Kin” to surpass “Gin”.

Lily Franky as Hirai Ginji
An influential fixer who controls the underworld. He has outstanding abilities in all aspects and his own philosophy about life. He brings Morita Tetsuo into the underworld on some condition, and hopes to develop his ability. Although he wrings money from villains, he reasons that “A greater evil conquers evil”. He eventually uses powerful politicians and attempts to control Japan’s business community.

Makita Sports as Yasuda Iwao
The former ace of the Tokyo Metropolitan Police Department’s First Investigative Division. Although he was an outstanding detective, he easily succumbed to his desires and gradually became involved in vices. He now lives in the underworld with Hirai Ginji. He is trusted by Ginji and often acts alone. He is more human compared to Tatsumi Kyoko and Funada Masashi.

Usuda Asami as Tatsumi Kyoko
A former newspaper journalist. She has been supporting Hirai Ginji by using her past experience and information gathering ability. Bar Fuller which she runs becomes the hangout for Ginji and his men. Her past is shrouded in mystery and even Ginji does not know much it.

Murakami Jun as Funada Masashi
A former prosecutor of the Tokyo District Public Prosecutor’s Office’s Special Investigations Department. As the young ace of the public prosecutor’s office, he made contributions in cases involving tax evasion by big companies and bribery in political and business circles. But that antagonised his boss. He was transferred and forced to resign. He is a broker who extorts businesses based on his background. He has the confidence of Hirai Ginji as the cerebral guy.

This blog contains information and musings on current and upcoming Japanese dramas but is not intended to be comprehensive.
View all posts by jadefrost →
This entry was posted in TV Tokyo, Winter 2017 Dramas and tagged Emoto Akira, Gin to Kin, Ikematsu Sosuke, Kora Kengo, Lily Franky, Makita Sports, Sano Shiro, Usuda Asami. Bookmark the permalink.