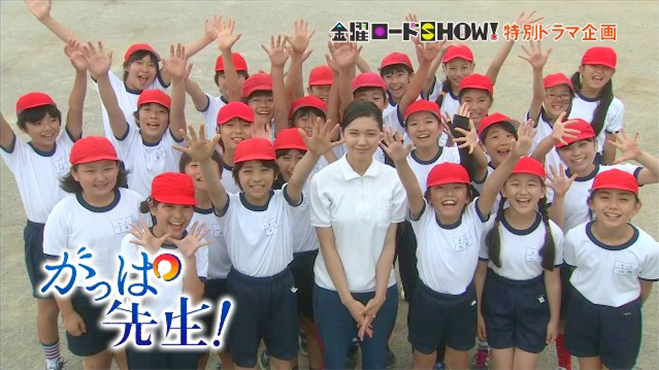 Date: From 9.00 p.m., 23 September 2016
Original Work: Minna de Tonda by Takita Yoshihiro
Scriptwriter: Okazaki Satoko
Cast: Nikaido Fumi, Sakaguchi Kentaro, Ohno Takuro, Tabata Tomoko, Kondo Yoshimasa, Abe Sadao, Kishimoto Kayoko
Synopsis: 24-year-old Muramoto Aiko (Nikaido Fumi) is a rookie teacher at Aohane Elementary School. A native of Ishikawa Prefecture, Aiko is put in charge of a class for the first time. In her greeting to the students, a nervous Aiko made a slip of the tongue when she meant to say that she wanted to do her best – “Gappa” in local Ishikawa dialect. The class had burst into laughter and she has been called “Gappa-sensei” since then. Aiko gets the children to exchange diaries and works hard to make them the best class. She is marked by vice principal Igarashi Kozo (Kondo Yoshimasa) because her overenthusiastic actions are sometimes out of line. The second school term begins and the school’s sports day draws near. It is decided that the fifth grade students will participate in skipping rope for the inter-class games. Even the children of Class 5/2 start practicing rope jumping. Wanting to be recognised for her ability as a form teacher, Aiko also gets fired up for victory. Meanwhile, a childhood friend Saeki Ryuji (Sakaguchi Kentaro) comes to Aiko’s apartment. He says he has quit his company and also broken up with the girlfriend he had been living with. Aiko is put in a quandary when she is asked to let him stay at her home. If this leaks out, she does not know what she will be told by Igarashi again. Aiko makes Ryuji promise that he will only stay one night, but he just imposes himself. Class 5/2 continues practising for the inter-class games on sports day. However, one of the children, Katsuo (Tanaka Kanau), keeps tripping on the rope with his right foot. Aiko decides to give him personal training. However, Igarashi learns about this and reprimands Aiko. He informs her about the boy’s past. Katsuo met with an accident before entering elementary school that resulted in the death of his mother and injury to his right leg. Although his movements are restricted, his handicap has not been disclosed to the other children according to his wishes. Aiko goes to Katsuo’s house to make an apology. Katsuo’s father Sentaro (Abe Sadao) asks Aiko to consider special measures so that his son will not be hurt if he is to do rope jumping. Aiko discusses Katsuo’s challenge at a staff meeting. In the end, they settle on having him cheer for his classmates instead of skipping rope, but … …
Official Website: www.ntv.co.jp/gappa0923

This blog contains information and musings on current and upcoming Japanese dramas but is not intended to be comprehensive.
View all posts by jadefrost →
This entry was posted in NTV, Summer 2016 Drama Specials and tagged Abe Sadao, Gappa-sensei. Bookmark the permalink.