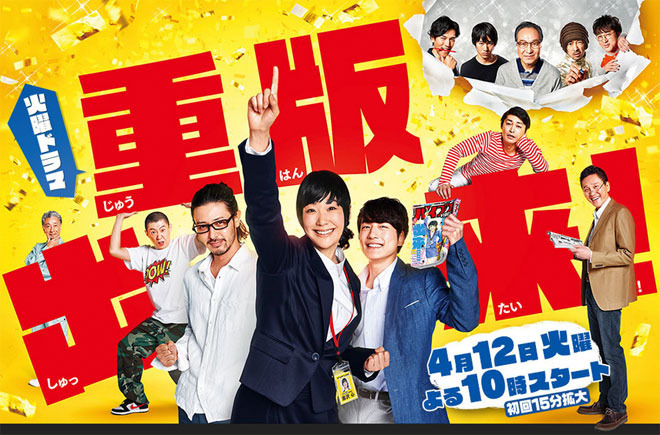 Story
Kurosawa Kokoro was aiming for a spot on the Olympic judo team until an injury put an end to that dream. During her athlete days, she was supported by manga. Seeking a place that she can get excited about again after retiring, she takes the entrance exam for the large publishing company Kotokan. Her employment is decided and she is assigned to Kotokan’s editorial department for the manga magazine Shukan Vibes, fresh from college. Kokoro gets involved in meetings with manga artists in charge of series, discovering new manga artists, discussions to decide on the circulation for manga published into books as she learns the basics of editing under senior editor Iokibe Kei. Seeing the low-profile activities to produce a reprint, Kokoro starts to fall under the spell of this world. She is eager to make reprints too. But the reality of the publishing industry is harsh. With the proliferation of e-books, paper books cannot sell in this modern age. She learns that if the circulation drops, they will be pushed into discontinuing a book. At times, they have to consider the comeback of manga artists that have been left behind by the times as well as secret strategies to sell a volume of manga together with the sales rep. Even so numerous challenges lie in wait for the editorial department led by chief editor Wada Yasuki. A manga artist who is the magazine’s draw suddenly announces his retirement and is poached by a rival magazine Emperor. Shukan Vibes is faced with a survival crisis. The editorial department overcomes these adversities and gamble everything on becoming the number one youth magazine.

Characters
Kuroki Haru as Kurosawa Kokoro
A new editor of the manga magazine Shukan Vibes. She was a candidate to represent Japan in judo, but injury ended her career as an athlete. She chooses a publishing company as the place that she can get excited about again and passes the entrance exam. She is constantly positive and offers her opinions, but she is a person with a strong heart rather than strong will. She is given the nickname “little bear” and even though the department quickly stops treating her as a female, she is a girl who loves reading Hanayori Dango. Her personality may just be able to change Vibes, Kotokan and Japan!

Odagiri Joe as Iokibe Kei
The deputy editor of Shukan Vibes who assumes the role of Kurosawa Kokoro’s mentor. He is in charge of Mikurayama Ryu and Takahata Issun. He is a constant workaholic because of his love of manga. Kokoro respects and admires him for his stoicness and passion for his work. Discussions to decide on the circulation brings about a complete change in his usually cool self. On such days, which are key to the sales of manga, it is common for him to go into the location of the meeting in battle mode and dressed to kill.

Sakaguchi Kentaro as Koizumi Jun
An employee for Kotokan’s manga sales department. He was assigned to a department that he did not want and keeps on requesting a transfer for three years, but still cannot get one.
He has no fascination for his job, enthusiasm nor goal. He just does the work he is givern every day. He has no presence to the extent that he is called “ghost” by the employees of the bookshops that he goes to for his sales rounds.

Kohinata Fumiyo as Mikurayama Ryu
Shukan Vibe’s star manga artist who has been active ever since he made his debut 40 years ago. Although he is called one of the persons at the top of the manga industry, he has the habit of saying “If there’s a weekly magazine serialisation, let’s proceed with enough to move it forward by three weeks”. He is a manga artist who is easy to manage and liked even by his assistant because of his genial and caring personality.

Takito Kenichi as Takahata Issun
His debut manga was made into an anime and became a huge hit. He is a popular manga artist who prides himself on a 10-year long serialisation. Because he is the type that reflects his private life in his work just as it is, he is late in turning in his manuscript each time his free-spirited girlfriend Rion leaves home and the story also stops developing.

Nagayama Kento as Nakata Haku
A rookie manga artist who brought in his manga. The manga honed through self study is crude and his drawing ability is horrible, but he possesses the innate qualities that a manga artist should have. He is, in a sense, a diamond in the rough. His talent impresses Shukan Vibes’ editorial department. He does not recognise that he does a bad job at drawing and has an unshakable confidence in making his debut as a manga artist.

Yasuda Ken as Yasui Noboru
The notorious editor of Shukan Vibes who crushes rookies. He is in charge of Ono Yoshihito and Tamaru Haitsu. He makes it a policy not to work overtime and updates social media while at work. He is an oddball who will concoct a reason to decline a request for help from the sales department. But in fact, he is a hit maker who has produced many hits and has made a big contribution to the sales of the manga department.

Matsushige Yutaka as Wada Yasuki
The chief editor of Shukan Vibes whose aim is to beat Emperor, which is the top youth magazine. He has a unrestrained personality and his mood will take a drastic change depending on the outcome of Hanshin’s games. Sales are important to him because of past experience, but he does not dismiss the proposition of delivering interesting manga to the world. When it comes to the crunch, he will make the best decision.

This blog contains information and musings on current and upcoming Japanese dramas but is not intended to be comprehensive.
View all posts by jadefrost →
This entry was posted in Spring 2016 Dramas, TBS/MBS and tagged Juhan Shuttai, Kuroki Haru, Matsushige Yutaka, Nagayama Kento, Odagiri Joe, Yasuda Ken. Bookmark the permalink.