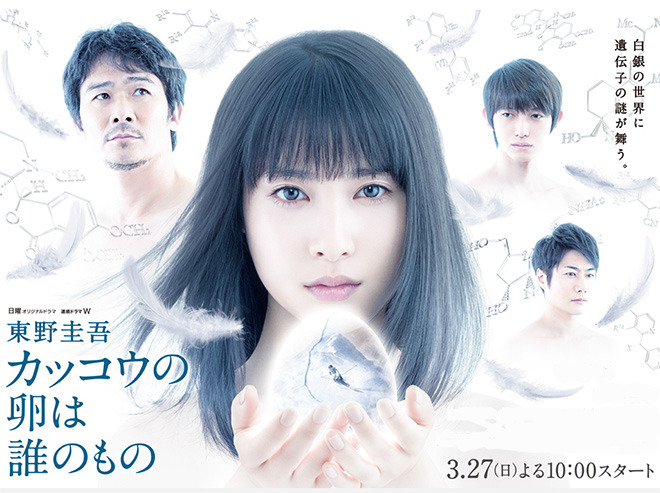 Story
Hida Kazami aspires to be a top skier just like her father Hiromasa. One day, a special genetic pattern that suggests great athletic ability is detected in Kazami and she becomes the focus of media attention for her striking looks too. Wanting to unlock this mystery for the development of a new sports business, a gene researcher Yuzuki Yosuke approaches Hiromasa to carry out further tests on father and daughter, but Hiromasa stubbornly refuses. In fact, he is burdened with a big secret associated with his daughter’s birth. 10 years ago, a newborn was kidnapped and his wife died. Who are the parents of this daughter? At the All Japan Training Camp, Kazami and other young people of different circumstances are training with various emotions. They include Torigoe Shingo who possesses the same sports genes to become a top athlete, but has no interest in skiing; Imai Erika and Kurosawa Kazuma who have proven themselves although they do not have such genes; and Kawanishi Shota who is reaching the age limit and feels a sense of urgency. Then a threatening letter is delivered to the camp. It reads, “Take Hida Kazami off the team or else she will be harmed.” At that moment, a young man is in a hospital reading a story about talent to the children. One day, the bus that Kazami had alighted from before it drove away explodes. A man called Kamijo Nobuyuki who had been on board the bus is critically wounded. Kamijo had confronted Hiromasa about the mystery of Kazami’s birth. Distressing facts are revealed one after another, and then an inexplicable event … …

Characters
Tsuchiya Tao as Hida Kazami
An alpine skier and member of Shinsei Kaihatsu ski club. Her mother passed away when she was a child. She learnt the basics from her father and has set her sights on becoming a top skier. Because she possesses a special gene that suggests great athletic ability, she gets entangled in a dangerous case related to her birth.

Hongo Kanata as Kamijo Fumiya
A leukemia patient. The son of Kamijo Nobuyuki, he should have been KM Construction’s successor, but is now fighting against cancer. He is always surrounded by children at the hospital and keeps talking about talent.

Totsugi Shigeyuki as Yuzuki Yosuke
The deputy director of Shinsei Kaihatsu sports science lab. A gene research who believes in the scientific discovery and and development of the talent of sports athletes. Although he is a calm and collected person he is passionate about research.

Ihara Tsuyoshi as Hida Hiromasa
Hida Kazami’s father. A former Olympic alpine skier who represented Japan. His wife died early and he raised their daughter single-hanededly. However, he has a secret that he can never tell Kazami.

Asano Kazuyuki as Kamijo Nobuyuki
Kamijo Fumiya’s father. The president of KM Construction. A gentleman who calls himself a fan and approaches Hida Kazami. He gets involved in a bus explosion right before her eyes.

This blog contains information and musings on current and upcoming Japanese dramas but is not intended to be comprehensive.
View all posts by jadefrost →
This entry was posted in Spring 2016 Dramas, WOWOW and tagged Higashino Keigo, Hongo Kanata, Kakkou no Tamago wa Dare no Mono, Tsuchiya Tao. Bookmark the permalink.