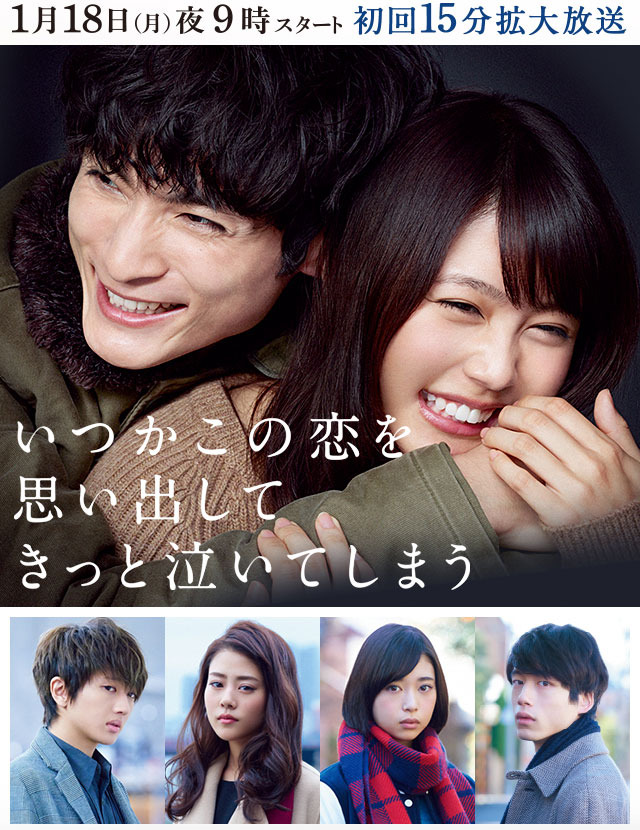 Story
After her single mother passed away when she was a child, Sugihara Oto was raised by adoptive parents Hayashida Masahiko and Chie in a deserted Hokkaido town. Hayashida treats Oto like a domestic helper. If the bedridden Chie did not require Oto to nurse her, Hayashida would not have let her live with them. Because Oto has been trained to “give up” having dreams, she simply accepts the situation and lives cheerfully and bravely. But she is troubled by her adoptive parents attempts to force her into a marriage with a wealthy man 20 years her senior to save the family from poverty. Soda Ren has taken up a job at a Tokyo courier company. He lost his parents early and was brought up in the great outdoors in Fukushima by his grandfather Kenji, who is a farmer. However, his grandfather got swindled and Ren goes to Tokyo in order to earn money to recover the farmland. He dreams that he will be able to live with his grandfather some day, but reality is harsh. His seniors at the company order him around and he works until he is exhausted every day. With the low pay he is unable to save money and has to live a hard life in a shabby apartment. Ren has a girlfriend Hinata Kihoko who routinely stays in his apartment. She has been coming up with money for Ren who has a tendency of getting cheated because he does not know how to suspect people. Although he is uncomfortable with this, he is unable to refuse. One day, Ren discovers an old letter, which is addressed to Oto, inside a bag that his friend Nakajo Haruta had picked up on a trip to Hokkaido. After reading the letter, he feels a strong need to return it to the owner and jumps into a company truck to head for Hokkaido … … By coincidence, Oto decides to go to Tokyo. This is the story of love and growth of six young people from the rural areas who gather in Tokyo.

Characters
Arimura Kasumi as Sugihara Oto
Her mother who raised her single-handedly died young and she was brought up by adoptive parents Hayashida Masahiko and Chie in Hokkaido. She accepts her current circumstances and lives cheerfully. Because her adoptive parents are poor, she is being forced to marry a wealthy man who is 20 years her senior and it distresses her.

Kora Kengo as Soda Ren
His parents passed away early and he was brought up by his grandfather Soda Kenji in Fukushima. He has a kind heart. He dreams of getting back the farmland that his grandfather lost and goes to Tokyo. He gets a job at Kakitani Transportation, a courier company.

Takahata Mitsuki as Hinata Kihoko
Soda Ren’s girlfriend who works for an advertising agency. She has cast off her past and lives it up in Tokyo constantly surrounded by luxury goods. She lends money to Ren who gets cheated and chalks up debt every so often.

Morikawa Aoi as Ichimura Konatsu
Soda Ren’s junior from his hometown. She has had feelings for Ren from way back. She goes to Tokyo with the aim of being a designer. She overstretches herself in her attempt to take on the style of the metropolis and descends into its dark side.

Sakaguchi Kentaro as Nakajo Haruta
Soda Ren’s friend who is bad company. He is detached, lives as he pleases and has never been serious about anything. He frequents Ren’s home.

Nishijima Takahiro as Ibuki Asahi
The son of Ibuki Seijiro, the president of a large nursing care facility. A guy with a shallow character who hits on employees. He loves and hates his great father. He meets Sugihara Oto and develops feelings for her.

Emoto Akira as Hayashida Masahiko
Sugihara Oto’s adoptive father. He will not give Oto and luxuries and enforces a strict life.

Otani Naoko as Hayashida Chie
Sugihara Oto’s adoptive mother. She is now bedridden and Oto takes care of her.

Kohinata Fumiyo as Ibuki Seijiro
He made enormous wealth through his work in nursing care. He looks down on his son Asahi.

Yachigusa Kaoru as Sendo Shizue
She understands Soda Ren well. Her house becomes a hangout for him and the others.

Episodes
#1: Miracle Linked to Lost Letter … The Two of Them Meet
#2: Urban Reality, Growing Feelings … I Want to See You Again
#3: Sudden Kiss, Happy Day
#4: Tearful Confession, Heartrending Cycle
#5: Goodbye … The Fateful Day Suddenly Comes. We’re Now in a Special Moment
#6: An Electrifying Reunion … The Person I Like has Changed!!
#7: Revealed Truth … What Happened to Him?
#8: Tonight, a Love Triangle Begins