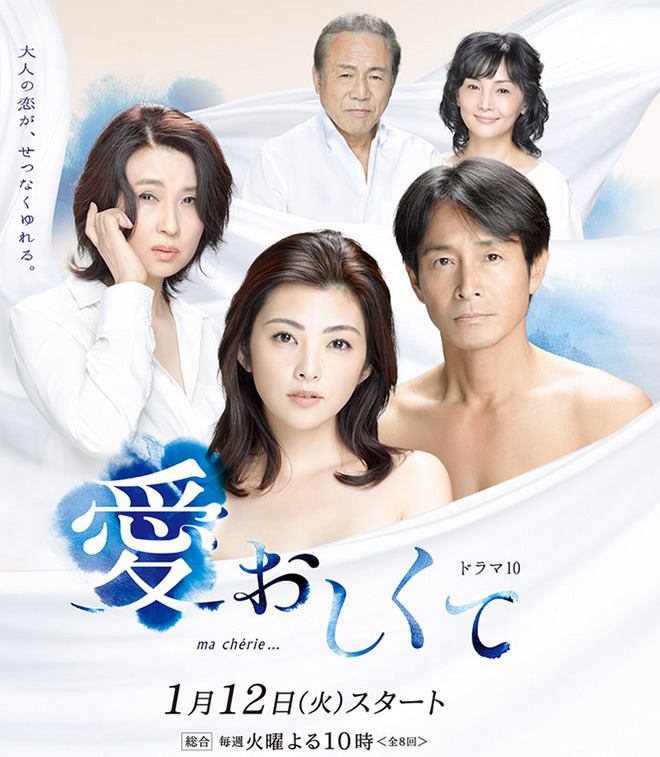 Story
Fujisawa Konatsu has lost love. She was abandoned by her father Tatsuzo who has a mistress; her mother died of illness; and her boyfriend Kyohei cheated on her. The traditional tie-dying craft Arimatsu Shibori is all she lives for. Konatsu visits a workshop in the mountains of Gifu Prefecture in order to become an apprentice to Fukaura Reiko, a master of Arimatsu Shibori. Reiko imposes the care of her unmanageable dog on Konatsu as a condition for becoming her apprentice. This dog was once an animal shelter dog abandoned by people. Konatsu makes the acquaintance of the vet Nakahara Kotaro through this. Although Konatsu hates dogs, she learns about rearing dogs under him. Konatsu starts to get attracted to Kotaro as she interacts with him. In fact, Kotaro, who is gruff but has a deep affection for animals, is in a relationship with Reiko. Konatsu starts to have an effect on the relationship between Reiko and Kotaro little by little. Feeling threatened by Konatsu, Reiko gives her a baptism of fire, and on the other hand, intends to capitalise on Konatsu’s tie-dying talent. Konatsu is soon competing with Reiko as a tie-dying artist and as a female. In the middle of this, Tatsuzo unexpectedly appears in front of Konatsu all of a sudden … …

Characters
Tanaka Rena as Fujisawa Konatsu
A 30-year-old tie-dying artist who has lived alone. Her mother passed away and she was also abandoned by her father Tatsuzo who got himself a mistress. The only thing she lives for is to become the apprentice of Fukaura Reiko, a master of Arimatsu Shibori and she goes to Reiko’s workshop in Gifu Prefecture.

Yoshida Eisaku as Nakahara Kotaro
A 43-year-old vet. He is in a relationship with Fukaura Reiko. But he meets Fujisawa Konatsu through rearing rehabilitated dogs and they get attracted to each other.

Akiyoshi Kumiko as Fukaura Reiko
Fujisawa Konatsu’s 60-year-old teacher. A master of Arimatsu Shibori. An ambitious woman who runs a vast business and also has interactions with the leading figures of the local political and business communities. She ends up fighting with Konatsu over Nakahara Kotaro.

Hirata Mitsuru as Yamazaki Yoshio
The leader of Gifu Prefecture’s business community. He is the chairman of a construction company and a central person in the town’s redevelopment plan. He has a deep and long-standing relationship with Fukaura Reiko.

Mizuhashi Kenji as Sahashi Kyohei
A professor of a famous university’s faculty of architecture. He participates in the town’s redevelopment plan. He made a promise to marry Fujisawa Konatsu in the past, but … …

Kobayashi Nenji as Fujisawa Tatsuzo
Fujisawa Konatsu’s father. He used to be called a master boat builder. But he gets a mistress, abandons his wife and daughter and leaves home. He suddenly shows up in front of Konatsu and tries to mend ties with her.

Minami Kaho as Mikami Shion
Fujisawa Tatsuzo’s mistress. She runs a hair salon and lives with Tatsuzo. As an older, experienced woman, she becomes a big influence on Fujisawa Konatsu.

Honjo Manami as Tachiki Junko
A world famous designer and a partner of Kenji Ogawa. She spots Fujisawa Konatsu’s talent as a tie-dying artist and supports her activities.

This blog contains information and musings on current and upcoming Japanese dramas but is not intended to be comprehensive.
View all posts by jadefrost →
This entry was posted in NHK, Winter 2016 Dramas and tagged Hirata Mitsuru, Itooshikute, Kobayashi Nenji, Tanaka Rena, Yoshida Eisaku. Bookmark the permalink.