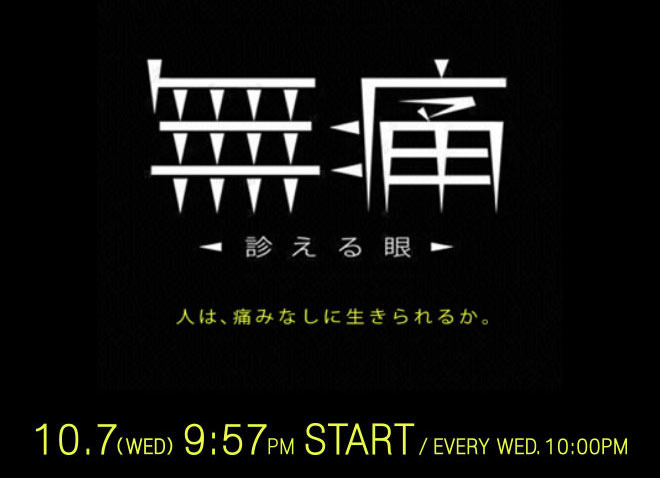 Story
Tameyori Eisuke is a dedicated general practitioner who runs a small clinic, which seems on the verge of collapse, in one corner of a provincial town. He seems to be a middle-aged man who will never get ahead, but in fact possesses an astonishing ability to see a person’s health and prognosis just by judging the person from appearance. Although this seems to be a remarkable ability, Tameyori knows there are incurable patients. The death of his wife made him feel the limitations of medical treatment and anguish. Because of this, Tameyori has withdrawn from the frontline of the medical community, which in his opinion, provides ineffectual medical treatment. His observant eyes are not only able to detect illnesses, but also the criminogenic nature characteristic of criminals. One day, Tameyori recognises such indications in a man he passed by right after parting ways with his sister-in-law Inoue Kazue, who is a nurse at his clinic. Confirming that the man is headed in the direction that Kazue had gone, Tameyori reports the matter to the police and follows them. He notifies Kazue of the danger and when he is leading the neighbourhood people to a safe place, the man goes on a rampage, slashing people on a shopping street. Tameyori quickly begins to give the injured medical attention. Then detective Hayase Junichiro, who had received the report, arrives, shoots the man and arrests him. The injured are brought to the hospital that Shiragami Yoji runs. Hearing what happened at the scene from the ambulance crew, Shiragami takes an interest in Tameyori. He begins operating on the injured, but for some reason, even the cleaner Ibara is allowed to watch the surgeries … On the other hand, Hayase learns from his enquiries at the scene that Tameyori’s report was before the incident took place. He is intrigued by how Tameyori could have known that the case would happen. Because of that, Hayase becomes dependent on Tameyori. Despite his initial reluctance, Tameyori starts to help in solving cases because of his kind personality and inability to refuse when asked.

Characters
Nishijima Hidetoshi as Tameyori Eisuke
A visual examination genius who sees through the name of an illness and the rate of progression from slight external symptoms that appear. These eyes can even spot the criminogenic nature which appears in criminals. He is curt and seems to have no interest in people, but his nature is such that he finds it hard to refuse when counted on and will end up helping. After graduating from university, he worked for a university hospital. Feeling disgusted at the doctors’ many egoistic, futile medical examinations, it was his own wish to work at a prison and he served as a medical officer. He opened his clinic three years ago. He is with his patients until their last moments and provide medical care for their sakes, but since his wife’s death from cancer, he feels in his heart that patients who cannot be helped will not be saved no matter how dedicated the medical attention is. He is indifferent about his own personal appearance and health, and is a heavy alcohol drinker.

Ito Atsushi as Hayase Junichiro
A police sergeant with a police precinct’s criminal affairs division. He has a stonger sense of justice than others and tenaciously investigates cases from his own point of view. Contrary to his appearance, he has a black belt in judo. He learns about Tameyori Eisuke’s ability to identify criminals and proposes that Tameyori participate in investigations to prevent crime from happening. He set his sights on being a director of the Tokyo Metropolitan Police Department and had a promising future. However, several years ago, even though he tracked down and arrested the real criminal of a murder case that he had been pursuing for a long time, the criminal was judged mentally unsound on the day the crime was committed and found innocent based on Article 39 of the penal code. This was unbearable for him. He ended up grabbing at the psychiatric expert who made the diagnosis and was subsequently demoted to a police precinct.

Ishibashi Anna as Takashima Namiko
A clinical psychologist who works part-time at Shiragami Medical Centre. She is in charge of counselling Minami Satomi who came forward as the criminal of a brutal family murder. She took classes with Tameyori Eisuke when he worked at the university hospital, and had felt a one-sided attraction. A case that Tameyori leads to their reunion again. She believes that even the heart of a patient’s illness will be improved if the environment changes, and disagrees with Tameyori’s thinking that “patients destined to die, are destined to die no matter what is done”. In truth, her ex-huband died in some case and she has special feelings for the crime because of the circumstances with the perpetrator at that time.

Ito Hideaki as Shiragami Yoji
The director of Shiragami Medical Centre. His surgery techniques have been hailed the “hands of god”. By bringing in the most advanced equipment and treatments, and improving the work environment, he substantially raising the reputation of the hospital and has established himself as the “revolutionary of the medical profession”. Born into a family which has been doctors for generations, he grew the hospital that he had inherited from his father into a huge hospital in one generation. But with the same eyes as Tameyori Eisuke, he has dramatically improved the recovery rate at his hospital by immediately making patients with poor prognoses transfer to different hospitals. He has serious misgivings about Japan’s present healthcare system and actively appears in the media with the resolve to personally attempt reform.

Nakamura Aoi as Ibara
A cleaner who works for Shiragami Medical Centre. He suffers from a congenital insensitivity to pain and naturally does not feel pain and understand the concept of pain. He had a mild intellectual disability in the past, but his intelligence has increase because of Shiragami Yoji’s medical treatment, and he is now able to perform routine work. After the medical treatment, he idolises Shiragami and obeys every word. He is smitten with his colleague, Takashima Namiko, the clinical psychologist.

Original Work
Mutsuu by Kusakabe Yo

Episodes
#1: Birth of a New Hero …?! A Genius who Sees Through Illnesses Can Recognise Crime?
#2: A Man with the Same Ability Approaches the Genius
#3: The Hot-Blooded Detective’s Murderous Secret
#4: The Female Instincts that the Genius Perceived
#5: A Blonde-haired Girl’s Memories of Murder
#6: The Eye that Cannot See
#7: A Criminal’s Death … Reason for a New Murder
#8: The Real Criminal’s Loneliness
#9: A Righteous Murder
#10: Pain is …

This blog contains information and musings on current and upcoming Japanese dramas but is not intended to be comprehensive.
View all posts by jadefrost →
This entry was posted in Fall 2015 Dramas, Fuji TV and tagged Ito Hideaki, Mutsuu, Nishijima Hidetoshi. Bookmark the permalink.