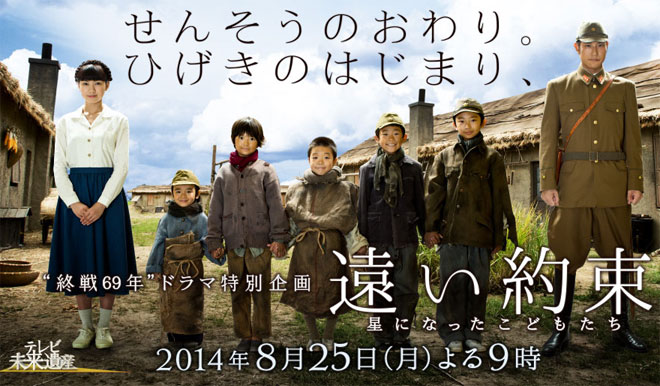 Date: From 9.00 p.m., 25 August 2014
Cast: Matsuyama Kenichi, Nikaido Fumi, Kato Seishiro, Yamada Mochika, Takazawa Fubomichi, Mori Haruya, Igarashi Hinata, Fukada Kyoko, Ito Kazue, Mitsushima Shinnosuke, Emoto Tokio, Maeda Gin, Sasano Takashi, Takarada Akira (guest star), Shiina Kippei (guest star)
Synopsis: In July 1945, the war condition deteriorates beyond measure. Even civilians who were told that they would not be picked by the military if they joined settlement groups are drafted into the army. Many women as well as children are left in these groups. In a change of course, the Japanese army is made to move its line of defence southward. But it does not let the settlers know what is happening out of fear that the Soviet Union would learn of its strategy should the settlers start to evacuate together. On 9 August, the same day that atomic bombs are dropped on Hiroshima and then Nagasaki, Soviet troops cross the border and start to invade Manchuria. The settlers are forced to seek refuge. While Toda Eiichi (Matsuyama Kenichi) and other soldiers are desperately fighting against the Soviet army, Mizuno Yukiko (Nikaido Fumi) of the Shizuoka Village settlement group in Sanjiang Province, her mother Arie (Ito Kazue), younger brother Masaru (Ninomiya Hikaru) and younger sister Kayo (Yazaki Yusa) rush to the train station with just the clothes on their back. On the way, Yukiko meets her student (Kato Seishiro) Satake Saburo again. His mother has already died in a bombing and his father has been conscripted into the army. Saburo, who is all alone, travels with Yukiko and her family. However, the train passes in front of the settlers and leaves them behind. They have no choice but to walk approximately 600 km to the Manchurian capital of Xinjing, but the way there is fraught with continuous hardship. The Japanese are attacked by locals called bandits, and assaulted by Soviet troops. Many lose their lives along the way. On 15 August, the war ends. Although war comes to an end for Japan, it rages further in Manchuria. There is a bombing and when Eiichi regains consciousness along with a sharp pain in his left arm, there is no one nearby. After that, he goes through a lot to reach the Kanto military headquarters in Xinjing. However, that is after the Kanto army has left and he learns for the first time that Japan has lost. He wanders the streets of Xinjing and gets punched and kicked by Manchurians. When he wakes up again, he is in an elementary school building in the Japanese concession in the centre of Xinjing. What will be the end for the Japanese people who came over to Manchuria with dreams and aspirations of obtaining land and a life of abundance? Buried in history, these Japanese people who tried hard to live in the painful period after the defeat in the war are brought back to life.
Official Website: www.tbs.co.jp/to-i_yakusoku

This blog contains information and musings on current and upcoming Japanese dramas but is not intended to be comprehensive.
View all posts by jadefrost →
This entry was posted in Summer 2014 Drama Specials, TBS/MBS and tagged Matsuyama Kenichi, Nikaido Fumi, Shiina Kippei, Tooi Yakusoku. Bookmark the permalink.