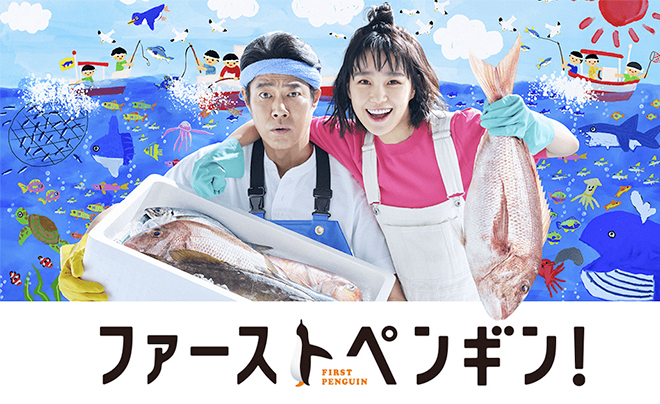 Synopsis
Iwasaki Nodoka has no house, money or job. The single mother has just moved to the desolate port town of Shiogasaki with her 5-year-old son Susumu. At her wits end, she considers doing anything to be able to eat. One day while working as a waitress at a local hotel, Nodoka meets Kataoka Hiroshi, a fisherman, at the 70th birthday party for Sugiura Hisamitsu, the head of the fisheries cooperative. As the boss of the fishing fleet, Sanshi Sendanmaru, which he set up with his two childhood friends Isoda Takashi and Yamanaka Atsushi, Kataoka privately worries about the plight of the port. The fishermen are ageing and their catch has been declining by the day. He hopes to bring back the bustle of the past but without no plan to fix the situation, he feels a growing sense of crisis about their future. Impressed by Nodoka’s resourcefulness and work ethic, Kataoka appeals to her to help revive the port town’s fishing fleet. This is how Nodoka ends up plunging into the unknown world of the fishing industry despite being unable to tell the difference between mackerel and Japanese horse mackerel. She jointly shoulders the dreams of fishermen struggling to live in this corner of the country. Even though these stubborn men and Nodoka clash, she is able to break through old conventions and habits with the boldness of a novice and trigger a revolution in a world of constraints through her suggestion of a direct sales business to deliver fresh fish from the fishermen to customers nationwide.

Characters
Nao as Iwasaki Nodoka
A single mother who has just moved to Shiogasaki with her young son. Although living in an unfamiliar place is difficult, this experience has toughened her up. Her quick thinking is recognised by the fisherman Kataoka Hiroshi who beseeches her to help turnaround his fishing fleet. She thus plunges into the unknown world of the fishing industry. But her proposal to directly sell fish causes an uproar.

Tsutsumi Shinichi as Kataoka Hiroshi
The president of the fishing fleet Sanshi Sendanmaru who followed in his father’s footsteps to become a fisherman. He has been a widower after his wife Miyako died of an illness. Straightforward and compassionate by nature, he has the qualities of a leader that people can rely on. But he can also be hard to handle. He constantly shows off and has the habit of trying to act like a man should be like this. As a result, he is not able to back down so he gets cranky and loses his temper. In fact, he is a sensitive man who finds it difficult to apologise.

Suzuki Nobuyuki as Nagasawa Kazuki
A young fisherman belonging to Sanshi Sendanmaru. He moved from Tokyo to Shiogasaki several years ago and joined the fleet as a crew member. While he is not good with words and quiet, he observes his surroundings closely and notices even the slightest things. He is appreciated by the senior fishermen for silently handling the nets which everyone finds troublesome, and helping out with everything without pulling a face. He casually gives a hand to Iwasaki Nodoka who finds herself at the mercy of the fishermen. At this point, he is unable to tell whether he is doing so because of his habit of helping people or his personal feelings … …

Watanabe Daichi as Kotohira Yusuke
A man who lives in Tokyo and created the opportunity for Iwasaki Nodoka to move to Shiogasaki. He is mild-mannered and also soft-spoken but there is something mysterious about him. Nodoka addresses him as “sensei”, relies on him and often consults him over the phone. He seems to care about her and her son but what is on his mind? He actually has a secret … …

Matsumoto Wakana as Mizoguchi Shizuka
An employee of the Ministry of Agriculture, Forestry and Fisheries. She is in charge of the government’s sixth industrialisation project for the agriculture, forestry and fishing industries. She has a cool appearance and gives the impression that she is difficult to approach but she gives Iwasaki Nodoka support from behind the scenes in her lonely fight in the male-dominated fishing industry. She feels a sense of crisis about the country’s fishing industry’s current situation where the amount of fish caught is on the decline.

First Summer Uika as Shigemori Rinka
A middleman who has access to Shiogasaki fishing port’s fish market. She usually auctions off fish that has been unloaded at the port, selling them wholesale to retailers and restaurants. Despite her foul mouth, she secretly helps out Iwasaki Nodoka who has been marked by the fisheries cooperative. She gives Nodoka, who does not know the difference between mackerel and Japanese horse mackerel, lectures on the basics of how to handle fish.

Umezawa Tomio as Sugiura Hisamitsu
The president of the Shiogasaki Fisheries Cooperative. He controls not only the fishing industry but also the entire local community with a uniquely intimidating air. He was originally an outstanding fisherman and is someone whom Kataoka and the other fishermen are no match for. He loathes change and reforms, and while he is aware of the dire situation, he has taken a devil may care attitude. He regards Iwasaki Nodoka, who proposed the direct sale of fish, as a thorn in his side and always keeps close tabs on her. He stands in her way many times and plots all sorts of sabotage. Contrary to his intimidating appearance, he is skillful with his hands and good at detailed work. His hobby is making dioramas.

This blog contains information and musings on current and upcoming Japanese dramas but is not intended to be comprehensive.
View all posts by jadefrost →
This entry was posted in Fall 2022 Dramas, NTV and tagged First Penguin, Fukikoshi Mitsuru, Kajihara Zen, Nao, Tsutsumi Shinichi. Bookmark the permalink.