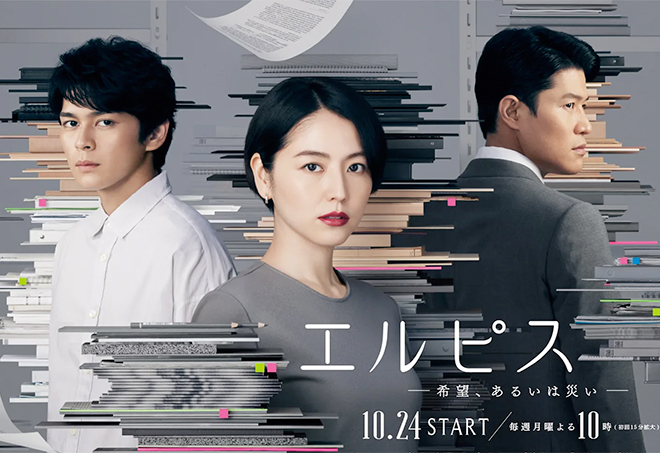 Synopsis
Asakawa Ena, a TV presenter with Taiyo Television, aspires to report the news and is a subcaster for the prime-time news programme. Despite her popularity and competency, she is dropped from the programme after being caught kissing someone on the street by a weekly magazine. She is currently the host of a segment of Friday Bonbon, a late-night informational programme that is mocked in-house as the graveyard for producers. One day, a young rookie director Kishimoto Takuro, who is in charge of the entertainment news on Friday Bonbon, intercepts Ena to consult her about the possibility that a man on death row for the serial murder of teenage girls was wrongly convicted. For some reason, he bows his head to ask for her help in going after the truth even though she wants no part in reporting much less a case involving the miscarriage of justice. Takuro is hell-bent on it because he obtained this information from a strong source. However, Ena cannot believe him since she had reported about this case. Furthermore, it took place close to 10 years ago so the man’s death sentence has already been determined. Ena flatly refuses to dig up the case. Even so Takuro is not discouraged. He turns to ace reporter Saito Shoichi from the news bureau and innocently invites Ena to go with him to hear the story at the time of the murders. As she pursues the truth with Takuro and Saito, they find hope. But trouble also befalls the trio, the people around them and the organisation that they belong to. What lies beyond the chaos that they brought about by opening Pandora’s box?

Characters
Nagasawa Masami as Asakawa Ena
A TV presenter with Taiyo Television. She used to be a leading presenter but was replaced on the prime-time news programme due to a scandal where she was photographed kissing someone on the street. She now hosts a segment of Friday Bonbon. After Kishimoto Takuro approaches her about a case of wrongful conviction, they decide to get to the bottom of the truth together. As she pursues the case, she begins to rediscover her own values which she had lost.

Maeda Gordon as Kishimoto Takuro
A rookie director with Taiyo Television who is in charge of Friday Bonbon’s entertainment news. He leads a good life as the son of parents who are lawyers and automatically got into a well-known private university after high school without an entrance exam. He joined Taiyo Television through his job search. He has high self-esteem and carefree personality, cannot read situations and likes to do as he pleases. People have a low opinion of his ability as a director.

Suzuki Ryohei as Saito Shoichi
An ace reporter from Taiyo Television’s news bureau. He was in charge of mentoring Kishimoto Takuro when he was a new employee. He covers news from the prime minister’s official residence and is friendly with key figures in the inner circle of government. He is good to work for and gives Asakawa Ena and Takuro counsel regarding the miscarriage of justice in a serial murder case.

This blog contains information and musings on current and upcoming Japanese dramas but is not intended to be comprehensive.
View all posts by jadefrost →
This entry was posted in Fall 2022 Dramas, Fuji TV and tagged Elpis, Nagasawa Masami, Suzuki Ryohei. Bookmark the permalink.