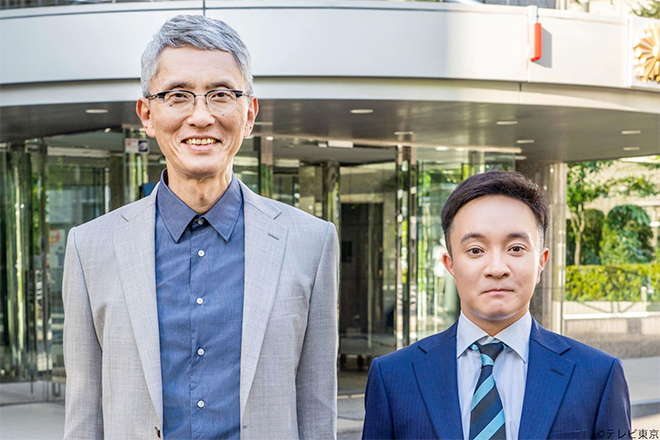 Date: From 8.00 p.m., 12 September 2022
Genre: Detective
Scriptwriter: Ozaki Masaya (Signal, Chinmoku Houtei, Kekkon Dekinai Otoko Series)
Director: Matsumoto Kana
Cast: Matsushige Yutaka, Hamada Gaku, Kaho, Sakoda Takaya, Mizuma Long, Mizuishi Atom, Yoshizawa Hisashi, Hasegawa Tomoharu, Yamanaka So, Konishi Sakurako, Hashimoto Jun, Aijima Kazuyuki, Mitsuishi Ken
Synopsis: Takagi Akira (Yamanaka So), an IT company CEO, is found dead in his office. The cause of death is said to be a drug overdose for a pre-existing condition. However, the possibility of murder emerges due to the presence of potassium in the medication. Ogawa Mitsuru (Hamada Gaku), Maruyama Keiko (Kaho) and Yamane Shigeyuki (Hashimoto Jun) from the Criminal Affairs Division set out to investigate his death. Okawa Yuji (Matsushige Yutaka) from the Police Affairs Division which is in charge of administrative work for the police, shows up at the busy Criminal Affairs Division. He urges changes in work practices despite being unwelcome by the detectives. His attention is draw to a photo of stackable dolls that was found at the murder scene. Those eyes are just like the look of a detective. In fact, he was an outstanding detective but came to prioritise life with his children after his wife died from an illness. Having just transferred to the Criminal Affairs Division, Ogawa the rookie is unaccustomed to investigations and seeks Okawa’s assistance. Okawa refuses since he is no longer a detective. But Ogawa’s persistence in consulting him, makes Okawa start to care about the direction of the case. This odd duo team up to uncover the truth.
Official Website: www.tv-tokyo.co.jp/premiere8_drama

This blog contains information and musings on current and upcoming Japanese dramas but is not intended to be comprehensive.
View all posts by jadefrost →
This entry was posted in Summer 2022 Drama Specials, TV Tokyo and tagged Hamada Gaku, itsuishi Ken, Kaho, Matsushige Yutaka, Okawa to Ogawa no Jitan Sousa, Ozaki Masaya. Bookmark the permalink.