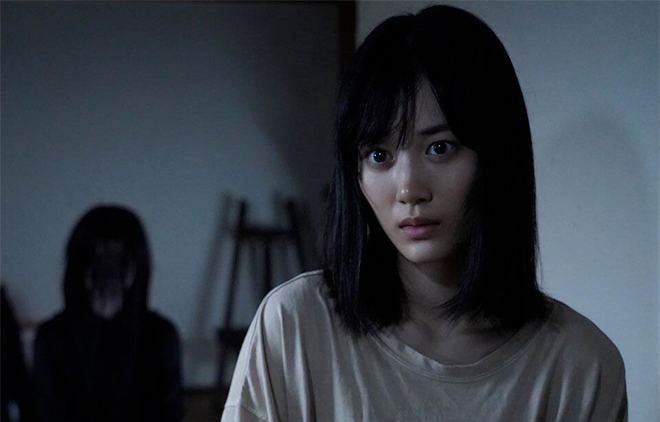 Hijou Tsuhou
Story: Takahashi Ryota (Kamio Fuju), a new security guard working for a security company, is doing the night shift with a senior colleague Nishida Tetsushi when an emergency call comes in from a centre for seniors in their jurisdiction. Ryota nervously heads to the location and finds a resident Yamauchi Kazushige is in pain. He immediately calls for an ambulance but it is too late to save Yamauchi, and he laments that he did not arrive at the centre a little earlier. One day. Ryota is out on a date with his girlfriend Kisaragi Misa (Otomo Karen) when Misa gets a call from her mother Ikue (Tanaka Misako), urging her to go home even though it is evening. Ryota takes it out on Misa. They get into a quarrel and Misa starts to walk off but he senses something strange about her behaviour. Misa suddenly moans as if she has been possessed. A panicky Ryota sees Yamauchi in his line of sight. Misa sustains a serious injury and has to be hospitalised. After this incident, Yamauchi appears before Ryota at various times and he is continuously plagued by strange phenomenon. On one occasion, Ryota receives a message on his smartphone from Misa asking for help.
Cast: Kamio Fuju, Otomo Karen, Chihara Seiji, Tanaka Misako

Shazai
Story: Fukumoto Kosei (Iwata Takanori) fails to secure a contract at work and gets transferred to a local branch office. The apartment buildling he moves into is dimly-lit even in the daytime and it has a disquieting atmosphere. After receiving the key from the building’s caretaker (Kajihara Zen), Kosei hears a knock on the front door while he is unpacking in the apartment. When he looks at the clock, it shows that the time is 7 pm. Kosei is suspicious of this visitor on the first day of his move. However, the knocking sound persists, and then he hears a woman’s voice say, “Hey, open the door.” Kosei cautiously goes to the front door to check but no one is there. The next day, Kosei is once again bothered by the sound of knocking and the woman’s voice. He can even hear crying. The following morning when he goes to discuss what has happened to him with the caretaker, the man stammers that she is probably the girlfriend of the man who used to live in this apartment. But in fact, this woman is no longer of this world.
Cast: Iwata Takanori, Kajihara Zen

Hitokoto no Ayamachi
Story: Ogino Aina (Yamashita Mizuki) attends boarding school and lives with her good friends Tachibana Momoka (Ono Karin) and Endo Yui (Sasaki Arisa) in a girls dorm. However, this dorm has been a famous place for a lot of supernatural phenomenon for quite a while. Aina hears rumours about this phenomenon from Yui and Momoka almost every time but there is one more thing that weighs on her mind. One day, she stopped talking to Koyama Chihiro (Suzuki Yuka), whom she was on good terms with when she first got into the school. Deep down, she frets that Chihiro will not make eye contact with her even if they pass each other in the dorm. Then she finds out that Momoka has been in love with the ace of the basketball team, Saito Fumiya, for some time. Aina advises Momoka, who is hesitant to confess her feelings, to go for broke. These words give Momoka the courage to declare her feelings but fails miserably. Aina and Yui hold a party to cheer her up. When Aina returns to her room that night, she feels something hit her cheek. Even after that, she continues to be troubled by the same sensation over and over again. At some point, she starts hearing a mysterious voice. Aina notices that Chihiro is always nearby while this supernatural phenomenon is happening so she decides to talk to her but … …
Cast: Yamashita Mizuki, Ono Karin, Suzuki Yuka, Sasaki Arisa

Tsukete Kuru
Story: Takagi Reni (Takagi Reni), a member of the popular idol group Momoiro Clover Z, has a worry. She actually has had a stronger ability to sense the supernatural since long ago, and when she stays at hotels around the country while on group tours, she is stricken by temporary paralysis and other paranormal phenomenon. One day, Takagi decides to consult the other members about the strange experiences that she goes through day after day. However, the paralysis is dismissed as a common thing by Momota Kanako (Momota Kanako) who thinks it is because she is exhausted. Then the hands of the clock on the wall in their room starts moving at unbelievable speed and everyone is at a loss for words at the sudden bizarre phenomenon. The time that the hands of the clock stopped at is the exact time that Takagi had a frightening experience the night before. She experiences such terror daily but there is something that is a greater concern besides the temporary paralysis. When she is doing something such as an interview or wrapping up a concert, she keeps feeling someone’s eyes on her and also the sensation that someone is haunting her … …
Cast: Takagi Reni, Momota Kanako, Tamai Shiori,

This blog contains information and musings on current and upcoming Japanese dramas but is not intended to be comprehensive.
View all posts by jadefrost →
This entry was posted in NHK, Summer 2022 Drama Specials and tagged Honto ni Atta Kowai Hanashi Series. Bookmark the permalink.