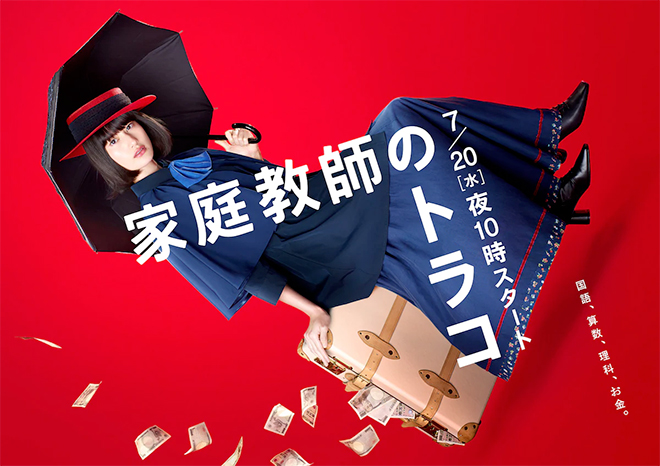 Synopsis
Anxious about the future of her only daughter Chie, newspaper journalist Nakamura Maki is desperate to get the 6-year-old girl accepted into a famous private elementary school by some means or other. But her husband Sakutaro’s uncooperative attitude simply frustrates her. Then Maki receives an email with the message “100% acceptance rate for any school of your choice! You decide the tuition fees!” The sender is the legendary private tutor Nezu Torako. A high school graduate with an interest in cosplay, she is unfriendly and leaves all communication with the parents to her secretary Fukuda Fukuta who is a Tokyo University graduate. However, Torako will make sure every student qualifies for their first choice. There are three conditions to take her lessons: 1) do not interfere in what she teaches, 2) do not peek into the room in the middle of a lesson and 3) she stays at the house on the day of the lesson. Despite her doubts, Maki seals the deal. Two other mothers Uehara Satomi and Shimoyama Tomoyo also hire Torako. What these mothers of different ages and standards of living have in common is the ardent wish for their children to qualify for the schools of their choice. Torako changes her appearance to match the three children she is teaching. Each of them have serious problems that they cannot tell their parents. On the first day of lessons, she comes to Maki’s house dressed like Mary Poppins and takes the 10,000 yen tuition fee from her. Torako’s question to the children is “What would you like to know?” She never preaches or say difficult things. She merely teaches the mothers and their children something more important than studying – the right way to use money. This gives the children a sense of what they want to pursue and inspires the mothers to find a new life that is suitable for their family.

Characters
Hashimoto Ai as Nezu Torako
A home tutor who changes her appearance to match the children of the three families that she is currently teaching. She hates seeing money spent unnecessarily and she has great ambitions. That is why she takes private tutoring jobs for the children of influential people to build connections and save up money. It is rumoured that there is a lot of money packed in the bag she always carries with her. She stays overnight at her student’s house on lesson days and when she returns to Fukuda Fukuta’s apartment once a week, she changes into a sweatsuit and reads whatever genre of books she can lay her hands on. She treats her students as equals but is exceptionally harsh to the mothers for some reason. Like a daughter rebelling against her mother … …

Nakamura Aoi as Fukuda Fukuta
Nezu Torako’s childhood friend who grew up together with her in an orphanage. A graduate of Tokyo University. He is always mistaken by parents at first because he looks the part of competent home tutor with his silver-rimmed spectacles and suit. He takes care of Torako whenever she casually comes back to his apartment, supports her work and typically has one-way conversations with her since she does not give proper replies. He has not figured out whether he has feelings for Torako … …

Mimura Rie as Nakamura Maki
A journalist of a financial publication who graduated from Meiji University. She and her husband Sakutaro, who is in charge of product development at a small toy manufacturer, are a middle income family and live in a ready-built house. She has a sense of justice that has resulted in her snapping at her bosses. Anxious about the future of her 6-year-old daughter Chie, she goes to great pains to get the girl into a very well-known private elementary school. She is a worrier who cares too much about the future rather than the present and has a habit of stocking everything. She believes she is the one supporting the family.

Itaya Yuka as Shimoyama Tomoyo
A divorcee who lives with her 12-year-old son Takashi. She is not a person who worries about details. Because she runs a small eatery on her own, she is busy with daily life. Although her son is most important to her, she does not realise that he wants to go to a private junior high school that is very hard to get into rather than a local high school. Can she give up the eatery that her parents left behind and reclaim her own dream?

Suzuki Honami as Uehara Satomi
A second wife who feels that she does not fit in even though she married into the ranks of the wealthiest 3% of society. When she was a hostess, she became the mistress of Uehara Toshiaki, a banker who was married with two children. She gave birth to a son Mamoru and raised him on her own. Even though she is now the legal wife after the first wife passed away and they live as a family of five in a sprawling mansion, she is weary of feeling out of place and wants Mamoru to qualify for Tokyo University and show that they are superior. A native of Tsugaru, her accent comes out when she gets angry.

Kato Yuzuna as Nakamura Chie
A cheerful, pure and innocent girl who loves her parents. Even in kindergarten, she has something about her that draws attention. She is about to take the exam for a very well-known private elementary school and her first question to Nezu Torako is, “Why do I have to take the exam?”

Akutsu Keito as Shimoyama Takashi
A sixth grade student who attends a local public elementary school. He is a son that Shimoyama Tomoyo can be proud of. He has outstanding results and takes the initiative to help out at her eatery. He is actually being bullied in school and gets shaken down for money every day. He wants to get into a private junior high school to break free from the bullying. Because he thinks of his mother, he cannot bring himself to tell her.

Hosoda Kanata as Uehara Mamoru
A third-year high school student who seems to have a bright and cheerful personality. He is attached to his older step siblings but gets ignored by them. His results are average and he also has trouble fitting in at school. But he secretly has a dream other than taking the exam. However, when it comes to his future, he dodges it with flippant laughter and excuses.

This blog contains information and musings on current and upcoming Japanese dramas but is not intended to be comprehensive.
View all posts by jadefrost →
This entry was posted in NTV, Summer 2022 Dramas and tagged Hashimoto Ai, Itaya Yuka, Kateikyoushi no Torako, Mimura Rie, Nakamura Aoi, Yukawa Kazuhiko. Bookmark the permalink.