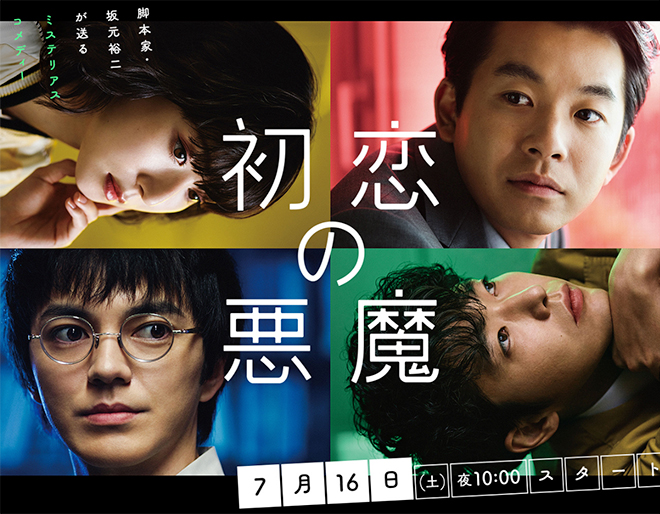 Synopsis
A youth who has stayed in hospital for a long time is found dead in the hospital’s courtyard. It is believed that he jumped to his death. But when questioned about the incident, another youth named Daiki who shared the same ward as Arata, gives a statement that Arata was killed by the doctor in charge, Dojima. After that, Daiki’s condition worsens and he becomes critically ill. This raises the possibility that Arata’s death was murder. Mabuchi Haruhi from Sakaigawa Police Precinct’s General Affairs Division is ordered by the police chief Yukimatsu Naruhito to monitor detective Shikahama Suzunosuke who has been suspended for committing a blunder. Haruhi’s elder brother Asahi was a detective but died in an accident during an investigation. Now Yukimatsu tells him that Suzunosuke may have been involved in his death. Taken aback by this unexpected order, Haruhi decides to visit Suzunosuke under the guise of a survey that is being conducted within the precinct. He listens to Suzunosuke, who is a fan of the mystery genre, talk passionately about bizarre crimes that have been committed in the world. Around this time, Kotori Ruka from the Accounting Division asks Haruhi for a favour. He wants him to find out the truth behind the hospital incident in order to help Hattori Nagisa, a rookie detective that he secretly likes who is being treated as useless within the Criminal Affairs Division. Haruhi tries to refuse but remembers Suzunosuke and brings Ruka to visit him. As Haruhi had expected, Suzunosuke is very interested in the likelihood that the doctor could be a serial killer after hearing an overview of the case. When Haruhi and Ruka break into the administrative office that manages investigation materials, Tsumiki Sesuna from the Community Safety Division is there for some reason. They assume that she is also investigating the same case and seek her assistance. Thus the four of them who have no investigation authority set out to solve the case, and stir up an unforeseen situation.

Characters
Hayashi Kento as Shikahama Suzunosuke
A detective who is currently suspended due to blunder he made. He lives alone in a large Western-style house for some reason. As a fan of the mystery genre, he has a thing for violent crimes. He gleefully keeps an eye on his neighbour Morizono Masumi who behaves suspiciously and queerly. Even though he is suspended, he ends up making deductions for the Criminal Affairs Division’s case together with Mabuchi Haruhi, Tsumiki Sesuna and Kotori Ruka.

Nakano Taiga as Mabuchi Haruhi
A staff of the General Affairs Division, an obscure department that is in charge of routine tasks from distributing traffic safety posters to replenishing paper for the photocopying machines. His motto is “Because I’ve given in, other people have won in life”. He lost his outstanding older brother who was a detective. He gets close to Shikahama Suzunosuke at the orders of his police chief Yukimatsu Naruhito but … …

Matsuoka Mayu as Tsumiki Sesuna
A detective who is in charge of shoplifters at the Community Safety Division. She used to belong to the prefectural police’s First Investigation Division and bravely tackled brutal crime. This may be the reason she always wears an embroidered satin bomber jacket and her words are rough and blunt. However, that is not who she truly is … …

Emoto Tasuku as Kotori Ruka
He works in the Accounting Division and is extremely meticulous and inflexible. He is also very strict with detectives’ calculations. On the other hand, he has the habit of daydreaming and is slightly shunned within the precinct for frequently preaching his theories and opinions. It is around this time that he develops feelings for Hattori Nagisa who is always willing listen earnestly and sympathetically to what he says.

Ito Hideaki as Yukimatsu Naruhito
The chief of Sakaigawa Police Precinct. He looks as if he is comfortable with anyone and affably interacts with staff at the precinct. What is his true objective for making Mabuchi Haruhi monitor Shikahama Suzunosuke? As the story progresses, an unexpected side to him as well as his past are revealed.

Yasuda Ken as Morizono Masumi
A self-proclaimed novelist and a man of many mysteries. He behaves strangely and looks suspicious at home but acts extremely courteous outside. A curious Shikahama Suzunosuke has been monitoring him through the window, wondering when he would commit a terrible crime.

Tanaka Yuko as Koarai Azuki
A doctor in private practice at an old and small hospital and a former medical examiner at Sakaigawa Police Precinct. She has been acquainted with Tsumiki Sesuna since then and cares about her in many ways. She also offers sound advice based on medical knowledge to Sesuna and the rest on their investigation.

This blog contains information and musings on current and upcoming Japanese dramas but is not intended to be comprehensive.
View all posts by jadefrost →
This entry was posted in NTV, Summer 2022 Dramas and tagged Emoto Tasuku, Hatsukoi no Akuma, Hayashi Kento, Ito Hideaki, Sakamoto Yuji, Tanaka Yuko, Yasuda Ken. Bookmark the permalink.