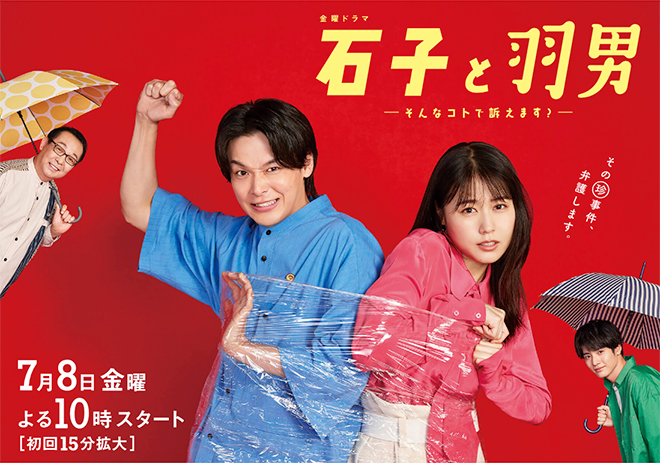 Synopsis
Called Ishiko because she is obstinate, 28-year-old Ishida Shoko graduated at the top of her class at Tokyo University’s law faculty but failed the bar exam four times. Although she tells the people around her that it is not that she cannot become a lawyer but that she ought not to, Ishiko gave up on the bar exam out of fear that she would fail again. She has been working as a paralegal at her father Ushio Wataro’s law firm. One day, a lawyer named Haneoka Yoshio comes to be Wataro’s representative after the latter strained his back. Haneo’s tough talk and peculiar energy when dealing with clients makes Ishiko worry that they will be sued by clients. Just when she thinks that they will never meet again, she learns that Haneo has been employed by the firm on her father’s command. A high school graduate who dropped out of university in the US after six months and spent several years wandering around the country, Haneo passed the bar exam on his first try thanks to his photographic memory. While he brands himself an unconventional genius lawyer, he actually lacks the ability to respond to situations and his train of thought grinds to a halt when the unexpected happens. The first client seeking consultation is Oba Ao who has been accused of charging his smart phone at a cafe. Thrown together with their inferiority complexes, Ishiko and Haneo’s personalities collide and they constantly bickering as they fight for their clients’ rights.

Characters
Arimura Kasumi as Ishida Shoko
A paralegal who has been called Ishiko since her student days for her obstinacy. She graduated at the top of her class at Tokyo University’s law faculty but failed the bar exam four times. Fearful that she would fail again on her fifth try, she gave up on taking the bar exam and has been working at her father Wataro’s law firm. She lives with her father and is thrifty person who does not tolerate waste.

Nakamura Tomoya as Haneoka Yoshio
A lawyer who is a high school graduate. After his graduation, he went to a university in the US but dropped out after six months. After that, he spent several years wandering around the country. He passed the bar exam on his first try due to his photographic memory. He is primarily concerned about “branding” – how he would be perceived by people – and is taken with the “unconventional genius lawyer”.

Akaso Eiji as Oba Ao
He works part time at Ushio Wataro’s law firm. Ishida Shoko’s junior back in high school, he belonged to the kendo club and excelled in it for three years. Despite being serious, awkward and boring, he is straightforward, has a kind heart and wants to help when he sees people in trouble. He comes to the law firm with the request for them to take on his case after he is accused of charging his smartphone in a cafe. That brought to light the abuse of authority, bullying and unfair transfer that he went through at the used car dealership where he worked. He resigns from the company and begins working at her father’s law firm until he finds his next job.

Megumi as Haneoka Yuno
Haneoka Yoshio’s elder sister. A prosecutor who is expected to be the Tokyo District Public Prosecutors Office’s young ace. She has a strong sense of justice, and is dependable and good with people.

Issey Ogata as Haneoka Taisuke
Haneoka Yoshio’s father. A judge. He is the central figure in the family and has a unique aura. He firmly believes all his beloved family members are excellent and feels happy that they celebrate his birthday every year.

Sada Masashi as Ushio Wataro
Ishida Shoko’s father. A lawyer and the boss of his own law firm. He is a genuinely good-natured and compassionate man who cannot ignore people in need. The firm’s business is always in the red because he takes on problems where there is not much money to be made. He is sternly warned by his daughter to do it in moderation. He is a friendly person who can make friends with anyone, young and old.

This blog contains information and musings on current and upcoming Japanese dramas but is not intended to be comprehensive.
View all posts by jadefrost →
This entry was posted in Summer 2022 Dramas, TBS/MBS and tagged Arimura Kasumi, Ishiko to Haneo, Nakamura Tomoya. Bookmark the permalink.