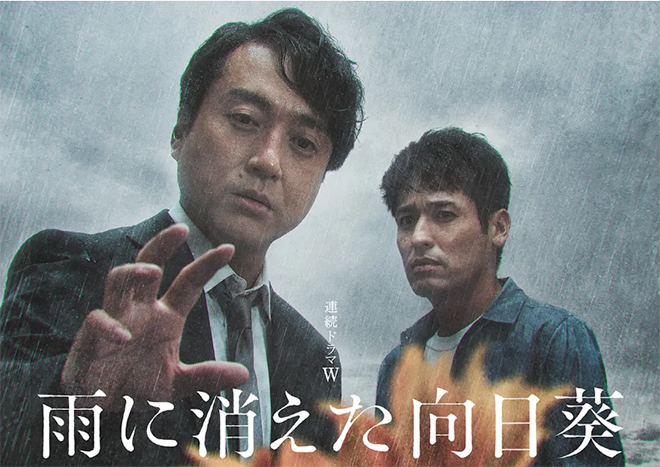 Synopsis
One day during a heavy downpour, Ishioka Aoi, a fifth grade elementary school student, vanishes all of a sudden along a road with rice fields where sunflowers bloomed. All she left behind was an umbrella. Assistant Inspector Nara Kenichi from the Saitama Prefectural Police’s First Investigation Division rushes over to the scene after receiving a report on her disappearance. Aoi’s father Yukinori is there participating in the search operation. He and his wife Akina are in the middle of a divorce settlement and he had been living separately from them. However, he came over once he received word. Could Aoi have disappeared because she was kidnapped, involved in an accident or ran away from home because her parents are not on good terms? The police run into difficulty investigating the case. In the face of the Ishiokas’ heartbreak, Nara is reminded of his own younger sister Mayuko. Mayuko built an emotional wall after she was attacked by a thug and this episode spurred Nara to become a detective. Regretting his inability to protect her and motivated by a strong sense of mission, he wants to find Aoi at all costs while her family continues to pray for her safety. Amid conflicting information, speculation flying about and the family’s frustration, Nara closes on the truth through persistent investigation.

Characters
Muro Tsuyoshi as Nara Kenichi
An assistant inspector from the Saitama Prefectural Police’s First Investigation Division. He is composed and dedicated to his work. While his superiors and colleagues have strong faith in him, he does not let other people see his inner thoughts. He is in charge of Ishioka Aoi’s case and tenaciously pursues the truth.

Sato Ryuta as Ishioka Yukinori
The father of the missing Ishioka Aoi. He works for a bank in Tokyo. He and his wife Akina are in the middle of a divorce settlement and he had been living separately from them. However, he devotes himself to searching for their daughter after her disappearance, and believes that she is safe. As the search goes on, he begins to reexamine their lost family ties.

Yui Ryoko as Ishioka Akina
The mother of the missing Ishioka Aoi. She is distressed after becoming the target of public abuse because she had been meeting a man at the time her daughter disappeared.

Hiraiwa Kami as Nara Mayuko
Nara Kenichi’s younger sister. She has built and emotional wall ever since an incident happened to her during her student days. She attempts to get back into society with the support of her older brother, but … …

Horibe Keisuke as Hiruma Kensaku
The director of Saitama Prefectural Police’s First Investigation Division. He is in command of Ishioka Aoi’s case. He has faith in his subordinate Nara Kenichi and supports him.

Yonekura Reai as Ishioka Saki
The older sister of Ishioka Aoi. She is being bullied in junior high school because of her family’s situation. She believes that Aoi will be found and also solicits information on her sister.

This blog contains information and musings on current and upcoming Japanese dramas but is not intended to be comprehensive.
View all posts by jadefrost →
This entry was posted in Summer 2022 Dramas, WOWOW and tagged Ame ni Kieta Himawari, Muro Tsuyoshi. Bookmark the permalink.