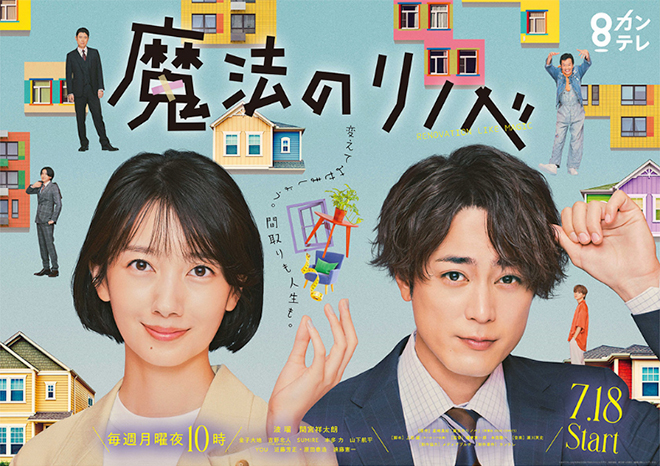 Synopsis
Fukuyama Gennosuke, a twice divorced single father of a 7-year-old boy, quit his job as a salaryman and started work in sales at Marufuku Builders which his family runs. However, he has yet to make a sale due to his lack of aggressiveness which comes from his good nature. His father Kuranosuke, who is Marufuku Builders’s CEO, and third brother Tatsunosuke, who handles design, are apprehensive about his future as a salesman. One day, Shingyoji Kome joins Marufuku Builders to strengthen the team. Kuranosuke had hit it off with her through his mountain climbing hobby. She was the sales ace at a major home improvement company with her wealth of knowledge based on experience and excellent eye for detail. Kome is teamed up with Gennosuke and has to double as his mentor. While they make an odd pair in sales, they are two persons with low esteem who truly need to change their own personal lives. Despite being polar opposites, Kome and Gennosuke also have points in common. They work together to solve problems, ranging from marital discord to bad fengshui and troublesome pets that clients and their families do not even realise, through home renovation proposals. Their first client is a married couple, Nishizaki Machi and Kazunori, who live in a 60-year-old detached house and want a renovation quote. Since the husband is eager to do away with the old-fashioned layout of the house and veranda to create a spacious living room and modern Japanese kitchen, Gennosuke wants to quickly close the contract. But Kome gives him zero points as a salesman … …

Characters
Haru as Shingyoji Kome
She changes sales jobs from Global Stellar D Homes to Marufuku Builders where she is teamed up with Fukuyama Gennosuke and also made his mentor. She was the sales ace in her previous job and delivered an outstanding sales performance. Her life at work was going smoothly until she was forced to quit as a result of a huge blunder just before she turned 30. She eats well and sleeps well – she can in fact sleep anywhere. On her days off, she goes mountain climbing with her good friend Harukawa Mikoto to let off stress.

Mamiya Shotaro as Fukuyama Gennosuke
The eldest son of the Fukuyama family. He is in charge of sales at Marufuku Builders. He quit his job as a salaryman about a year ago and joined the family business. But he has yet to make a sale due to his lack of aggressiveness which comes from his good nature. In addition, he has a tendency to be pushed around by females and is now a twice divorced single father with a 7-year-old son, Shinnosuke. Called “apologetic Gen”, his special skill is making apologies.

Endo Kenichi as Fukuyama Kuranosuke
Fukuyama Gennosuke’s father. The jovial and approachable CEO of Marufuku Builders. He became acquainted with Shingyoji Kome through mountain climbing which is his hobby, and scouted her to reform his company. He is compassionate, popular and even admired by old-fashioned artisans. A good father and grandfather in the all-male household, he is motherly at times and backs up his family and employees.

Yoshino Hokuto as Fukuyama Tatsunosuke
The third and youngest son of the Fukuyama family. He is in charge of design. Despite being cool, aloof and popular with females, a part of him is a little wanting. He uses his professional judgement to plan the most suitable renovation based on a client’s scope of work.

Sumire as Harukawa Mikoto
An illustrator who has been Shingyoji Kome’s friend since university. The two of them are mountain climbing partners. While she would say, “Don’t bring mundane stories with you. Leave your work and romance at the foot of the mountain and come,” she has a good understanding of Kome and they would end up talking about anything. She seems to be the offbeat type but is someone who lives true to herself.

Kaneko Daichi as Kubodera Akira
A salesman at Global Stellar D Homes. Shingyoji Kome’s former junior colleague and ex-boyfriend. He shows up as Kome’s rival after she changes jobs to work for Marufuku Builders and they end up in direct competition. Although he is affable, straightforward, simple-minded and good at gaining people’s trust, he lacks the ability to understand women and has had many failures. As he is not a bad guy at heart, he is somehow impossible to hate.

Harada Taizo as Arikawa Hiraku
Shingyoji Kome’s former boss at Global Stellar D Homes. The department manager of the Kanto area of the renovation business division, he is very ambitious and unhappy with his position and acts arrogant about working his way up the ranks. While he valued Kome’s capabilities, he felt bitter that she was beyond his control. A man of many mysteries, he continues to be concerned about her movements even after she has gone to work for Marufuku Builders, and is plotting something.

This blog contains information and musings on current and upcoming Japanese dramas but is not intended to be comprehensive.
View all posts by jadefrost →
This entry was posted in Uncategorized and tagged Endo Kenichi, Harada Taizo, Haru, Maho no Rinobe, Mamiya Shotaro. Bookmark the permalink.