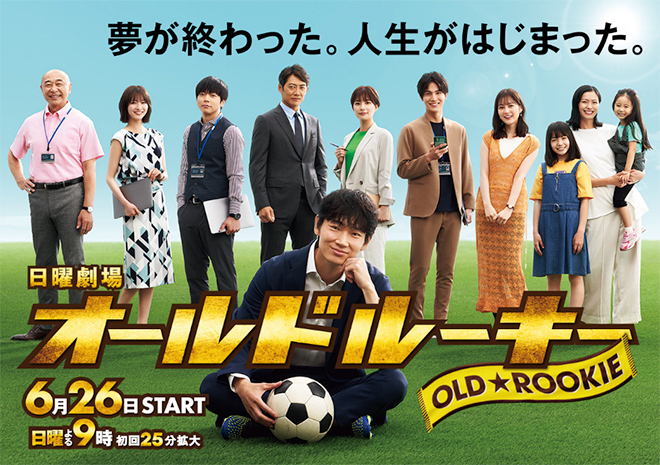 Synopsis
At the age of 37, former national soccer player Shinmachi Ryotaro is past his peak as an athlete. But he still plays for the club, Genma Hachioji, in the J3 League. One day, he is suddenly informed that Genma Hachioji will be disbanded. Unable to find another club that he can transfer to, Ryotaro is forced to retire as a soccer player. He has an outstanding housing loan and will have to pay for the education of his two daughters 10-year-old Izumi and 5-year-old Meisa. Ryotaro realises that he has no skills besides soccer and it is rather late for him to join the workforce now. As Izumi and Meisa are proud of him for being a soccer player, he cannot break the news of his retirement to them until he can tell them about his second career. That is when Takayanagi Masashi, the CEO of Victory, gets in touch with Ryotaro to ask if he would like to try working for them. Victory is a sports management company that he had consulted on a transfer after Genma Hachioji wound up. Ryotaro decides to work in this line on account of his wholehearted love and respect for sports even though it involves working behind the scene as a representative and manager of athletes. He is happy to get started and Takayanagi instructs him to team up with a young colleague Fukazawa Toko. Even so, Ryotaro still has difficulty coming to terms with his retirement. It is not easy to change jobs at 37 and he also faces a big hurdle in his first assignment at Victory. Will Ryotaro be able to reconcile with new challenges as an old rookie?

Characters
Ayano Go as Shinmachi Ryotaro
A former professional soccer player who is extremely upbeat. Suddenly forced to retire at the age of 3, he ends up making his debut in the workforce when he joins sports management company Victory. Although he also decided to work for his daughters’ sake, somewhere in his heart, he has not quite accepted his retirement.

Yoshine Kyoko as Fukazawa Toko
An employee at Victory. She is a hardworking career woman who has a very strong sense of responsibility. She has gained management’s trust and has been put in charge of seven athletes in her fifth year with the company. She once aspired to be a TV presenter and joined the company with the hope that she will be able to get married to a sportsman. She gets teamed up with Shinmachi Ryotaro as his mentor.

Nakagawa Taishi as Jo Takuya
He joined Victory because he loves sports and enjoys work which feels like play to him. He is pure, fresh and the life of the team. He genuinely loves soccer and started liking the game because he respects and admires Shinmachi Ryotaro who represented the national team.

Masuda Takahisa as Umeyashiki Sota
Regarded as a top employee at Victory, he does everything flawlessly and has very good communication skills. However, he is very insecure about his own academic achievements that he sees colleagues who are good at their work and juniors who surpass him as rivals.

Takahashi Katsumi as Katsushika Goro
Victory’s longest serving employee. He is a leader who functions like a stopper to the youthful subordinates. A genial and caring man whose smile belies the many ordeals he had to overcome. He is the only person that CEO Takayanagi Masashi opens up to. Like Shinmachi Ryotaro, he also faced a setback in the past … …

Eikura Nana as Shinmachi Kanako
Shinmachi Ryotaro’s wife. A former popular presenter who is now a full-time housewife. As Ryotaro’s greatest supporter, she is occasionally stern with him but gently encourages him at other times. While she is fiercely supportive of his second career because they need to bring up their two daughters, she also decides to take action for the family’s sake.

Sorimachi Takashi as Takayanagi Masashi
The CEO of Victory. His philosophy is to respect all athletes and he is a reasonable man. He actually has a motive for letting Shinmachi Ryotaro, who has no other skills besides soccer, join the company … …

This blog contains information and musings on current and upcoming Japanese dramas but is not intended to be comprehensive.
View all posts by jadefrost →
This entry was posted in Summer 2022 Dramas, TBS/MBS and tagged Ayano Go, Old Rookie, Sorimachi Takashi. Bookmark the permalink.