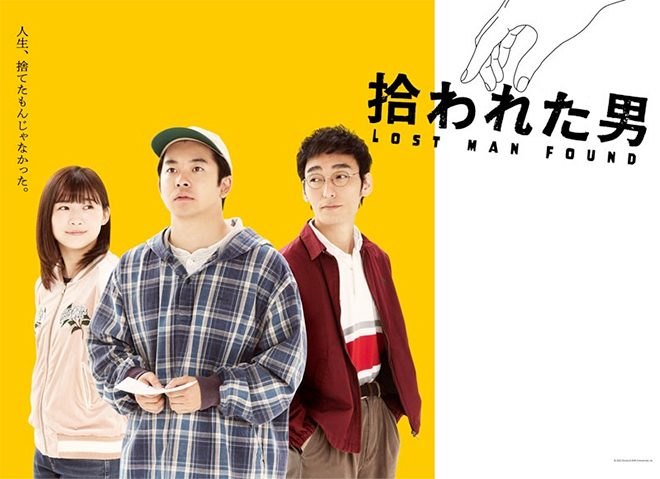 Synopsis
Matsudo Satoru’s dream of becoming an actor took root the moment he watched a play in high school. He moves from his hometown of Nishinomiya in Hyogo Prefecture to bunk in at his childhood friend Sugita’s apartment in Omotesando, Tokyo. While Sugita is leading a fulfilling life, Satoru is poor and cannot even get an audition. One day, he picks up a plane ticket that had dropped beneath a vending machine. It bears the name Yamamura, who turns out to be the CEO of an entertainment agency. She picks Satoru up for her agency and his career as an actor gets off to a start. This is an unexpected “opportunity” for Satoru although he continues to fail at auditions while juggling work as a driver for a popular actress and a part-timer at a video rental shop at night. Through numerous encounters in his life, he eventually becomes Matsudo Satoru, the actor whose face is often seen on TV and in movies and also finds the love of his life. After acting in a movie that was released across the US, Satoru receives a sudden phone call from the country. Contrary to his expectations of an offer from Hollywood, the caller informs him that his older brother Takeshi, who cut contact with the family since he went to the US, has collapsed. This time, Satoru who has been helped by people, sets off on a trip to the US to “pick up” his brother, not knowing that there will be many more unexpected encounters awaiting him … …

Characters
Nakano Taiga as Matsudo Satoru
He came to Tokyo with no money or connections and only his dream of becoming an actor. He continues to work part time at a video rental shop while failing at auditions and getting into debt. However, he is blessed with good fortune and fate, and his life transforms after he picks up a plane ticket.

Kusanagi Tsuyoshi as Matsudo Takeshi
Matsudo Satoru’s older brother. Satoru’s impression of him is of an impassive and inscrutable person. He suddenly set off for the US after some comment from their father. But the family has not heard a word from him in 15 years after he dropped out of university.

Ito Sairi as Higa Yui
A fellow part-timer whom Matsudo Satoru meets at the video rental store. She has problems with her ex-boyfriend but her life changes after encountering Satoru. She respects him for working hard for his dream, and eventually becomes a partner who brings him good luck.

Yakushimaru Hiroko as Yamamura
The owner of the plane ticket that Matsudo Satoru picked up. She is the CEO of an entertainment agency which primarily cultivates models. She takes a fancy to Satoru who has the old-fashioned looks of someone from the Showa period that is rare these days, and brings him on board.

Kazama Morio as Matsudo Heizo
Matsudo Satoru’s obstinate father who is an electrician. He observes unusual house rules and created distance between himself and his two sons.

Ishino Mako as Matsudo Kiku
Matsudo Satoru’s mother who is submissive to her husband and a little prone to silly mistakes. Her joking words that Satoru was a child they picked up, has caused him trauma.

Suzuki Anne as Hitachi
A manager at FMC, the entertainment agency that Yamamura runs. She is in charge of the actress Igawa Haruka but also becomes Matsudo Satoru’s manager. She alternates between being stern and kind with Satoru and brings him a job that will become his turning point in life.

Kaname Jun as Tsukamoto
Matsudo Satoru’s fellow part-timer who aspires to be a film director. He has wanted to film a movie for years but cannot write an interesting script. He adores Igawa Haruka.

Daito Shunsuke as Sugita
Matsudo Satoru’s childhood friend. Satoru relies on him when he comes up to Tokyo. His dream of becoming a model has not worked out but he finds a way of life in their hometown and becomes Satoru’s longtime friend.

This blog contains information and musings on current and upcoming Japanese dramas but is not intended to be comprehensive.
View all posts by jadefrost →
This entry was posted in NHK, Summer 2022 Dramas and tagged Hirowareta Otoko, Ito Sairi, Kusanagi Tsuyoshi, Suzuki Anne. Bookmark the permalink.