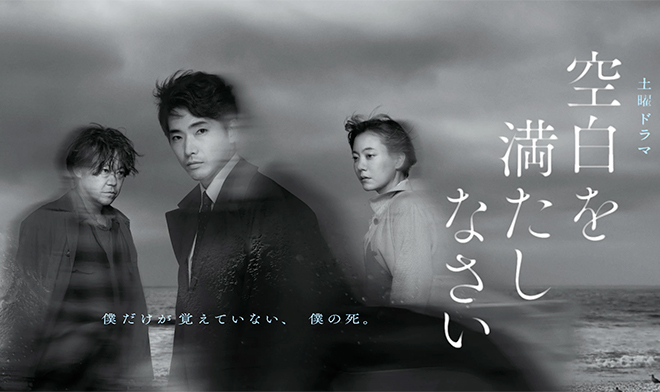 Synopsis
Tsuchiya Tetsuo suddenly wakes up one night in his company’s meeting room. When he goes home like usual, his wife Chika seems out of sorts. She is lost for words and frightened. He goes to awaken their 1-year-old son Riku but the boy is clearly 4 years old. A public official eventually comes to visit and tells Tetsuo, “You died three years ago.” The news on TV and the internet is filled with a string of stories about the resurrection of people who are supposedly dead all over the world. However, Tetsuo has no memory of his own death. It is said that he fell from the rooftop of his company but he is frustrated that he has absolutely no recollection whether his death was an accident or suicide. Why did he have to die and leave his beloved wife and young son behind? While tring to find the reason, Tetsuo remembers being shadowed by the security guard Saeki when he was still alive. He pursues the truth as the mystery deepens. However, Chika seems to be hiding something. Each person’s dark side is revealed little by little.

Characters
Emoto Tasuku as Tsuchiya Tetsuo
A man who suddenly returns from the dead one day. He died from a fall from his company’s rooftop three years earlier but he has no memory of it and seeks the truth behind his death.

Suzuki Anne as Tsuchiya Chika
Tsuchiya Tetsuo’s wife. After his death, she raised their young son Riku on her own.

Hagiwara Masato as Akiyoshi
A good friend of Tsuchiya Tetsuo and Chika. He runs a discount store.

Fujimori Shingo as Kinoshita
The CEO of an IT start-up who has also returned from the dead like Tsuchiya Tetsuo.

Watanabe Ikkei as Anzai
Tsuchiya Tetsuo’s former boss. A department manager at the can manufacturing company.

Ujiki Tsuyoshi as Gonda
The factory manager of the can manufacturing company that Tsuchiya Tetsuo worked at. He and Tetsuo are family friends.

Abe Sadao as Saeki
A man who was a security guard at Tsuchiya Tetsuo’s workplace. Ever since he was questioned for kicking a pigeon to death, he started to follow Tetsuo about.

This blog contains information and musings on current and upcoming Japanese dramas but is not intended to be comprehensive.
View all posts by jadefrost →
This entry was posted in NHK, Summer 2022 Dramas and tagged Abe Sadao, Emoto Tasuku, Kuhaku o Mitashinasai, Suzuki Anne. Bookmark the permalink.