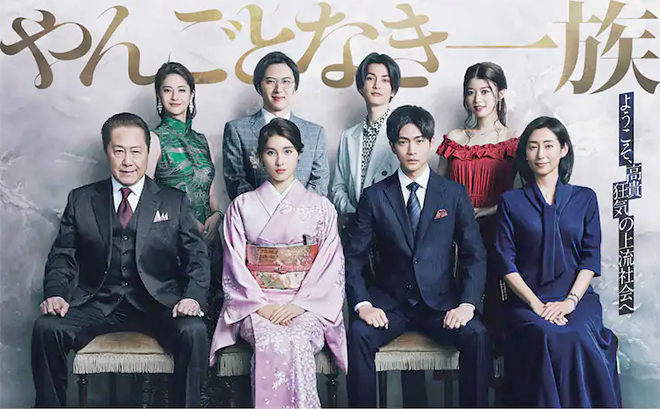 Synopsis
Shinohara Sato grew up in a working class neighbourhood and runs an eatery called Manpukuya with her mother Yoshie. She is a cheerful and steely young woman whom regular customers are fond of. She has been dating Miyama Kenta for some time and accepts his marriage proposal. On the day she is to go and pay her respects to his family, a posh limousine appears in front of the eatery to pick them up. It turns out that Kenta is the second son of the distinguished Miyama family that traces its origins more than 400 years back to the Edo Period and has vast assets. Surprised by Kenta’s roots, Sato worries whether his parents will like her. Kenta confesses his reason for distancing himself from his family and assures her that his father Keiichi wanted to meet her. Since he was a child, Kenta abhorred the authoritarian Keiichi and the family’s customs. He left home during his student days, and eventually got a job with a company unrelated to the family. However, when they arrive at the house, Kenta’s mother Kumi turns Sato away at the front door on Keiichi’s orders. He is strongly against the union because she is a commoner. Believing in the honest and unpretentious Kenta, Sato runs off with him and registers their marriage at the same time. The couple get swept up in old-fashioned customs that are typical of high society as well as complicated relationships within the family. But when Sato learns of Kenta’s desire to turn the Miyamas into a normal family where no one gets hurt and sacrificed for their sake and there are no battles between relatives, she decides to take on the challenge … …

Characters
Tsuchiya Tao as Shinohara/Miyama Sato
A tenacious and bright young woman who grew up in a working class neighbourhood. She is dearly loved by Manpukuya’s regular customers. Her boyfriend Miyama Kenta proposes marriage and she accepts. However, there is strong opposition to their marriage from his family members because of the disparity in status. Believing in Kenta, she runs off with him and registers their marriage. At first, she disagrees with lots of the family’s outdated customs but when she learns of Kenta’s innermost desire to make the Miyamas an ordinary family, she decides to enter the family and do battle alongside him.

Matsushita Kohei as Miyama Kenta
Shinohara Sato’s husband. He is the second son of a distinguished family which has a history of over 400 years. A well-educated, cheerful gentleman who does not put on any airs. He has felt repulsed by the customs of his autocratic father and the family from a young age and started living on his own after leaving home when he was still a student. Then he met Shinohara Sato and longs to have a warm family like hers. He wishes that the Miyamas will be a normal family where no one gets hurt and sacrificed for the family’s sake and there are no battles between relatives. After marrying Sato, he starts living with his family again as a result of his father’s ploy.

Ishibashi Ryo as Miyama Keiichi
The head of the Miyamas. Shinohara Sato’s father-in-law. As the head of the family since the Edo period, he has a huge ego from holding fast to the ancestral land and fortune and an autocratic style of making all decisions for the family. He puts the family’s interests above all else and would coldly eliminate people and things that go against his wishes by whatever means necessary. He does not acknowledge the ordinary Shinohara Sato and is fiercely opposed to their marriage because of the disparity in status.

Kimura Tae as Miyama Kumi
Miyama Keiichi’s wife. Although she is the lady of the house, she obeys her husband’s orders. She also does not voice any complaints about his unreasonable behaviour and concentrates on enduring each day in order to protect her dear children. She worries about Shinohara Sato and is the only one in the family that treats her kindly. She silently supports Sato and her son in their struggle to change the family’s ways.

Ishino Mako as Shinohara Yoshie
Shinohara Sato’s mother. She and Sato have been running the eatery Manpukuya, which is loved by the locals, ever since her husband passed away several years ago. She dotes on Miyama Kenta who is a regular customer at Mapukuya and blesses their marriage from the bottom of her heart. She is apprehensive but supportive of her precious daughter marrying into the Miyama family.

Onoe Matsuya as Miyama Akito
The Miyamas’ eldest son. He is reserved and does not want to stand out. He works at the real estate company that his father runs and as the heir, he is referred to as the next in line for the position of CEO. However, his lack of ambition and timidity proves to be a handicap in the eyes of Keiichi. With the return of his younger brother Kenta to the family, his position as the heir becomes precarious. While he is inwardly envious of Kenta and his wife Sato for trying to change the family, he dislikes himself for not being strong.

Matsumoto Wakana as Miyama Mihoko
Miyama Akito’s wife. The daughter of a family that runs a traditional Japanese confectionary shop of long standing, she is devoted to the Miyamas. She accommodates the Miyamas’ unreasonable customs and is also highly regarded by relatives. She plans to improve her standing in the family by making Akito the heir, but she has a big secret that she cannot tell anyone. She treats Shinohara Sato, who is line to be the next lady of the house, as her enemy.

Watanabe Keisuke as Miyama Daisuke
The Miyamas’ third son. He is a free-spirited optimist. The owner of an aesthetics clinic given by his father Keiichi, he and his wife Ritsuko live a glitzy life surrounded by fancy items. They seem the ideal happily married couple that everyone yearns to be. But in truth, this is a political union that his father forced him into for the sake of the family and they are in a loveless marriage.

Baba Fumika as Miyama Arisa
The Miyamas’ youngest child. She is a university student and the only one among the siblings who is not married. She is artless, says whatever she feels and frequently acts in an embarrassing manner due to her wilfulness as the youngest daughter. Although she coldly watches her brother Kenta and Shinohara Sato struggle to change the family’s ways, she is quite fed up with the family’s outdated customs.

Baisho Mitsuko as Miyama Yasuko
Miyama Keiichi’s mother. The former lady of the house. She has a dignified air and commands such a lofty position in high society that everyone must be deferential to her. She values the family’s customs and believes the wife of the family’s heir has to devote her entire life to the progress of the clan. She had been recuperating after suffering a back injury but starts living with the family again after her grandson Kenta marries Shinohara Sato.

Theme Song
Walkin’ In My Lane by milet

This blog contains information and musings on current and upcoming Japanese dramas but is not intended to be comprehensive.
View all posts by jadefrost →
This entry was posted in Fuji TV, Spring 2022 Dramas and tagged Ishibashi Ryo, Kimura Tae, Matsushita Kohei, Tsuchiya Tao, Yangotonaki Ichizoku. Bookmark the permalink.