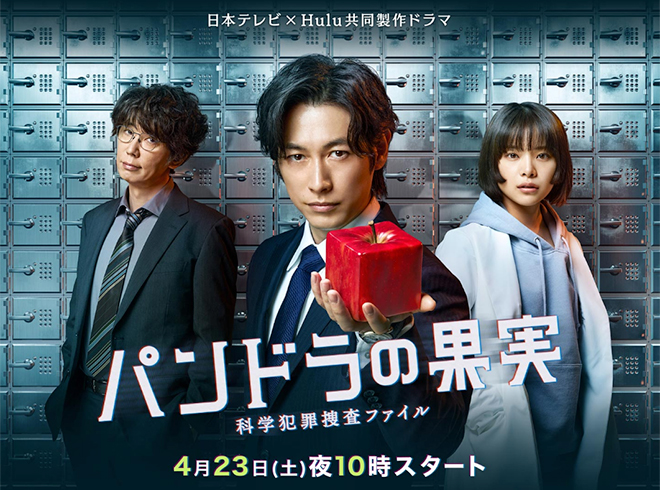 Synopsis
Kohiruimaki Yuichi established the Scientific Crime Investigation Unit at the Tokyo Metropolitan Police Department, specialising in cases involving the most advanced science and technology. He makes Hasebe Tsutomu, a veteran detective formerly from the First Investigation Division who knows little of science, a member of the unit for some reason. Although Hasebe is not satisfied with Kohiruimaki’s reason for summoning him, Kohiruimaki merely says that he believes that he needs him. That is when the Scientific Crime Investigation Unit’s first case happens. The dead body of Yasui, the CEO of Kagura Technology which is involved in the development of cutting-edge robots, has been found. He was confined in the company’s simulation room where the robots’ movements are tested, and deliberately suffocated. Kohiruimaki and Hasebe visit the suspect Leo – a robot equipped with AI that was created by Kagura Technology for nursing care. The chief of the research development team denies the possibility of Leo committing murder. However, Leo confesses to killing Yasui in front of everyone. This confession from a robot is in itself unheard of. Can a robot that should not inflict harm on people, kill someone of its own will? Kohiruimaki decides to enlist the help of Mogami Yukiko, a young genius scientist who has a detailed knowledge of different science disciplines but disappeared from the scientific community all of a sudden three years ago. Together with Mogami, he takes on crimes that legislation and the police organisation cannot keep up with, figuring them out by investigating the hidden science behind the cases.

Characters
Dean Fujioka as Kohiruimaki Yuichi
He graduated at the top of his class from Teito University’s Department of Biotechnology and joined the National Police Agency. A romantic who believes in the power of science and that it can contribute to the wellbeing of the human race. Since his beloved wife Ami passed away five years ago, he has been raising their daughter Sera as a single father. He established the Scientific Crime Investigation Unit and tackles mysterious cases. He actually has a big secret regarding his wife.

Kishii Yukino as Mogami Yukiko
A genius scientist who has published a number of papers on her groundbreaking research in various disciplines with a focus on molecular biology. She has extensive knowledge and explores all possibilities. Facts are most important to her. While she was researching a newly discovered virus, she got a glimpse of the darkness of science and withdrew from the scientific community. She decides to accept Kohiruimaki Yuichi’s invitation and becomes the Scientific Crime Investigation Unit’s adviser.

Santamaria Yusuke as Hasebe Tsutomu
Although he is not strong in science, he is an outstanding detective who worked his way up the ranks and has many years of field experience from his time at the Tokyo Metropolitan Police Department’s First Investigation Division. His arrest rate is constantly one of the best at the Tokyo Metropolitan Police Department. Kohiruimaki Yuichi values his investigation skills and has made him a member of the Scientific Crime Investigation Unit.

Sato Ryuta as Saegusa Masuo
Kohiruimaki Yuichi’s junior from university days. A bureaucrat at the Ministry of Health, Labour and Welfare who is now the head of a division. He is good at gaining people’s trust and is a family friend of Kohiruimaki. He helps Kohiruimaki by providing him with all sorts of valuable information.

Itao Itsuji as Shimazaki Hiroya
The head of the National Police Agency’s Criminal Investigation Bureau. Kohiruimaki Yuichi’s boss. He supports the establishment of the Scientific Crime Investigation Unit to deal with new types of crime that use the power of science. A trusted boss who has a strong sense of justice and responsibility.

Motokariya Yuika as Kohiruimaki Ami
Kohiruimaki Yuichi’s late wife. She went into a coma after giving birth to their daughter Sera and passed away without ever getting to hold her.

Ando Masanobu as Carl Kahn
The charismatic founder and CEO of Body Hackers Japan, which brings together transhumanists who advocate advancing the human race through the use of technology. He is a mysterious man who cooperates with the Scientific Crime Investigation Unit’s investigations at times. But at other times, he stands in their way. He once tried to bring Mogami Yukiko on board as a researcher.

This blog contains information and musings on current and upcoming Japanese dramas but is not intended to be comprehensive.
View all posts by jadefrost →
This entry was posted in NTV, Spring 2022 Dramas and tagged Dean Fujioka, Pandora no Kajitsu Series. Bookmark the permalink.