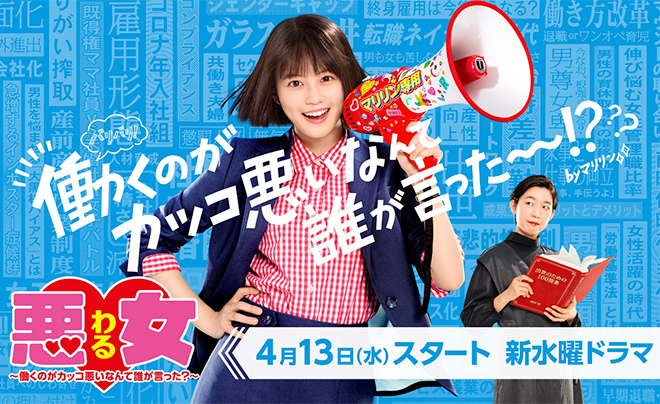 Synopsis
Despite graduating from a third-rate university with even worse grades, the incredibly cheerful but rather inept Tanaka Maririn joins a major IT company Ohmi with big dreams. However, she is assigned to the Supplies Management Division where a cool colleague Minegishi Yuki becomes her senior. Located in the basement, the division is a place where employees who are a burden to the company are transferred. Minegishi is quite harsh as she tells Maririn that nothing is expected of her. Other employees including Ono Tadashi whom Maririn delivered supplies to, are also hard on her. However, Maririn keeps her chin up. Little wonder then that the reason why she is so hardworking and headstrong is because she wants to get closer to T.O-san whom she fell in love with at first sight but whose name she does not even know. Maririn follows Minegishi about and asks her for more work. Giving in to Maririn’s tenacity, Minegishi mysteriously instructs her to remember the faces and names of the cleaning staff in this building. Meanwhile, Oi Mika, a young third-year employee working in the Sales Department who is one of those called the batch that joined during COVID, feels out of place at the company. She dislikes Maririn whose name everyone remembers soon after she joined Oumi Co. As Mika finds herself facing a crisis when a potential client backs out of signing a contract, Maririn butts in even though it has nothing to do with her. Through this incident, Minegishi sees Maririn’s potential. Her words asking Maririn if she does not want to advance in her career, completely changes Maririn’s life at the company. There is a reason why Minegishi is guiding her. As Maririn gets involved in the workplace problems of colleagues in each division, she starts moving up from the lowest rung of the corporate ladder with her innate positivity and Minegishi’s rather shrewd advice.

Characters
Imada Mio as Tanaka Maririn
A new employee at Ohmi. She graduated from a third-rate university with lousy results but was fortunate enough to get a job at a major IT company. Besides being a big eater and good drinker, she is exceptionally obtuse to other people’s animosity. She possesses the special ability to make others help her.

Eguchi Noriko as Minegishi Yuki
Tanaka Maririn’s senior in the Equipment Management Division. Although her past is a mystery, she recognises Maririn’s potential. At times, she is kind and at other times, she coolly gives her a helping hand to get ahead. As she watches Maririn work hard, this reignites the ambition that has lain dormant within her.

Suzuki Nobuyuki as Ono Tadashi
A promising elite employee at Ohmi. He joined the company nine years ago and his boss has great expectations of him. He does not like those with no capability and looks down on Maririn. He still believes men are superior to women although he never expresses it out loud. He does not go well with Maririn in the beginning, but his impression gradually changes after he gets to know more about her.

Mukai Osamu as T.O-san
The man whom Tanaka Maririn fell in love with at first sight. He says that he is also an employee of Ohmi but she neither knows his department nor name. She can only rely on his initials but finds out from a search of the HR system that he is Tamura Osamu and belongs to the International Business Department. He has a link with Minegishi Yuki…?

This blog contains information and musings on current and upcoming Japanese dramas but is not intended to be comprehensive.
View all posts by jadefrost →
This entry was posted in NTV, Spring 2022 Dramas and tagged Eguchi Noriko, Imada Mio, Mukai Osamu, Waru (2022). Bookmark the permalink.