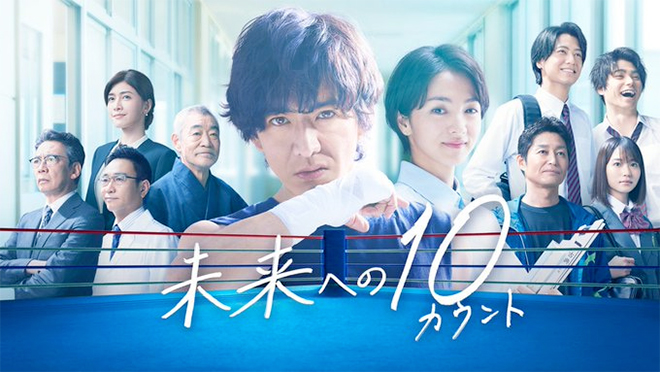 Synopsis
Kirisawa Shogo becomes the coach of Matsubadai High School’s boxing club some 30 years after he won four boxing titles as a high school student. However, his life shone for only that brief moment. In fact, he gave up boxing during his second year in university for some reason. After his beloved wife died, he experienced even more misfortune. Now he has completely lost any desire to live and even declares that he does not mind dying at any time. Kai Seiichiro, his good friend who sweated it out with him in the boxing club back in high school days, tries to cheer him up. However, Kirisawa seems like a changed man and stubbornly refuses to imagine a brighter future. Genuinely worried about him, Kai consults their former coach Ashiya Kenzo and Kirisawa is about to be selected as Ashiya’s successor at the boxing club. While he is naturally very much against it, he can hardly refuse when Ashiya kneels and bows until his forehead touches the floor. Kirisawa goes back to their alma mater as a temporary coach. Matsubadai High School now produces students who can enter Tokyo University unlike in the past. After Ashiya’s retirement, the boxing club weakened very quickly. Furthermore, the school’s principal Oba Makoto plots to shut down the club in the near future under the pretext that it lacks the number of members required for it to be recognised as a club activity. Meanwhile, Orihara Aoi is suddenly named the club’s adviser but she lacks the passion and knowledge for the sport. The members of the boxing club have all sorts of impulses as they meet their new coach and new adviser, neither of whom show enthusiasm. But as he watches young boxers with the desire to become strong and to win, Kirisawa’s passion is slowly rekindled and he springs into action. He sincerely engages with the inexperienced, foolhardy students. At the same time he begins to transform them, he also goes through changes and begins to head towards a new future.

Characters
Kimura Takuya as Kirisawa Shogo
Although he won four boxing titles as a high school student, he gave up boxing during his second year in university for some reason. Just as he put this behind him and was trying to start a new life, he not only lost his beloved wife to illness but experienced more adversity and ended up completely overwhelmed. He works part time doing pizza deliveries to make a living while saying that he does not mind dying at any time. That is when he reluctantly accepts his good friend Kai Seiichiro’s suggestion to coach their alma mater’s boxing club.

Mitsushima Hikari as Orihara Aoi
A Japanese language teacher at Matsubadai High School and the adviser to the boxing club. She is a single mother with an 8-year-old son. As she was thrust into the role of the club’s adviser, she feels negatively about it. However, she is serious, forthright and since she cannot stand not knowing things, she becomes curious about boxing. At the same time, the students’ enthusiasm rubs off on her and she comes to embrace the boxing club. Despite repeated clashes with Kirisawa Shogo who has become the coach, she gradually finds herself attracted to him.

Yasuda Ken as Kai Seiichiro
Kirisawa Shogo’s close friend since high school. After graduating from high school, he became a professional boxer. He has retired and now runs Kai Boxing Gym. He is concerned about Kirisawa who has given up on life. Together with the boxing club’s former coach Ashiya Kenzo, he encourages him to become the club’s coach. He meets Orihara Aoi through Kirisawa and takes a liking to her. He spins around in circles because of his desire to show his positive qualities to her.

Takahashi Kaito as Iba Kaito
The head of the boxing club and only member from from the third year. He rejoices about the arrival of Kirisawa Shogo as the club’s coach as he has desperately tried to protect the weakened boxing club from being shut down. He has an earnest and frank nature. Unfortunately, he is not quite cut out for boxing despite his keen enthusiasm and devotion to the sport. He is in fact an A-student who is able to try to qualify for Tokyo University.

Yamada Anna as Mizuno Akari
A second year student who is the only female member of the boxing club. She trains with a passion for boxing that puts the male members to shame. At first, she is distrustful of Kirisawa Shogo who does not show enthusiasm for the boxing club and she opposes him but … … She joined the club because she wanted to become strong and there are some circumstances behind tt.

Yashima Norito as Maji Masami
Matsubadai High School’s chemistry teacher. He had served as the adviser to the boxing club but stepped down to become the adviser to the shogi club at the time Kirisawa Shogo was set to become the coach. In fact, he is filled with hate for boxing due to a personal experience in the past and he makes snide remarks at those involved in the club including Kirisawa.

Uchida Yuki as Oba Makoto
Matsubadai High School’s principal. Her surname is now Oba after she got married. However, she is actually the daughter of Ashiya Kenzo, the boxing club’s former coach. She is an alumni of the school and Kirisawa Shogo was one year her senior. Although she was the boxing club’s manager during her high school days, she has a negative view of boxing now as she devotes herself to making Matsubadai High School the country’s best school. She makes use of vice principal Nekobayashi Hajime and plots various things in an attempt to shut down the club.

Namase Katsuhisa as Nekobayashi Hajime
Matsubadai High School’s vice principal. A minion of principal Oba Makoto. He obeys what she says without questioning. He goes around searching for grounds to shut down the boxing club on her secret orders. He is the type who easily gets carried away. At times, he inadvertently makes repeated remarks that angers her … …

Emoto Akira as Ashiya Kenzo
The former coach of Matsubadai High School’s boxing club. He was Kirisawa Shogo’s teacher. He had been well-known as a strict and fierce coach for 46 years, but relinquished the role because he was suffering from stomach cancer. He is gruff but a compassionate person. When he hears about Kirisawa’s current situation from Kai Seiichiro, he makes every effort to give him a fresh start as the boxing club’s coach. He gets into quarrels with his daughter Oba Makoto each time he sees her.

This blog contains information and musings on current and upcoming Japanese dramas but is not intended to be comprehensive.
View all posts by jadefrost →
This entry was posted in Spring 2022 Dramas, TV Asahi and tagged Emoto Akira, Kimura Takuya, Mirai e no 10 Count, Mitsushima Hikari, Namase Katsuhisa, Uchida Yuki, Yasuda Ken. Bookmark the permalink.