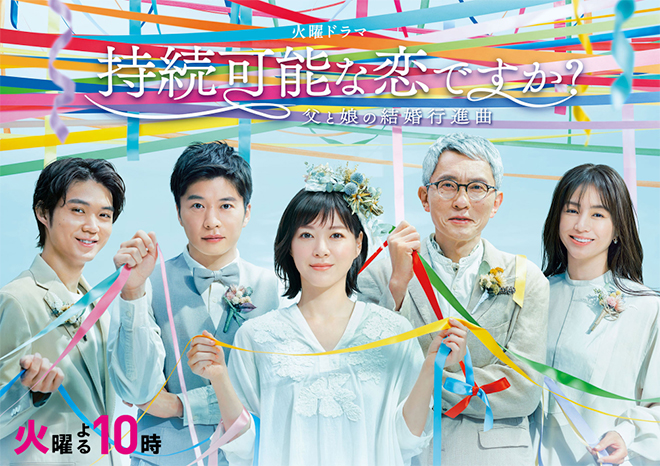 Synopsis
Yoga instructor Sawada Kyoka lives with her father Rintaro, a Japanese language scholar and lexicographer. Unable to bear watching her forlorn father who was barely able to carry on living after her mother Yoko passed away two years ago, she returned to the family home. Kyoka keeps up the appearance of calmness in mind and body in front of her students. But in reality, her personal life is the exact opposite. She wishes to use her own time for herself but she has had to take care of her father who is a burden. Rintaro worries whether Kyoka will be able to get married. However, Kyoka wants to get established as a yoga instructor and has little desire to get married even though she would like a boyfriend. In fact, her misgivings about marriage have grown stronger as she takes care of her father every day. He has been compiling a dictionary and thinks about words 24 hours a day, 365 days a year. As Rintaro left all household matters to his wife, he always vexes Kyoka. One day, Kyoka takes an entrepreneurship course to learn how to strike out on her own and meets Higashimura Seita there. The two of them hit it off and go for a meal together some days later. She suggests that they date without marriage as the premise but he informs her that he is a single father and proposes that they be friends. Meanwhile, Rintaro is organising his late wife’s belongings on her third death anniversary when he finds the divorce papers she had left behind. It is the greatest shock of his life and this revelation makes him decide to find a partner for the second half of his life. Prodded by her father who has challenged her to do the same, Kyoka reluctantly attends a matchmaking party with him but she encounters an unexpected person at the event. This is the start of romance with ups and downs for father and daughter.

Characters
Ueno Juri as Sawada Kyoka
A yoga instructor. She lives with her father Rintaro. In front of her students, she keeps up the appearance of tranquil living in body and spirit but in reality she tends to be sloppy about her daily life and housework since she is kind of laid back. Although she cares about her father, she constantly quarrels with him due to personality differences. She has little desire to get married but unexpectedly gets drawn into looking for a marriage partner together with her father.

Matsushige Yutaka as Sawada Rintaro
Sawada Kyoka’s father. A Japanese language scholar who is compiling a dictionary. As a language buff, he thinks about words 24 hours a day, 365 days a year. He cannot look after himself well and also gets on his daughter’s nerves. One day, he finds divorce papers while organising his late wife’s belongings. This discovery prompts him to search for a life partner and he gets the idea of doing it together with Kyoka.

Tanaka Kei as Higashimura Seita
A divorced single father. He is swamped with a lot of things to do every day at the property company that he works for. He meets Sawada Kyoka at an entrepreneurship talk to find a working style that is conducive for himself and his family. He raised his son Nijiro who is now a second grade elementary student with a lot of love. As Nijiro is his priority, he has not considered remarrying. His only interest is eating curry.

Isomura Hayato as Fuwa Hayate
An instructor at Whiz Kids, a private English language after-school day-care centre that Higashimura Seita’s son Nijiro attends. Sawada Kyoka’s childhood friend. They are reunited after 18 years. He is attracted to Kyoka who was his first love and tries to be direct about his feelings for her. He lived abroad for a long time and is a cheerful, friendly free spirit.

Igawa Haruka as Hinata Akari
A cosmetic surgeon who is known as a beautiful doctor. Her cosmetic surgery clinic which she established on her own is doing well. Now that she has the time to spare, she would like a partner to spend her life with and she starts looking for one. She feels that she is of marriageable age now.

Misaki Ayame as Oishi Riho
Sawada Kyoka’s close friend. She is an office lady at a car manufacturer. She is looking for a life partner through matchmaking.

Shimizu Kurumi as Asagi Suzu
Sawada Kyoka’s close friend. She has been cohabiting with her boyfriend for four years but cannot broach the topic of marriage. She is a receptionist at Hinata Akari’s clinic.

This blog contains information and musings on current and upcoming Japanese dramas but is not intended to be comprehensive.
View all posts by jadefrost →
This entry was posted in Spring 2022 Dramas, TBS/MBS and tagged Jizoku Kanouna Koi desu ka? Chichi to Musume no Kekkon Koushinkyoku, Matsushige Yutaka, Tanaka Kei, Ueno Juri. Bookmark the permalink.